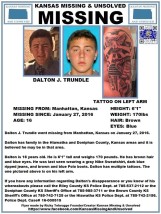 While one area runaway juvenile has been located, another is still missing. Junction city Police announced Sunday night that Allison Blanco, 16, who had been missing since January 31st, had been located.
However Dalton Trundle, 16, who was reported missing from Manhattan January 26th has still apparently not been located. Dalton has family in the Hiawatha and Doniphan county areas and it is believed he may be in that area. He’s described as 6’1″ tall and weighs 170 pounds, with brown hair and blue eyes. He has multiple tatoos and was last seen wearing a gray Nike sweatshirt, dark blue ripped jeans.