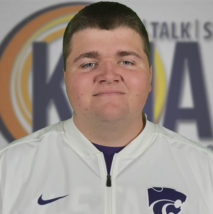 Mason joined Manhattan Broadcasting in the summer of 2017 when he came on to run boards for high school and K-State sports. He began to fill it in on The Game and do play-by-play as well. In July of 2018 he joined The Game full time, as well as taking over as one of the lead voices of high school sports play-by-play at MBC. In addition, Mason does play-by-play for select K-State baseball and volleyball games and makes appearances on the KMAN Morning News. He also hosts Scoreboard Saturday at 8:00 AM every fall and winter Saturday on KMAN and has co-hosted Powercat Gameday.

Both of his parents attended Kansas State and following in their path, he only applied to K-State. Mason is a 2020 graduate from the AQ Miller School of Journalism at Kansas State, having his actual graduation ceremony delayed by the COVID-19 pandemic of 2020. Mason’s favorite sport is baseball and his favorite sports moment is the Royals winning the 2015 World Series. He has seen 26/30 Major League teams in action and has been to nine different ballparks, with the ultimate goal to see all 30 teams and all 30 active stadiums.

Originally hailing from Hutchinson, Mason attended Buhler High where he played golf and won a Hutchinson City Junior Championship his senior year. He knows nothing about music but loves to spend his free time golfing and on PlayStation. He is also marrying his fiance, Bailey (Bud as she is known on “The Game”) in December of 2020.