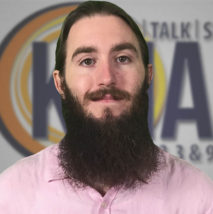 Nick started out at Manhattan Broadcasting in April 2018 and jumped right in to covering the Manhattan City Commission. He’s since expanded into reporting on other local boards and agencies, including the Riley County Law Board, as well as helping to produce and host Saturday editions of the KMAN Morning Show and filling in as needed on weekday editions.

Nick got his start in reporting and broadcasting at Los Angeles Pierce College in Woodland Hills, California where he earned an associate degree in journalism in 2015. There, he worked as opinion section and editorial editor of the student-run Roundup newspaper for a year as well as managing editor of the paper for half a year. He also served as program director and chief engineer of Pierce’s student-run internet radio station KPCRadio.com for a year. He received numerous Media Arts Department awards for his work in print and broadcast and was recognized for student leadership by the Journalism Association of Community Colleges.
Nick transferred to California State University, Long Beach where he earned his bachelor’s degree in journalism with a minor in “American Indian studies” in 2017. Nick worked briefly as a photographer for the Daily 49er newspaper before writing for the Dig Magazine and producing news for KBeach Radio (now 22 West Radio), all student-run organizations. He received a Department of Journalism and Public Relations award for excellence in magazine writing in addition to an achievement award for contributions to KBeach Radio News.
Nick was born and raised in Los Angeles County and relocated to Manhattan after graduation to follow his long-time girlfriend who is working on her doctorate in mathematics. He’s a California boy through and through, but will concede that Freddy’s is at least as good as In-N-Out — which gets him in trouble with his friends back home.