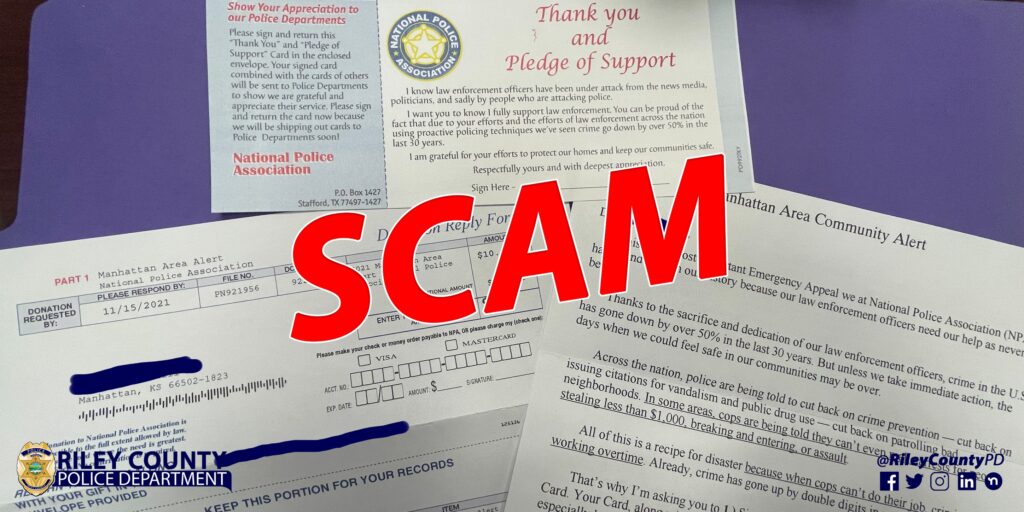 Letters like these have been circulating in Manhattan. RCPD says it’s a scam and that money raised by this organization doesn’t actually go to any local law enforcement initiatives. (RCPD image)

RCPD said Wednesday, in a now deleted social media post, that the “association” has generated letters in the area with claims they “give law enforcement the crime prevention tools they need.” In reality, RCPD said the money they raise doesn’t actually go to police departments or any other legitimate police organizations.

RCPD says anyone locally wanting to support law enforcement can do so by giving to the Fraternal Order of Police Lodge #17 or the Greater Manhattan Community Foundation.

The National Police Association’s website says it is a 501 (c) 3 non-profit, but it’s come under fire from multiple police departments across the country, who say it is a scam. KMAN reached out to the organization Wednesday for comment about where money collected actually goes to.

In response, Ed Hutchison, NPA President, sent an email referring us to documents on the website, many of which contain links to the organization’s legal work and public service announcements. Hutchison, who said he hadn’t seen RCPD’s post at the time of the email, said he assumed it to be similar to that of other “defamatory” statements made against the organization and would be having an attorney contact the department’s governing board.

RCPD Director Dennis Butler tells KMAN the organization has “had no coordination with RCPD, but would take down the (social media) post.”

Momma always said life is like receiving scam mail, you never know what you’re gonna get.

The National Police Association is a SCAM.

They have recently started sending letters like this one titled “Manhattan Area Community Alert” to MHK residents. pic.twitter.com/byH1rmbKD7