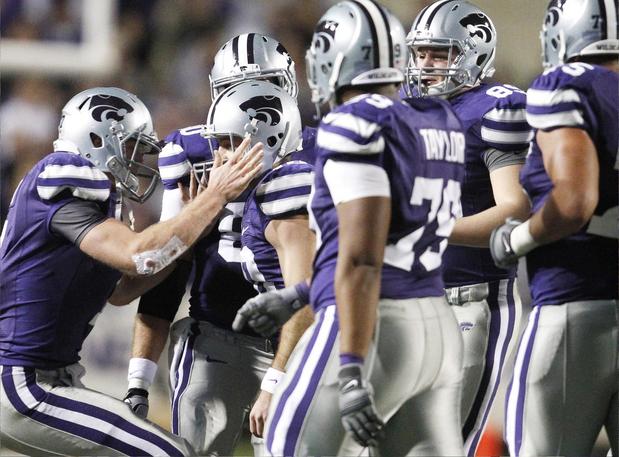 Kansas State junior place kicker Anthony Cantele was named the Big 12 Special Teams Player of the Week, the conference office announced Monday. It was Cantele’s third weekly honor this season and the fourth of his career.

The honor by Cantele was also the ninth by the Wildcats this year, tying the school record originally set by the 1999 squad.

Cantele nailed all three of his field goal attempts in No. 11 Kansas State’s 30-23 win over Iowa State, marking the third time this season he has made three field goals in a game. The junior connected on a 37-yarder in the second quarter, a 47-yard attempt in the third quarter and a 19-yarder in the fourth quarter.

Kansas State finished the regular season with a 10-2 record, including a 7-2 Big 12 mark to finish second in the conference and eighth in the final BCS standings.

The Wildcats were rewarded for their successful season by accepting an invitational to play in the AT&T Cotton Bowl Classic on Jan. 6, 2012, against No. 6 Arkansas. Kickoff is at 7:00pm at Dallas Cowboys Stadium, and Powercat Gameday will start at 3 on SportsRadio 1350 KMAN.