You are at:Home»Local News»2020 U.S. Census self-response numbers down in Riley County and Manhattan

Census numbers down in Riley County and Manhattan

“A lot of that is because college students who are supposed to be counted in the community where they go to school were asked not to come back after spring break due to coronavirus,” Kelley said.

Although college students often don’t have a full-time residence in the town where they attend school, census advocates emphasize that most residents, full-time or not, still use programs funded by tax payers and the government.

Since the census helps determine how billions of dollars in government funds are allocated, census workers are attempting spread the message to college students and anyone else whose full-time residence is in question that they need to participate in the census.

Responding to the 2020 United States Census

The 2020 United States Census is a grand undertaking spanning several months that will eventually play a large role in determining governmental representation and how billions of dollars in government funds are allocated.

For each individual person, however, it only takes a few minutes to complete.

Those participating in the census can do so by filling out a paper form that was sent out earlier this year, going to my2020census.gov where it is available in multiple languages or by calling 844-330-2020.

The U.S. Census Bureau does ask that whoever fills out the form does so for each individual living at that address.

This request is also extended to college students, even if they aren’t living with their roommates at the time the form is being filled out.

“Ideally, you would have a conversation with those roommates, maybe jump on Facetime or Zoom and go over the questions with each other so there’s one questionnaire submitted for that residential address,” Kelley said.

Once the census form is fill out, there are opportunities to get others to fill out their’s as well.

As part of the U.S. Census Bureau’s Call for the Count campaign, which spans June 22-28, Kansas residents are being encouraged to reach out to friends and family to see if they have participated in the census.

A number of activities are also being put on across the state as part of the Call for the Count campaign, including a Census Challenge, social media campaigns and Virtual Questionnaire Assistance.

On June 25 and 28, “Censoteria” (a census-themed version of “Loteria,” a Mexican board game) will take place on Facebook Live and will feature a guest from Sporting KC, which is a professional soccer team located in Kansas City. 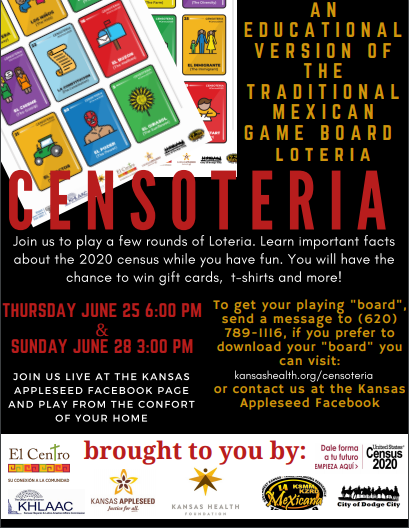