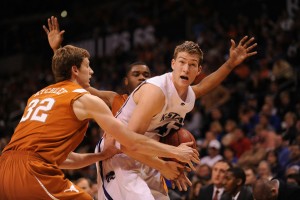 The “White Tiger” will return to Manhattan, according to GoPowercat.com. K-State coach Frank Martin has reportedly named former Wildcat standout Darren Kent to a graduate assistant position on his staff. He steps into the role previously held by Lamont Evans, who is now a full time assistant following the departure of Dalonte Hill. Kent played at K-State from 2005 until 2009, averaging 9 points and 5.8 rebounds per game during his senior season. After leaving K-State, Kent played professionally in France and coached high school basketball in his native Minnesota.