You are at:Home»Local News»ATA bus to only operate on Saturday lines on weekdays 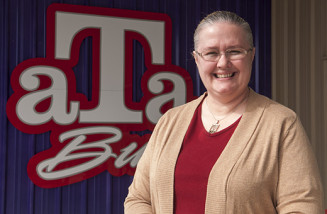 Anne Smith stands by the aTa Bus logo. Smith has been the director of the aTa Bus since 2007. (Courtesy photo)

Executive Director Anne Smith spoke with KMAN remotely on In Focus and says their routes will be changing as a result of the outbreak. Hours of operation will not change, but starting Monday, March 30th, ATA buses will only operate on their Saturday routes. As a result, buses will skip some usual stops and the number of buses on routes will decrease — resulting in buses only coming to each stop about once per hour.

Smith says they’ll also be suspending subscriptions for demand response and those riders will need to schedule trips 24 to 48 hours in advance.

“Normally, we would do 14 days,” says Smith. “But we feel that this is a better option to protect the public and our staff as well.”

Buses also have new limitations sent down an executive order issued by Gov. Laura Kelly prohibiting more than 10 people on such vehicles at a time — including the driver.

Smith says additionally, they ask that riders not sit in the first two rows of the bus, maintain advised 6 feet distances and wash their hands frequently as recommended by health officials. Those with coughs, she asks to stay home and not ride the bus.

The organization is also stepping up its cleaning procedures. Smith says they increased their daily regimen starting two weeks ago.

“We normally throughout the flu season, regularly fog the buses with a disinfectant fog,” says Smith. “But we started doing daily disinfectant cleanings — and that includes our building as well.”

Smith also says they are implementing another layer of cleaning and disinfecting every Sunday.

“We have a company that’s coming in every week and they’re doing an electrostatic disinfectant for every bus as well.”

Smith further asks that those who need to contact them do so via phone or email. More information on routes can be found online at http://rileycountyks.gov/ata — or you can call (785) 537-6345 and press 3 for the dispatch supervisor.