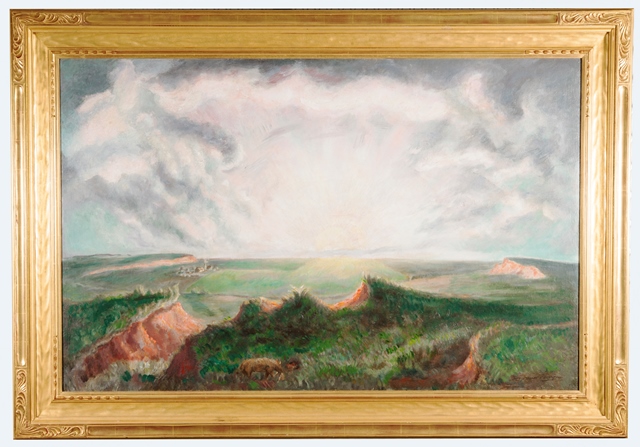 The exhibit includes a virtual exhibit open to the public now, as well as an in-person exhibit when the museum officially reopens on August 24th. It includes several of Curry’s paintings, prints, drawings, and book illustrations.

Beach Museum curator Liz Seaton spoke about the timing of the exhibit given the status of the pandemic.

The Beach Museum is home to more than 900 works by Curry, who was born in 1897 and grew up on a farm in Jefferson County, Kansas. His love for Kansas continued even after he moved out of state. He died in Wisconsin in 1946.

Seaton explains the importance of Kansas to Curry, which she says shows in his works.

The centerpiece of the exhibit is Curry’s Sunrise over Kansas painting. Seaton says Curry experimented in the 1930s with mixing natural resins and oil-based materials which causes some distracting discoloration of the sun over time. It hasn’t been on display for many years as a result. Only recently was it restored by art conservator Kenneth Bé of the Gerald R. Ford Conservation Center in Omaha.

A before and after slider can be viewed in the virtual exhibit, which can be seen here: Marianna Kistler Beach Museum Curry exhibit.

Liz Seaton will be featured during In Focus at 9:45 a.m. Friday on News Radio KMAN.