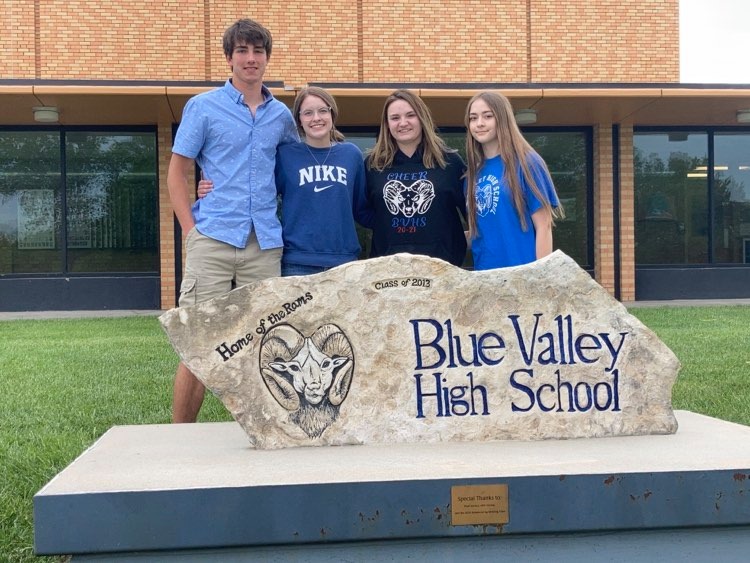 With just four students in this year’s graduating class, Jeremiah Duncan, Grace Johnson, Madison O’Shea and Shianne Shelton represent the high school’s smallest graduating class in its history. The four of them have been together since kindergarten, which at the time consisted of 11 students.

“For whatever reason over the years we never could fill their grade level with more students,” said Marion Mazouch, Blue Valley High School principal.

None of the four students seem to mind. In fact, they appreciate the close bond it has afforded them. Lone boy of the senior class, Jeremiah Duncan, says the small numbers just means stronger relationships.

While strength in numbers might not be relevant for them, Grace Johnson says they find strength in their bond with one another.

“It helps build a closer relationship, like, in bigger schools you probably wouldn’t know half of your classmates, but it’s nice to know everyone and form a good relationship,” Johnson adds.

Madison O’Shea, says those small numbers actually came in handy this year with the pandemic and being able to stay connected with each other.

“I think every class has been keeping up with each other. It’s pretty small here, so keeping connected with all the students is pretty easily done,” Madison tells KMAN.

In a school year with so many obstacles, it’s safe to say it’s not what they would have dreamed their senior year to be like. As they put it, this year was a big “if” and “when can we” moment. From a lack of connection due to wearing masks to having to quarantine during athletics seasons, Duncan, says the worst was just not being able to know.

Even with all the obstacles set in their way this school year, the four students are set to graduate May 15th. All four students tell KMAN that Blue Valley has been great from top to bottom, including the teachers. Shianne Shelton says the they seem like more than just a teacher.

“They actually do care and they want to make you better, and it’s not just because it’s what they get paid to do,” Shelton adds. “That really helps out the students and it brings in a connection between the student and the teacher that, I personally believe, helps with learning throughout the years.”

Duncan, agrees saying the teachers at Blue Valley are always willing to help.

“It’s a great experience at Blue Valley because of the small numbers, and you get the teachers that care about you and want you to do good, and they want this school to be a better place.”

The seniors are celebrating one final outing together before graduation, with their senior sneak at the Lake of the Ozarks this week.

Graduation is set for 1 p.m. May 15 at Blue Valley High School in Randolph.

Following graduation each senior has their sights set on their next adventure. Jeremiah plans to attend Emporia State, but has an undeclared major at this time. Madison will also head to Emporia State to major in Elementary Education. Shianne intends to continue her work as a CNA and strive towards getting her tattoo license. Finally, Grace will attend Cloud Community College with a major in dietetics.