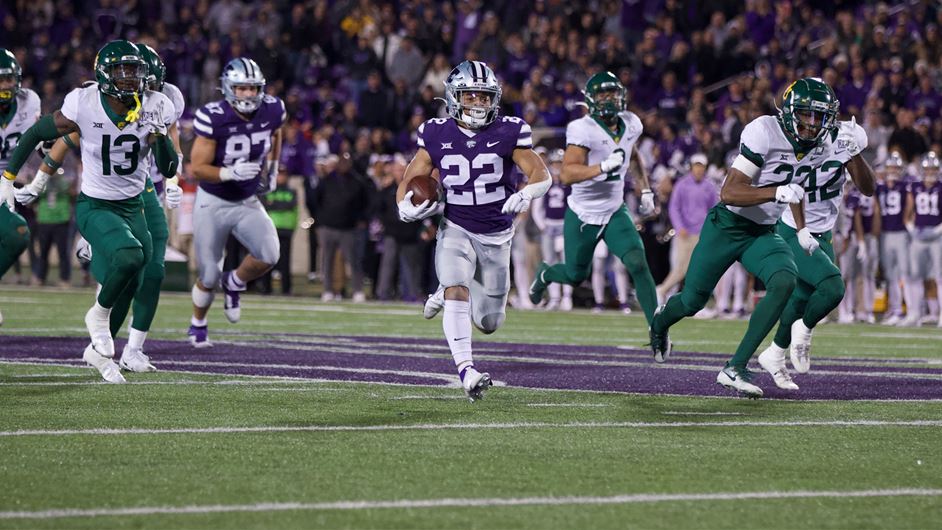 MANHATTAN, Kansas (D. Scott Fritchen / Kansas State Sports Information)– For more than a month, Kansas State was able to power, scrap and take control of its opponents during its four-game winning streak. Those times reached a disappointing end in a 20-10 loss against No. 11 Baylor on Senior Day at Bill Snyder Family Stadium.

K-State managed one touchdown and one field goal against a Baylor team that entered the contest carrying a reputation for holding down offenses. One week prior, the Bears held No. 4 Oklahoma to 14 points, its lowest total in a game since 2014. The Wildcats were hungry to send out 32 players with lasting memories of their final home game in Manhattan.

These weren’t the lasting memories they intended.

“We were sitting here 3-3 at one time not knowing what to expect. All the sudden, we run off four games in a row. We still have a good football team. We got beat by a better football team.”

As if the evening couldn’t have gotten worse, sixth-year senior quarterback Skylar Thompson in his final home game was helped to the sideline, then the injury tent, and then was carted to the locker room with 4 minutes, 4 seconds remaining in the fourth quarter after he appeared to grab his left calf following a shovel pass to Phillip Brooks in the middle of the field. Thompson has 7,952 total offensive yards, second most in school history.

Jaren Lewis entered the game and threw an interception. Baylor ran out the clock for its first road win since September 18.

Thompson completed 15 of 29 passes for 158 yards for the Wildcats, 7-4 overall and 4-4 in the Big 12 Conference, while an unsuspecting star in redshirt freshman quarterback Blake Shapen emerged for the Bears, 9-2 and 5-2, whose efforts under second-year head coach Dave Aranda has put this squad in the record books.

Just as Baylor did during 27-14 win over No. 4 Oklahoma last week, the Bears defense suffocated the Wildcats. Baylor outgained K-State 402-263, got to Thompson multiple times, and did about everything besides shutdown K-State sophomore running back Deuce Vaughn, who enjoyed his seventh 100-yard effort on the ground this season.

It wasn’t until Thompson threaded a pass to Malik Knowles for a 48-yard completion in the fourth quarter that the Wildcats were able to manufacture a long gain through the air. K-State trailed 20-10 at that point but got the fans into the contest. But even then, the Wildcats saw another promising scoring drive halted — this one resulting in a missed 39-yard field goal with 9:25 remaining in the game.

“Credit Baylor, they did a really nice job of mixing some things up, and pressuring and playing some good, tight coverage,” Klieman said.

Neither team reached the end zone in the final two quarters, but Baylor held the football for 35:54 overall in the game and converted 3 of 5 times on fourth down.

“The biggest thing was our execution,” K-State linebacker Cody Fletcher said. “We played pretty good ball overall and got some three-and-outs on them, but hat’s off to them. They made played when we didn’t.”

The shining light for the Wildcats in a game shrouded in frustration came in Vaughn’s performance. Vaughn had 128 yards on 11 carries and 1 touchdown.

He eclipsed 1,000 rushing yards for the season on his third carry of the contest — a 6-yard scamper late in the first quarter. However, Baylor’s defense, which swarmed the Wildcats most of the first half, snuffed out another drive and forced a punt.

Vaughn led K-State with 5 catches for 37 yards but carried regrets off the field.

The biggest question for Baylor was how it would replace starting quarterback Gerry Bohanon, who went down in the second quarter. However, Shapen came off the sideline and went 16 of 21 passing for 137 yards while finding a variety of targets and proved unflappable in the pocket. Trestan Ebner had 12 carries for 86 yards and 1 touchdown and added 7 catches for 27 yards. Abram Smith had 21 carries for 46 yards.

Baylor entered the game fourth in the FBS in averaging 237.5 rushing yards per game. K-State held the Bears to 189 rushing yards.

“They may have thrown the ball a little bit more (with Shapen), but we expected the same stuff,” said K-State safety Ross Elder, who had a career-high 10 tackles. “They were trying to establish that rush.”

Three scores between K-State and Baylor in the first half were aided by special teams snafus.

Baylor struck first from a K-State mistake, as Phillip Brooks muffed his first chance to return a punt in the game, and the Bears recovered at the K-State 25-yard line. Baylor running back Ebner scored on a 6-yard touchdown run for a 7-0 lead. It marked the 19th straight game that Baylor had forced a turnover.

“We got down on that miscue and got down early 7-0 and just couldn’t get out of that hole,” Klieman said. “We struggled to get any rhythm offensively until we had the run with Deuce. We struggled to get off the field on defense. Give them credit, they’re a team that goes for it a lot on fourth down, and we knew that, but we didn’t stop them significantly enough.

“We kept it within reach. We just didn’t capitalize on some of the opportunities we had.”

Baylor’s second score came off of another special teams mishap by the Wildcats. K-State long snapper Randen Plattner was penalized for kick-catch interference after Ebner mishandled a punt catch that the Wildcats recovered deep in Baylor territory. The Bears went on a 15-play, 74-yard drive in which they converted one fourth down and three third downs before Bohanon found Drake Dabney in the corner of the end zone for a 2-yard scoring strike.

Klieman said that the official “felt (Plattner) was too close to (Ebner)” and “it was a judgement call.”

Then it was K-State’s turn to take advantage of Baylor’s troubles on special teams.

K-State faced fourth-and-5 at its own 30-yard line when Jacoby Clark was penalized for being offsides on a punt. That gave the Wildcats a first down at the 35. On the very next play, Vaughn burst through the middle of the line, outran a trio of defenders, and raced down the right sideline 65 yards, diving past the front pylon and into the end zone with 2:51 left in the second quarter.

“It’s easy to block for Deuce,” K-State sixth-year senior center Noah Johnson said. “He makes our lives a lot easier. I know that guy isn’t driven by stats or by individual accolades. He wants to win. I’m proud of him.”

Shortly after K-State cut it to 14-7, Baylor appeared to suffer a major blow when Bohanon grabbed his right hamstring as he fell to the ground on the Bears’ sideline after a third-down run.

Shapen, a 6-foot, 195-pounder who had appeared in three games and had attempted just three passes all season, entered the game — and didn’t miss a beat. He completed three passes of 10-plus yards while taking the Bears to the 2-yard line in the final seconds of the second quarter. Isaiah Hankins drilled a 23-yard field goal as time expired on the first half for a 17-7 advantage.

“(Shapen) did a really nice job,” Klieman said. “We didn’t have much on a scouting report on him. He didn’t play, I believe, and we didn’t know what they were going to do from a run game and pass game. They did a nice job of throwing some checkdowns and easy completions for him to get into a rhythm and he’s a really good athlete and got us on a couple run plays. Obviously, Bohanan is their guy and a really good player, but I thought he gave them a spark and did some good things.”

Unfortunately for the Wildcats, mounting a comeback proved to be an insurmountable task over the final two quarters. They now prepare to visit Texas, 4-7 and 2-6, on Friday in Austin, Texas.

“Everyone on this team is a grown man and we know what just happened and what we need to do to get better,” Johnson said. “We just have to go do it. You don’t play football to cakewalk everyone. You play football for this, for high-stake games against really good teams. The highs are really awesome, and the lows really stink.

“The hard times, that’s when you grow and learn the most.”