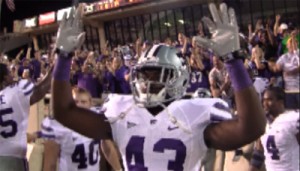 It was a wild game in Lubbock, but the Cats came through with their first win at Texas Tech since 1997 with a 41-34 victory to move to 6-0 on the season.  Despite giving up almost 400 yards and 28 points in the first half the Cats find a way to win behind 2 blocked FGs, a huge kick off return for a TD, and a renewed defensive effort in the second half to hold the potent Tech offense out of the end zone in the final 2 quarters.  Collin Klein again led the offense punching in 3 TDs on the ground and a 2nd half TD pass to Chris Harper in the 2nd half.  It was a great game for the Cats to remain undefeated with a showdown against rival Kansas coming next weekend.  Highlights and interviews with Coach Snyder, Raphael Guidry, Nigel Malone, Collin Klein, Tre Walker, and Arthur Brown plus anyalysis from the staff of Powercat Gameday are all part of our video wrap up from Lubbock.