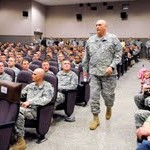 As the clock winds down on America’s longest period of armed conflict, Army senior leaders are busy framing a future force designed to thrive in a changing global environment. This new force will be agile and adaptable and “will be asked to do more” to ensure the nation’s security, the Army’s senior officer said May 14 during a visit to Fort Riley.

“Throughout time, our Army has been given one major mission, and that is to win our nation’s wars,” said 38th Army Chief of Staff Gen. Ray Odierno. “We are not going to walk away from that … but we have to do more. We have to be able to shape other areas around the world to prevent conflict, so we don’t have to go to war.”

During several engagements with 1st Infantry Division Soldiers and Family members, the general described the force of the future as “globally responsive and regionally engaged,” meaning that units will have the ability to deploy specially tailored units anywhere in the world on short notice to meet whatever the need might be.

Those needs, Odierno said, will not necessarily involve a combat situation.  Going forward, units will be “regionally engaged” and deployed to train and build partnerships, with the ultimate goal of providing countries within their region the tools they need to secure themselves and bring stability to what the general called, “the most uncertain security environment he has seen in his 37-year Army career.”

The globally responsive, regionally engaged concept is already being put into practice within the “Big Red One,” with the 2nd Armored Brigade Combat Team, the Army’s first Regionally Aligned Force. Since the “Dagger” Brigade was aligned with U.S. Army Africa in late spring this year, Soldiers have deployed to countries throughout Africa to train partner security forces on everything from logistics to noncommissioned officer education.

“This is the kind of work we will see during the next few years,” Odierno said. The force of the future was not the only topic discussed during the general’s visit to the Flint Hills post. The Army’s continuing budget challenges were a constant hot topic, and Odierno acknowledged the fiscal shortfalls created by things like sequestration and a higher-than-expected cost for operations in Afghanistan are still creating an environment of fiscal constraint. The general repeatedly assured his audiences Army senior leaders have been working the issues every day.

“Let me worry (about the budget),” he said. “I just need you to stay focused on what you do to train, to sustain your equipment, to develop leaders, to take care of our Families. Do the best you can with the resources we give you.”  Fort Riley and 1st Inf. Div. Soldiers, Family members, veterans and civilian employees all had the opportunity to present their own questions and concerns to the general during an hour-long town hall meeting.

The open discussion ranged in topic from women in combat and transition issues to toxic leadership and the future of the Army’s Tuition Assistance Program.     As he provided his insight into each of the widely varying subjects, Odiero emphasized the Army’s continuing commitment to Soldiers, Family members and Department of the Army civilians.

“We will continue to focus on making sure our Soldiers are equipped and protected, that they have the (information technology) capabilities to get the most current information as fast as possible and that they have the mobility to move around the battlefield,” the general said of modernization priorities.

One 1st Inf. Div. chaplain deviated slightly from the town hall’s policy and program questions when he asked the general what gets him out of bed in the morning. Without hesitation, the general said the reason he has stayed in the Army for 37 years is the great people he gets to deal with every day.

“I have gotten to witness amazing things in my career, amazing accomplishments, incredible courage, incredible talent, incredible camaraderie, that I will never forget, and that is what gets me up every day,” Odierno said.  “It is about understanding the sacrifice of our Soldiers and our Families and doing all I can to ensure that we continue to honor that sacrifice. Yes, we have problems, and everything isn’t perfect, but we are going to work every day to make sure that we do the best for our Soldiers and Families and Department of the Army civilians.”