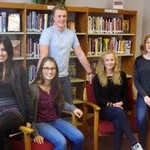 USD 320 had a clean audit. At Monday’s Board meeting, Agler & Gaeddert’s Tom Thomas went over elements of the 2012-13 audit report. He said all is as it should be with no violations. The audit reports attached management letter had a few suggestions that should be addressed before next year’ s audit, but nothing major.

In other business, the Board approved the resolution for the Capital Outlay tax levy for one year. The resolution authorizes an annual tax levy not to exceed 4 mills. The current resolution is due to expire in June of 2014, and requires public notification of the renewal. Board Member Richard Weixelman said passage of a new resolution doesn’t necessarily mean the district will draw on the funds, but need to have it in place in case the funds are needed. Supt. Denise O’Dea pointed out the option to authorize the Capital Outlay tax levy for up to a five year term, but the mill levy amount cannot be changed during that time. The board decided to go in one-year increments at this time.

Wamego has five foreign exchange students this school year. At Monday s USD 320 Board of Education meeting, Area Coordinator for Youth for Understanding (YFU) Beth Day, introduced the students to the Board. Each student showed pictures of their homeland, school and family. The countries represented are Brazil, Switzerland, Sweden, Denmark and Germany.

According to Day, Wamego provides one of the most amazing experiences for Foreign Exchange Students. The students are all active in either sports or the arts. Besides being the Area Coordinator for YFU, Day and her husband Bob have hosted a foreign exchange student for the past 18 years.

In other business, the board approved the travel requests for the High School band trip to Florida in December 2014, and the Spanish Clubs trip to Kansas City in March of 2014. The Band will perform at Disney World, and the Spanish Club will attend a show featuring Flamenco Dancers, which are part of a traveling group from Florida.