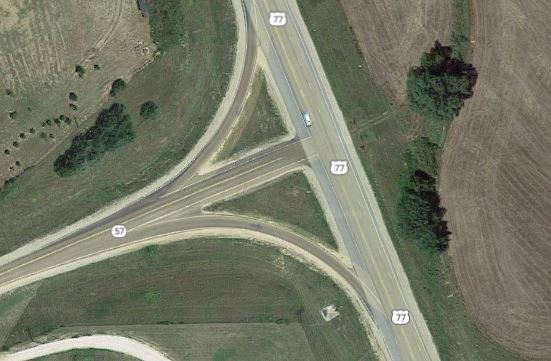 A dump truck overturned near the K-57/U.S. 77 interchange Wednesday according to the Kansas Highway Patrol. (Image courtesy Google Maps)

A dump truck overturned Wednesday afternoon in Geary County, according to the Kansas Highway Patrol.

The truck, which was pulling a trailer, was northbound on U.S. Highway 77 two miles west of Junction City. As it was approaching K-57, it lost air pressure going down a hill, which resulted in failed breaking.

The truck’s driver then merged into the right turn lane to avoid making a left turn. The driver could not negotiate the turn on to K-57 due to speed and overturned.

The driver, 56-year-old Jay Knitter of Morganville, was taken to the Geary County Hospital for treatment of his injuries.