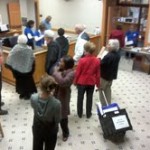 Several city and school elections are being held in the area, but probably the more notable and gaining the most attention is the Manhattan City Commission race, with seven candidates trying for three positions. KMAN news had packages on each of these individuals the past few weeks, but they include John Ball, Daniel Hogan, incumbent Rich Jankovich, Karen McCulloh, Debbie Nuss, Usha Reddi, and Bob Strawn.

Blue Valley Randolph’s USD 384 has one candidate for each of the three open seats.

Pottawatomie county voters have a lot to consider when they cast their ballots.

Other city council and mayor races with just enough or not enough candidates include Wheaton, Belvue, Havensville, Louisville, and Olsburg.

Wamego’s USD 320 has two people trying for each of the three positions to be filled. Rock Creek’s USD 323 has two candidates for two of the positions, five and six, but only one candidate for position four.

Polls close at seven this evening.