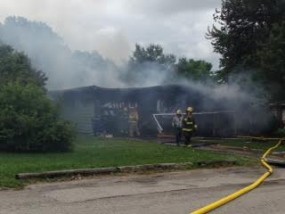 An apparent explosion at a house in the 200 block of North High Street in Riley touched off a fire shortly after 12:30 Saturday afternoon. Firefighters from multiple stations including Riley, Keats, Randolph and Leonardville responded to the scene as well as Riley County Police.

According to early reports it appears all occupants made it out of the house safely, however according to Riley County Fire Chief Pat Collins a woman and three children were transported to an area hospital for treatment but the extent of their injuries is unknown.

Collins has identified Amber Farnsworth as the occupant and Ed Doyle as the landlord.

KMAN will follow this story and we’ll have more details as they become available.