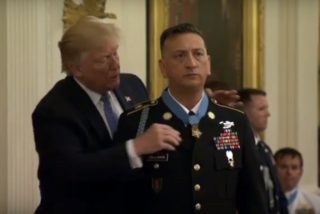 A former Fort Riley first division soldier received the Congressional Medal of Honor from the president on Tuesday.

Former Staff Sgt. David G. Bellavia received the medal of honor from President Donald Trump during a ceremony in Washington DC.  Bellavia served with the 1st Infantry Division in Iraq in 2004.  He is the first living recipient of the medal for the Iraq War.
His actions were he single handedly defeated a group of insurgents that opened fire on him and his squad in 2004 is what led to him receiving this honor.  He was able to make sure all of his men were safe.
Trump was thankful to Bellavia’s service as he recounted the events that led to him receiving the medal.
“America is blessed with the great people and heroes like Staff Sgt. Bellavia whose intrepid spirit and unwavering resolve defeats our enemies, protects our freedoms, and defends our great American Flag,” says Trump, “David we honor your extraordinary courage, your selfless service, and we thank you for carryinng on the legacy of american valor that has always made our nation the strongest in the world.”
Bellavia was joined by the servicemen he had served with on that night and throughout his career  He was also joined by eight other medal of honor recipients.
Share. Twitter Facebook Google+ Pinterest LinkedIn Tumblr Email