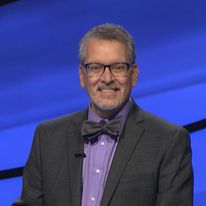 It is not every day that Manhattan can claim one of its own as the winner of a nationally televised game-show. But this very thing happened when Fred Nelson, a former Manhattan High School science teacher, became a Jeopardy champion in late 2020.

With the final episodes of Jeopardy featuring Alex Trebek as its host set to air next week, former Manhattan resident and Jeopardy champion Fred Nelson recently reflected with KMAN on his time on the show.

Nelson, who is currently a professor at California State University, Fresno, took part in the Dec. 3 and 4 episodes, bringing home about $21,000.

He says that from the time he got to the studio until when he left, the whole experience was a whirlwind.

“The show goes so quickly,” Nelson said. “Even the commercial breaks that we take during recording are only about a minute. It’s just enough to get a drink of water, re-powder your face and then pick up your clicker and get back into it.”

Even though Nelson won the first episode, the whirlwind did not stop there.

“If you win, which I was fortunate enough to do my first show, then it’s, ‘okay, run and change your clothes, go to the bathroom, get a drink of water, do your makeup again, get back here, we gotta put your microphone back on and your back on stage,” Nelson said. “There’s not even time to think about what you’ve gone through until the day is over.”

It wasn’t until afterward that he registered what had just happened.

“It’s like, I’m on the Jeopardy stage as the Jeopardy champion, that was Alex that was talking to me,” Nelson said. “You don’t even think about how much money you might have won until much later when they say, ‘we’ve got some paperwork for you to fill out and you’ll get your money somewhere in the next six months.'”

Nelson’s Jeopardy fandom may have only become apparent to the world within the last couple of months, but his interest in the show began at an early age.

Growing up on a farm near Smolan, KS, which is just southwest of Salina, Nelson would watch Jeopardy at a friends house. Even though the game show was in its early years at the time, Nelson knew it was unique.

“It wasn’t about being goofy or being silly, this was about knowing things and being curious,” Nelson said. “I thought, ‘wow, what a neat concept – it’s for people like me that like to read the encyclopedia for fun.”

Nelson would eventually move to Manhattan as an adult in 1988, attend Kansas State University and become a science teacher at Manhattan High school before eventually moving to Florida with his wife in 2006.

Looking back on his Jeopardy experience, Nelson says it was special to be able to say on the show that he is from Manhattan.

Although Trebek died from pancreatic cancer at 80-years old in early November, new episodes that were recorded several months ago featuring him as the host will continue airing through next week.