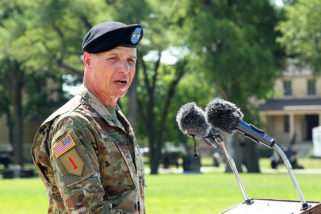 During Martins’ speech, he said he is a product of the Big Red One and will always proudly wear the number on his shoulder.

“I will always be a Big Red One soldier even as I go on to serve outside of America’s 1st Division,” said Martin, “It’s difficult for me to acknowledge those words and in many ways, my personal history is tied to this division.”
Martin said out of all the places he has served, nothing compares to the community at Fort Riley. He didn’t hesitate when asked what he’d miss most about the Big Red One.
“The soldiers,” he told KMAN. “The soldiers and the community. It’s really two things. The soldiers are fantastic, the facilities we have here to train, live, work, play, deploy from, return to are absolutely amazing. The community that surrounds it is extra special, so I’m going to miss the community here.”
Kolasheski thanked the multitude of people that have helped and supported him throughout his career. 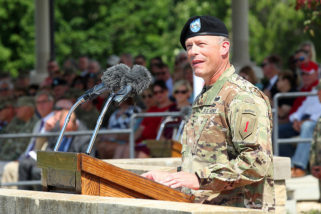 “I’m proud again to be a Big Red One soldier; brave, responsible and on point for nation.” said Kolasheski.
Kolasheski said taking over command is a humbling experience and is honored to come back.  He also added his family was brought to tears when they heard he was returning. Kolasheski was the deputy commanding general for maneuver of the 1st Infantry Division from June 2015 to May 2016. Before that, he’d deployed from Fort Riley twice from 2001 to 2005.
After the ceremony, Kolasheski said his first task as commanding general will be to try to continue to build on the legacy of Martin, preparing units, and integrate them into the community.

Martin, who served as commanding general since October 2016, will be heading to Washington D.C. to serve as the Director of the Army Staff.