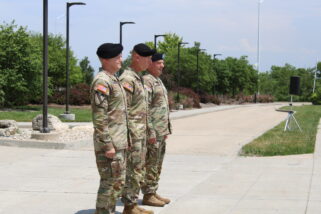 Fort Riley welcomed new senior staff to the 1st Infantry Division on Friday with a Victory with Honors ceremony.

Norman took over as the Deputy Commanding Officer of the Big Red One and Krattiger, who has been with the division for some time, took over at the Chief of Staff.

Sims says he had only worked with Krattiger for a short time, but knew of his reputation for years and was an easy choice for the position. Norman is new to the 1st Infantry Division, coming from Texas.

Norman thanked Sims for the opportunity to serve in this position for the Big Red One.

Krattiger also spoke during the ceremony, thanking a number of people for helping get to this position.

Sims says the division has gone through major changes over the past two months with numerous leadership position changes.