You are at:Home»Sports»Big 12 Sports»Grier and the Mountaineers Fly Past Kansas State 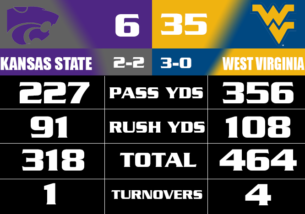 Morgantown, W. Va. – It was much of the same for Kansas State in their first conference matchup of the 2018 season, the defense constantly had their back against the wall due to an offense that was allergic to the endzone.

Will Grier continued his Heisman hopes with a five-touchdown performance that saw 356 yards through the air. Only two blemishes on the day, where two of his ten incomplete passes found the hands of K-State defenders for interceptions.

Early in the game Kansas State’s defense was holding West Virginia off, most of that can be attributed to the turnovers Kansas State was able to force. The Wildcats didn’t allow the first score of the game until just under five minutes left in the first quarter when Marcus Simms caught an 82-yard touchdown pass from Grier. It was a two play, 92-yard drive for the Mountaineers.

In the second quarter, Kansas State’s offensive woes continued which led to the Wildcat defense continuously being put in short field situations and Grier and the Mountaineers would continue to capitalize. David Sills V caught three touchdowns in the game and Tevin Bush added a 62-yard touchdown catch in-between the Sills scores.

K-State wouldn’t score until the third quarter when they finally moved the ball into West Virginia territory for the first time in the game and Blake Lynch converted on a 25-yard field goal to make things 21-3. That would be the closest the game remained in the afternoon as WVU would go grab two more touchdowns and the final scoring drive of the game would end with a 38-yard Lynch field goal for Kansas State.

Up Next: Kansas State returns home to take on the Texas Longhorns who picked up a home win against the 17th ranked TCU Horned Frogs on Saturday. West Virginia hits the road for an 11 a.m. kickoff at Jones AT&T Stadium to do battle with the Texas Tech Red Raiders. K-State and Texas will kickoff at 2:30 p.m. from Bill Snyder Family Stadium, with Powercat Gameday starting at 10:30 on KMAN and K-Rock.