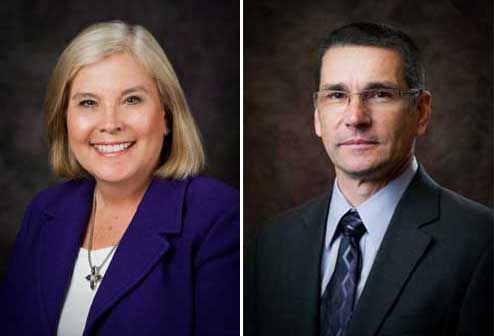 A pair of top Kansas State University administrators will retire early next year.

The university announced last week that Chief of Staff and Director of Community Relations Linda Cook will retire Jan. 31 following four years with K-State. Vice President for Communications and Marketing Jeff Morris will retire March 19 after a 12 year stint with the school.

Cook’s career has spanned 45 years in public affairs, communications and business planning. During her time with K-State, she’s overseen the Office of Institutional Equity, McCain Auditorium, the Beach Museum of Art and provided leadership for the Landon Lecture Series.

“It has been a pleasure to directly serve my alma mater in these positions over the past several years,” Cook said. “I’ve had a very fulfilling and successful career that started with a solid educational foundation and diploma from K-State in 1977. I look forward to continuing my support and participation with the university and K-State family as a loyal and active alumna.”

“It has been an honor to serve my family’s university and help support the land-grant mission of a world-class research institution,” Morris said. “I represent the third generation of my family to retire from K-State and deeply appreciate the opportunities provided by Presidents Kirk Schulz and Richard Myers. We’re ready to help the next generation take the lead.”

Both announced their retirements this month in order to allow time for a smooth transition following an anticipated hiring of a new university president in December.