The Vietnamese Student Association at Kansas State University held a Lunar New Year celebration at the Student Union on Saturday. 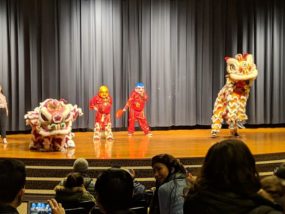 The event kicked off in Forum Hall with a presentation on the folklore that started the holiday known as Tết.  Afterwards a strange man entered on stage starting the traditional dragon lion dance.  The dancers danced on stage and then made their way through the audience leading them out into the Union Courtyard.

The dance continued into the courtyard, which was filled with food, drinks, and traditional Tet celebration paraphernalia.  This dance was followed up by another traditional dance used with hats.

VSA Treasurer Alia Whitaker said this event is a big potluck celebration that brings together families and communities to celebrate the new year.  This year marks the year of the boar.

“We actually started planning last semester when the school year started,” said Whitaker, “it usually takes all of the fall semester to plan.  After we finalize it we pick a day and celebrate it.” 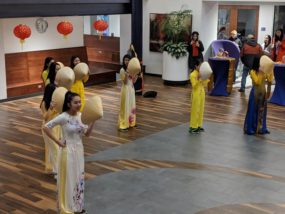 Vietnamese hat dance in the courtyard

Associate Professor Annilese Nyugen, who is also the adviser for the group, said the actual Lunar New Year was earlier in the month.  She said the reasoning for the delaying the celebration was to find a time when more people could join and for them to use the union.

“We started back in 2002 when we got official funding from the student union, but prior to that there wasn’t a university sponsor for the event.” said Nyugen,”It was a very informal gathering at the International Student Center.”

VSA Vice President Quan Tao said he was very happy with the turnout despite the nasty weather on Saturday. He was also thankful to the Union Program Council who helped them put on the event.

“We are doing this to introduce people to what the Lunar New Year is about and show off some of the traditional Vietnamese stuff,” said Tao.

Tao said they presented an outline to the UPC to help plan for the event.

UPC Multicultural Co-Chair Abby Sarvis said they were reached out to by the group to put on the event.  She said they really wanted to host this event because part of their goal for this year is to expand the idea of multicultural.