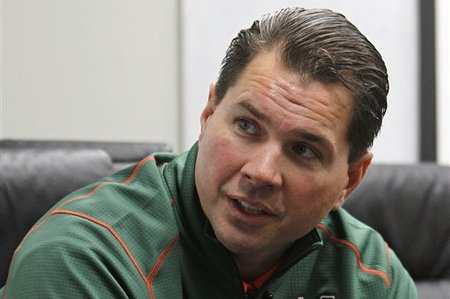 Convicted Ponzi scheme architect Nevin Shapiro has told Yahoo! Sports he provided impermissible benefits to dozens of University of Miami athletes, most of whom were involved with the football program.

Implicated in the report is K-State linebacker Arthur Brown and running back Bryce Brown.  The allegations come when Arthur Brown played two years at Miami before transferrring to K-State, and when Bryce Brown originally committed to Miami.  He later decommitted, signed with Tennessee, and eventually transferred to K-State.  Yahoo! Sports contacted K-State, but neither of the Brown brothers were made available for comment.

Shapiro says he gave money, cars, yacht trips, jewelry, televisions and other gifts between 2002 and 2010 to 72 total players at Miami, when he was a booster at the school. He claims he paid for nightclub outings, sex parties, restaurant meals and in one case, an abortion.  The funds for those gifts were revealed to be stolen, after Shapiro was convicted in a ponzi scheme.

Yahoo! Sports says it spent 100 hours interviewing Shapiro over the span of 11 months.  In June, Shapiro was sentenced to 20 years in prison after he admitted to securities fraud and money laundering. He was also ordered to pay more than $82 million in restitution to his victims.

The NCAA is investigating Shapiro’s role with the program.