You are at:Home»Local News»Lindstrom discusses issues with community during Manhattan campaign stop 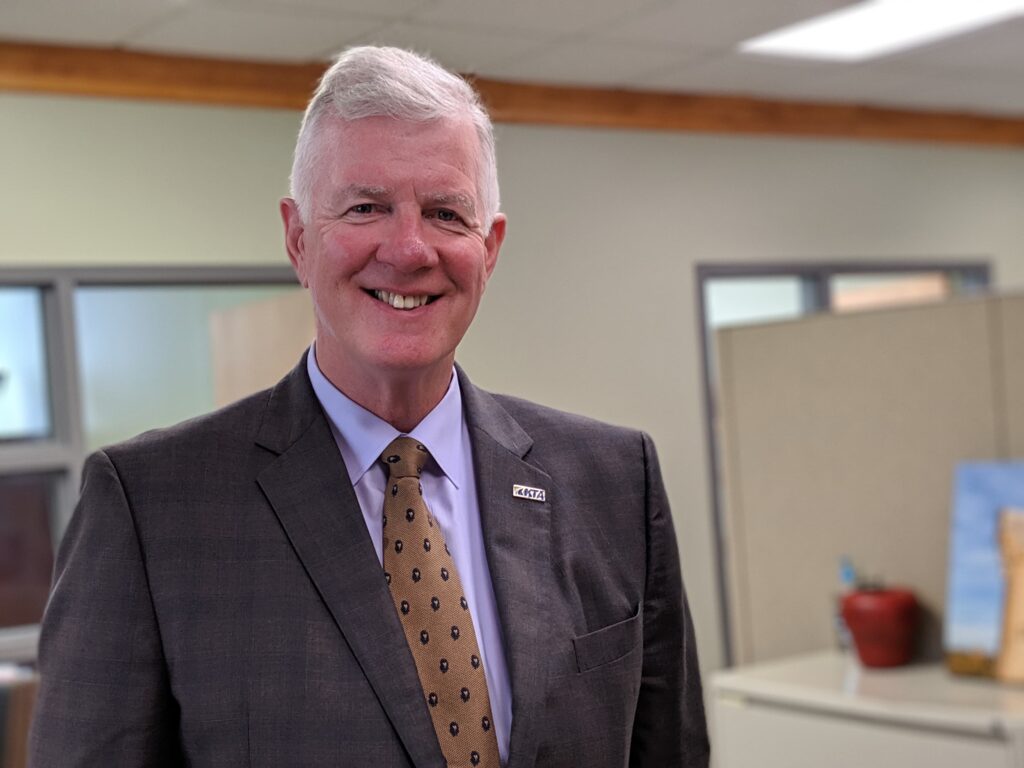 A Kansas Republican Senatorial candidate and retired Kansas City Chief made a stop by the Manhattan Area Chamber of Commerce offices to meet with community leaders and residents Wednesday morning.
Dave Lindstrom is the board chair of the Kansas Turnpike Authority and owned and operated multiple Burger King locations around the KC area. He says he was motivated to seek the candidacy in part because he feels the U.S. is under attack by socialist ideas by some in congress. Lindstrom was concerned with the lack of support by some politicians for increased border security, adding he supports President Trump in his plans.
“What we need to do is in some areas we need to build the wall, other areas maybe technology will handle it,” says Lindstrom. “Beyond that, we need to fund a budget that will pay for those things and put politics aside and defend our nation.”
Lindstrom says immigration reform is a necessity, noting labor around Kansas and the nation at-large in various industries.
“We want people to come into this country — we need to grow, we need bodies to help us fill some of the jobs we have vacant right now,” Lindstrom says. “But we are a country of laws and we need to make sure they’re coming in legally.”
He also mentioned a need to ensure that those entering the U.S. with children are actually related to them, possibly via DNA tests.
Another major motivators leading Lindstrom to seek Pat Roberts’ senate seat is the state of the country’s finances, noting the more than $1 trillion budget deficit. He says there’s an unwillingness in Washington D.C. to balance the budget, saying his track record and experience in business will be a plus.
“You analyze the data, see where the […] revenue is coming and where the expenditures are going out and you make decisions based on that,” he says. “I think we can do the same thing in government so long as we have people who are willing to make hard choices.”
Lindstrom also spoke on the issue of gun violence in the nation. He says as a supporter of the second amendment and an NRA member, he says he doesn’t think guns themselves create violence.
“But I do think that there are some things we can do — and the president is working on — as it relates to background checks,” says Lindstrom. He also says that facilitating better communication between various governmental agencies could be a step in the right direction.
Agriculture is a big focus for him as well, which Lindstrom says is why he announced his candidacy in Goodland back in July. He says his heart goes out to those affected by the Tyson plant fire in Holcomb, adding that it will have a ripple effect for other processing plants.
“It impacts the other [plants]and creates a backlog,” Lindstrom says. “It also creates a situation where it will impact the profitability of our ranchers and farmers in the state of Kansas.”
In regards to tariffs and their impacts on farmers and ranchers, he says he has heard from Kansas producers in his tours that they are supportive of President Trump’s policies so far.
“The reason they’re supportive of that is because they think right now the playing field is not level — they don’t want an advantage, they just want a level playing field,” he says. “But this needs to be a short-term pain and a long-term gain.”
Lindstrom says that it’s hard to understand how drug prices in Canada cost a fraction of the price in the U.S., saying it’s an area that the nation needs to improve in.
“We need to have a market-based healthcare program that allows us to have accessible and affordable care.”
Following on that, he says that healthcare for veterans need to be improved as well before taking care of non-citizens. Lindstrom also says that with the “inordinate” amount of rain in Kansas this year, whomever wins the election needs to make it a priority to ensure funding is available to protect the state against and mitigate flooding around the state.
Lindstrom is one of five GOP candidates vying for the nomination to run for Roberts’ seat, who is not seeking re-election. Other declared candidates are Kansas Senate President Susan Wagle, Kansas State Treasurer Jake LaTurner, former Secretary of State Kris Kobach and conservative commentator Bryan Pruitt. Declared Democratic candidates are former Kansas Representative Nancy Boyda, former U.S. Attorney for the District of Kansas Barry Grissom and former House candidate Robert Tillman.
Share. Twitter Facebook Google+ Pinterest LinkedIn Tumblr Email