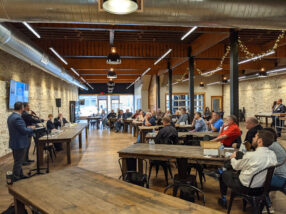 Residents from around the area gathered to hear the latest from their local legislators in Wamego.

Local state legislators met in Wamego to speak with the public on current bills and issues in the legislature.

One of the issues addressed was retaining and attracting businesses to Kansas. Senator O’Shea, who is part of the Commerce Committee, says the market is currently competitive with the surrounding states, so they are looking at what other states are doing that is innovative.

“So we have to make sure that we’re removing those barriers and what are we doing to be innovative in terms of our tools for training for potential tax credits and things like that to keep companies here to keep jobs here,” says O’Shea.

O’Shea says most of their efforts have been cleaning up current incentives by removing “hoops for companies to have to jump through.” Representative Francis Awerkamp says the state needs to fix its labor department first. He used the ongoing issues with the state unemployment system as an example.

“So last people I want in this state trying to promote business and economic development actively by taking somebody’s money and trying to give it to somebody else and chasing with a whack-a-mole methodology, is the government,” says Awerkamp.

Awerkamp voted against all incentive bills introduced.  He suggested the state modernize some of its infrastructure and work on customer support.

During a Q&A segment, Pottawatomie County Commissioner Dee McKee asked the legislators what they are doing at the state level against Dark Store Theory. Senator Longbine says the state constitutional amendment from 1986 says every property will be valued at fair market value.

“So the problem comes in is how do you determine fair market value. Well, on a 1,200 square foot house and a residential neighborhood that there’s 25 comps that have been sold similar to that, so that’s pretty easy,” says Longbine. “It’s not so easy on a one of a kind commercial or one of a kind of industrial property and so the state often helps with those.”

Longbine says the three counties being affected by Dark Store Theory mixed up a combination of rental income and profits of what was in the business for their appraisal models. This means the counties are charging income tax based on the better selling retailers.

“So I understand that it’s a big problem when you lose at State Board of Tax Appeals, they have now lost at the state court of appeals level.  I believe they will lose again if they go to the State Supreme Court because there is no basis under the law for them to use the appraisal method that they’ve been using,” says Longbine.

Longbine says there is an argument to be made that those properties using the Dark Store Theory have been over valued for a number of years.

Another issue brought up by Pottawatomie County Commissioner Pat Weixelman, dealt with Senate Bill 13 in which local governments will have to notify the public and hold a public hearing if they exceed revenue neutral rate for property tax.  Representative Highland says when they spoke to voters, this is something that they asked for.

“They have been giving us fits for years, last year especially so that’s the reason this bill came about.  So taxpayers want to know where their money is going and how much is going to each.  It’s a transparency bill,” says Highland.

All of the costs associated with the notification process would be paid out of pocket by each government entity. Riley County Clerk Rich Vargo earlier this year said this could cost the county around $30,000. Representative Awerkamp says he understands the spirit of the bill, but ultimately does not support it.  Awerkamp serves on his local city council where he has experienced the local budget process.

“I argued against it in committee, I attempted several amendments, and I was one of three people who voted against it.  The timeline is impossible and it’s an added burden cost wise to the counties,” says Awerkamp.

Awerkamp says to him, all the bill does is get rid of the tax lid on local governments.

Legislators will reconvene in Topeka on May 3rd.