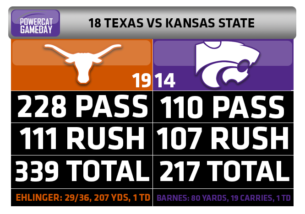 Manhattan, Kan. – It was a true tale of two halves in Bill Snyder Family Stadium on Saturday and depending on which one was viewed, different people could think that one team was the 18th ranked team in the country.

Texas came out of the gates early against the Wildcats of Kansas State, after punting on their first possession, K-State took the ball back from the Longhorns only to send a punt of their own away. D’Shawn Jamison of Texas fielded the punt at the 10 yard line and shot out of the gates and zoomed towards the endzone for the Longhorns first score of the game. The Longhorns would proceed to score on their next two possessions, getting a touchdown pass from Sam Ehlinger and then a field goal by Cameron Dicker to make things 19-0. Their defense was also able to force a sack of Alex Delton in the endzone for a safety during the scoring run in the first half.

Delton did make his first start of the 2018 campaign he only attempted seven passes, completing three of them for 14 yards. He ran for 27 yards, but his showing in the first half wasn’t enough to keep him out on the field and Skylar Thompson entered the game for the first time. Thompson led the first drive of the second half down the field for 82 yards and a touchdown to put the Cats behind only 12.

Kansas State continued to fight, forcing stalled drives by Texas around midfield on multiple occasions. After a punt on their drive to follow up the touchdown, K-State went back out for their third possession of the 2nd half and the drive started to look shaky at times. Moving the ball, Thompson appeared to have found a wide open Dalton Schoen who dropped the pass and K-State had to start from square one. Schoen would go onto redeem himself with three big grabs on the rest of the drive all setting up an Alex Barnes one yard touchdown dive over the line.

Texas hadn’t held the ball for more than five and a half minutes all day, until their final drive of the game when they were able to convert on a crucial 3rd and 11 and run out the final 6:20 of the game.

Up Next: Kansas State heads to Waco, Texas for a matchup with Matt Ruhle and the Baylor Bears. Baylor battled and hung with 6th ranked Oklahoma for the better part of three quarters, but then Kyler Murray became too much for Baylor. K-State and Baylor will kickoff at 2:30, making it the fourth consecutive mid-afternoon start for Kansas State. Baylor is 1-1 in Big 12 play after a win at home in their first matchup with Kansas and K-State is 0-2 after losses at West Virginia and versus Texas. Powercat Gameday will start at 10:30 on 101.5 KRock and 1350 News Radio KMAN.