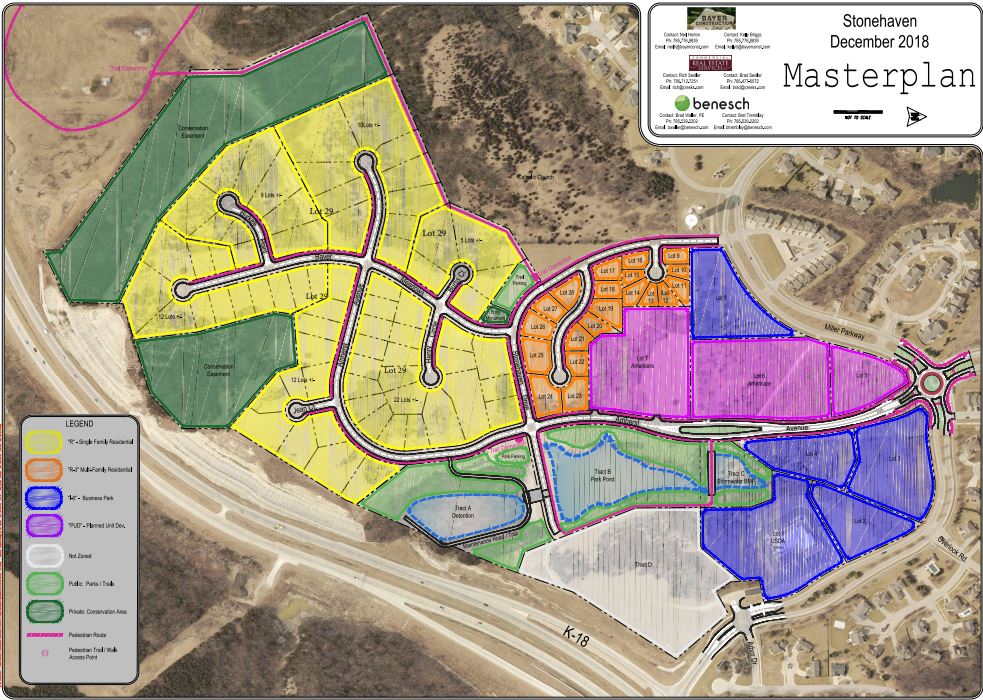 Stonehaven Addition, Unit 2 (courtesy of the City of Manhattan)

Eight new public infrastructure projects are on the horizon for the Stonehaven Addition, Unit 2 subdivision. The Manhattan City Commission unanimously approved petitions for the projects and to create benefit districts to divide up costs for them at its Tuesday meeting.

The projects include the extension of Amherst Avenue, a new roundabout at the intersection of Amherst and Miller Parkway, a detention dam and multiple waterline improvements. The cost to the city at large is estimated at $1.3 million for all projects, with the remainder of the total $5.7 million being assessed to benefiting property owners per their petition. The cost per lot will vary based on its square footage.

Neil Horton of BCC Development says he is happy they’ve gotten to this point and that Americare is anxious to get started on the construction of their planned senior living facility.

As part of the deal, Manhattan will also receive a donation of a portion of the subdivision with a pond for city parkland. As a result, the city will pay a total of $852,000 in special assessment taxes for their ownership in the area.

Commissioner Jerred McKee says he wasn’t a fan of that cost to the city. He says though he is favorable of this agreement, he says they should be cautious going forward.

“I don’t know if this scenario would have worked out the same way if we didn’t have special assessments and this was financed how most developments in other cities are financed and they came to us and said ‘we’ll sell you this piece of land for $800,000,” says McKee. “I don’t think that we would have done that.”

Commissioner Linda Morse says the plan was a natural fit and that she’s pleased they could reach a deal with the developer. Commissioner Wynn Butler also spoke favorably of the plan, saying it also helps them deal with some stormwater issues as well. 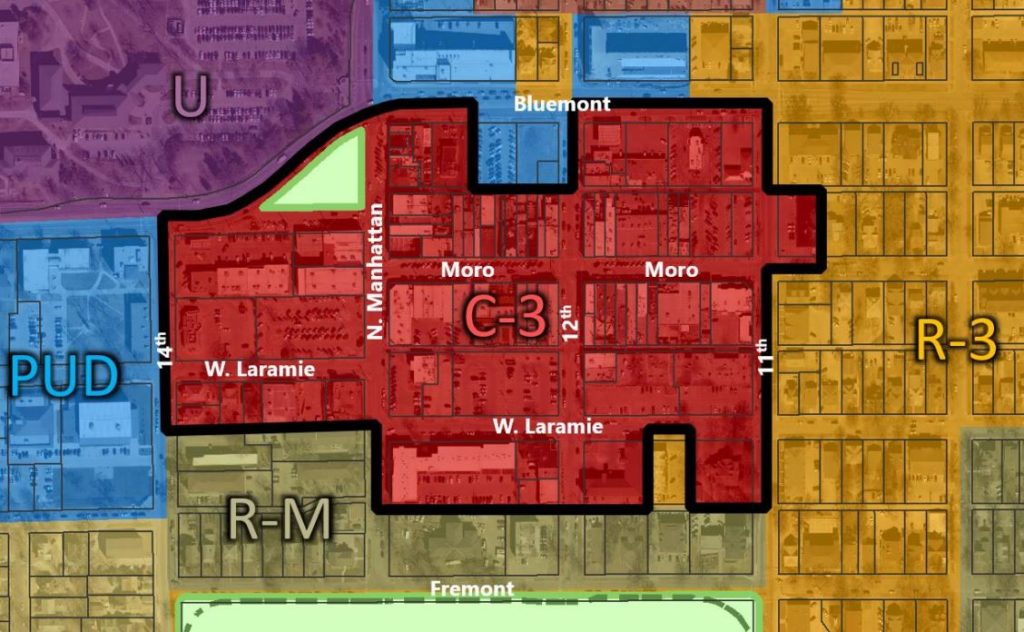 Aggieville’s zoning (courtesy of the City of Manhattan)

New zoning regulations will act as a stop-gap for new development in Aggieville until Manhattan approves its Unified Development Ordinance. The Manhattan City Commission unanimously voted to amend the district’s zoning regulations.
The new zoning allows parking garages as a permitted us, raises the max building height outside of the historic core area to 5 stories and a total of 65 feet and institutes a 3 story minimum outside of the historic core for new development, and reduces residential parking requirements to one spot per dwelling on new units. New zoning rules would also mandate that street-facing facades on new developments would have to be 70 percent brick or stone, or 50 percent if 50 percent of the facade is made up of windows.
Commissioners had to perform a “friendly” override of the Manhattan Urban Area Planning Board’s recommendation to allow for the 50 percent exception for buildings with large amounts of windows as well.
Many of the changes are planned to be included in the city’s zoning revamp, this ordinance just institutes them now so redevelopment abides by them while the UDO is still being developed.
Commissioner McKee says he would be in favor of reducing or eliminating residential parking requirements in Aggieville altogether.
“Some of the most innovative districts in the country have eliminated parking standards and mass chaos has not ensued, businesses have not closed, they found success in it,” McKee says. “It’s a progressive, forward way of thinking that many cities are taking on right now.”
Commissioners also discussed the reduction in minimum parking requirements. Planner Ben Chmiel says the latest data shows them that incoming renters are coming to Manhattan with fewer automobiles and that often regulations require more parking for tenants than is needed.
In light of that, Mayor Pro Tempore Usha Reddi raised concerns about the proposed parking garage next to Rally House and whether it would be utilized as envisioned. Community Development Director Eric Cattell says those are two different discussions as the parking garage is intended to help accommodate commercial traffic rather than residential occupants.
Aggieville Business Association President Ryan Bramhall said during public comment they’ve been studying the parking situation as well.
“But also when we’re looking at it, too, it’s not just people that live in Aggieville — it’s a destination,” says Bramhall. “We’re still a rural community so we have people on the weekends, during the week, that drive in to eat, shop. So that’s something we do need to consider.”
City staff hopes to have the UDO before commissioners for consideration this summer.
Manhattan-Ogden USD 383 building permit fees
The City of Manhattan unanimously voted to waive building permit fees for Manhattan Ogden USD 383 bond projects at its Tuesday meeting. Commissioner Wynn Butler asked that the item be moved from the consent agenda to be discussed on the general agenda.
The city and school district have struck similar deals after the most recent 2008 and 1993 school bonds. Total fees for the projects would amount between $275,000 to $300,000 dollars. Butler likened the waiver to a hidden tax added on to the bond, and asked if there would be any additional staffing needs to perform the extra workload. Assistant Chief of Risk Reduction and Code Services Brad Claussen says they don’t think that will be necessary.
“It does raise our inspection numbers in a given year during the peak of the construction,” says Claussen. “But we really feel strongly that it’s something that’s important and that our structures meet our local codes and that they’re inspected so that we can make sure of that.”
USD 383 Assistant Superintendent Eric Reid said during public comment that their partnership with the city has been important and they’ve returned the favor by waiving fees to the city as well.
“And everytime I do that along the way, I have to put in my Board [of Education]packet — I have a little statement on there that said this is to reciprocate the blessing that the city has been to us throughout the fee process in the last bond issue,” said Reid.
In the end, Butler says he was convinced.
Aggieville Americare government Kansas KMAN manhattan Manhattan City Commission Manhattan-Ogden USD 383 news radio Riley County school bond Stonehaven Addition Unit 2 USD 383 zoning
Share. Twitter Facebook Pinterest LinkedIn Tumblr Email