The Martin Luther King Jr. Community Celebration has been a mainstay in Manhattan for more than two decades, organized by the Manhattan Martin Luther Jr. Memorial Committee. The event regularly features poetry, singing, speeches, recognition for winners of the annual art and writing contest, and the presentation of the Spirit of Martin Luther King Community Service Award.

Mayor Usha Reddi opened the celebration, welcoming visitors and residents alike. She says the work of King and people like him gave her the opportunity not just to vote, but to serve as an elected official in the United States.

“There’s lots to do in the fields of education, health care, criminal justice and college education, voting,” says Reddi. “And it takes key people like yourselves to continue the work.”

Reddi further commented on the importance of involving youth in events like this, adding that the work of King needs to be continued every day and not just once a year in order to “make sure everybody has equal rights and equal privileges in every area in our community and in our society.”

Reddi’s remarks were followed by the opening prayer, delivered by Committee Secretary Rachel Shivers and the singing of “Lift Every Voice and Sing” as led by the Rev. Jonalu Johnstone of the Unitarian Universalist Fellowship of Manhattan. 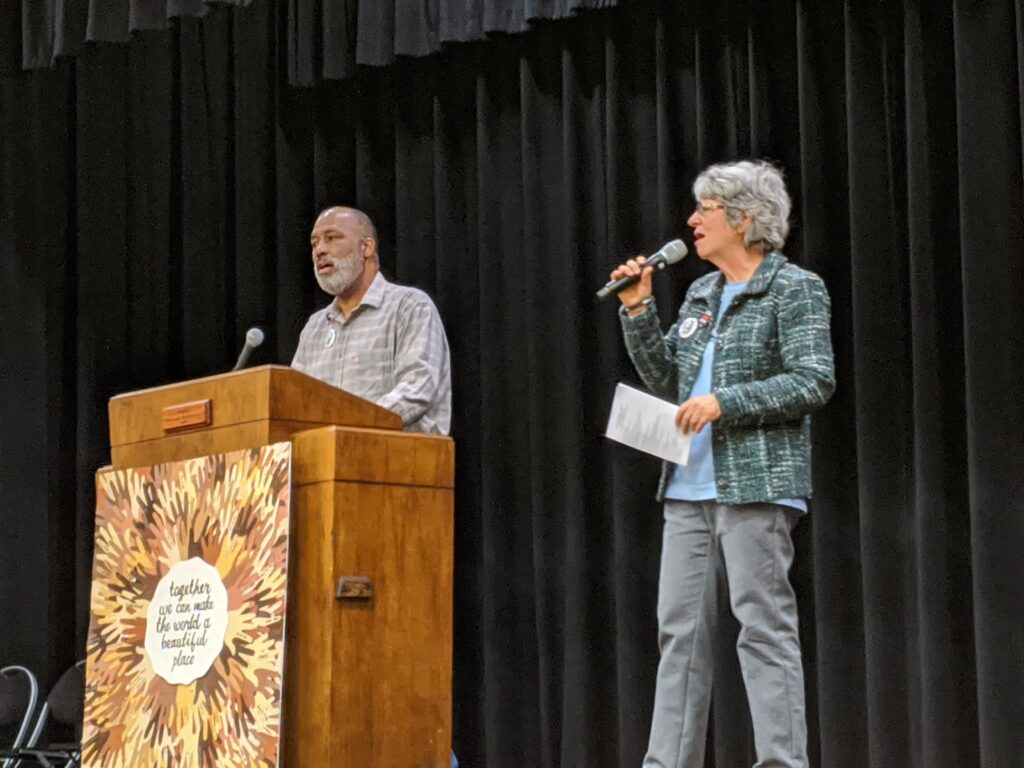 “It’s a song about moving out of a time of slavery, a time of Jim Crow, all of the things that had beset the African American community,” says Johnstone. “And into a future of hope.”

Lem Sheppard, musician, historian and member of the Humanities Kansas Speakers Bureau, spoke on the Harlem Renaissance’s Kansas connections. He dotted his historical commentary with poems from the likes of Langston Hughes, who was raised for part of his childhood in Lawrence, poet and journalist Frank Marshall Davis, born in Arkansas City, Kansas, and Eva Jessye, born in Coffeyville. He says educational opportunities for African Americans they couldn’t receive in other parts of the U.S. such as the South were part of the conditions that led folks to settle in Kansas in the late 1800s. As a result, African American communities were rife with creative ventures and literary clubs says Sheppard. 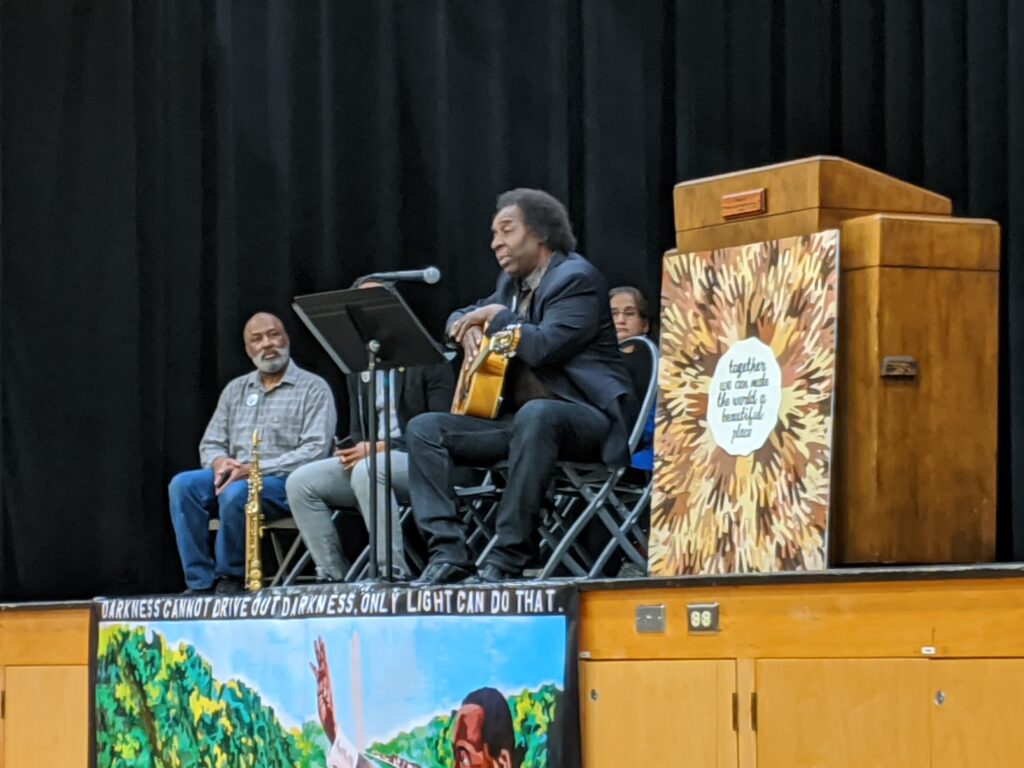 “Kansas […] was ahead of the time,” says Sheppard. “All the themes about the Harlem Renaissance, I found them in Kansas starting in 1870 — 25 years before.”

Following the “I Have A Dream” litany, Dave and Sonya Baker were announced as this year’s recipients of the Spirit of Martin Luther King Community Service Award. The award has been presented since 2006, and Dave and Sonya are the 24th and 25th recipients. To qualify, one must live in or be active in the community, show service or a long-term commitment to unite the diversity of the community for the greater good and have a track record of bringing people together in a non-polarizing manner. 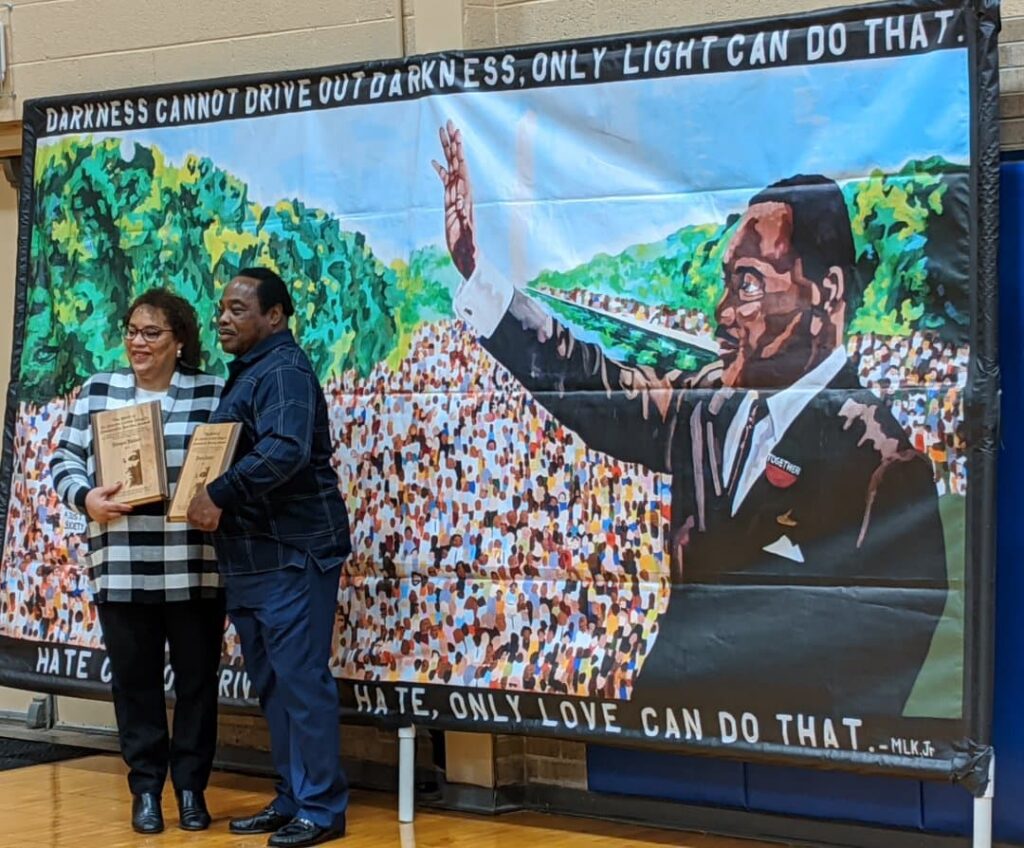 Dave, former Kansas State University head baseball coach from 1976 to 1984, was born and raised in Manhattan and moved back to the city in 2011.

“In his role as director of the Douglass Community Center,” says Committee Treasurer Debbie Nuss, “Dave has worked tirelessly to create an environment where everyone, from all walks of life, can find something to do.”

Nuss also commended Dave’s work in organizing Manhattan’s annual Juneteenth event, but said more recently the compliments belong to Sonya who served as the chair of the Juneteenth Committee. She says the position takes skill and tact that not everyone possesses.

“Being able to manage different personalities who often offer conflicting points of view, but yet being able to bring everyone to consensus in a way that everyone feels as if their voice has been heard and their viewpoint respected is not an easy task,” says Nuss. “And when one of those committee members is your spouse, that’s a credit to both Dave and Sonya.”

Sonya says at first, she was apprehensive about returning to Manhattan, but eventually came around. She thanked the committee for the recognition and in turn recognized the participants in the art and writing contest.

“They are truly making a difference because it took them time to think through what difference they are making,” says Sonya. “They probably don’t realize it now but maybe in years to come just like this has happened for me, this will happen for them.”

Dave spoke of King, saying he had a life tool box containing the will to sacrifice for a better future, adding that that sacrifice has made his life better as a result.

“So I would ask you today, what do you have in your life’s tool box?” Dave said. “What will you do for others?”

His words echoed the theme of the art and writing contest: “Life’s most important and urgent question is, ‘What are you doing for others?'” Winners are listed below: 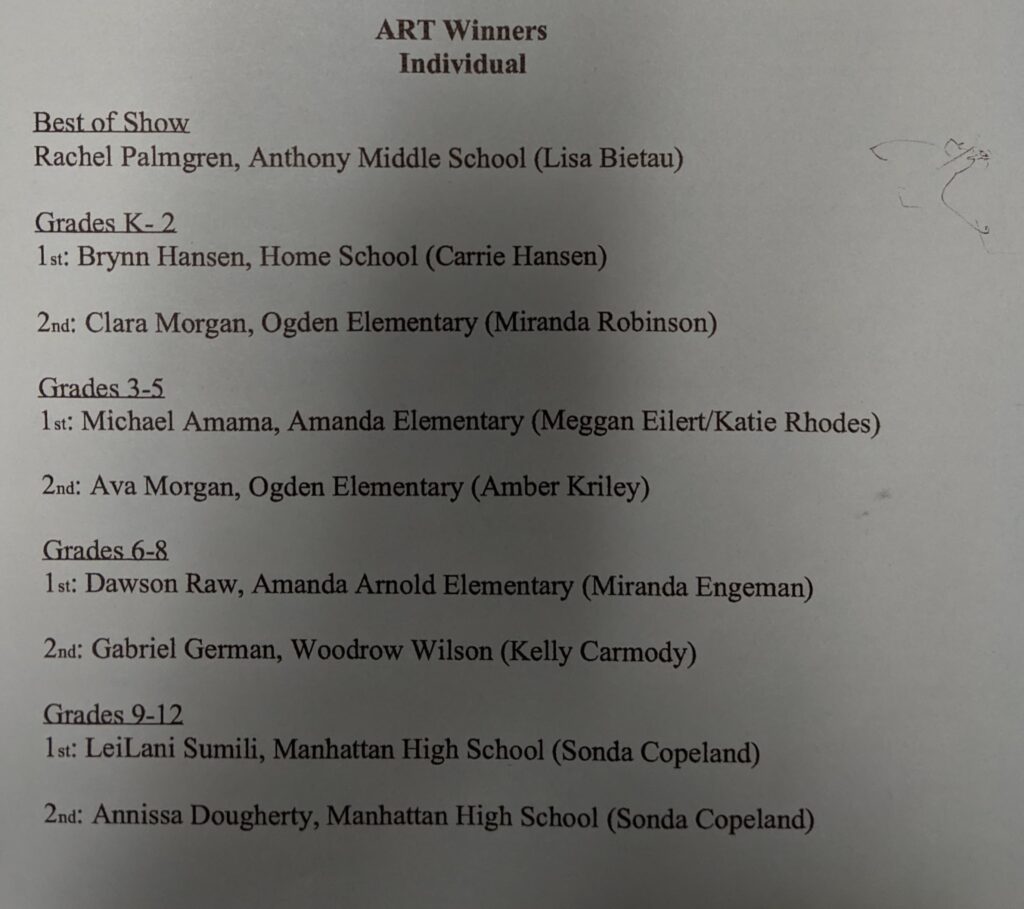 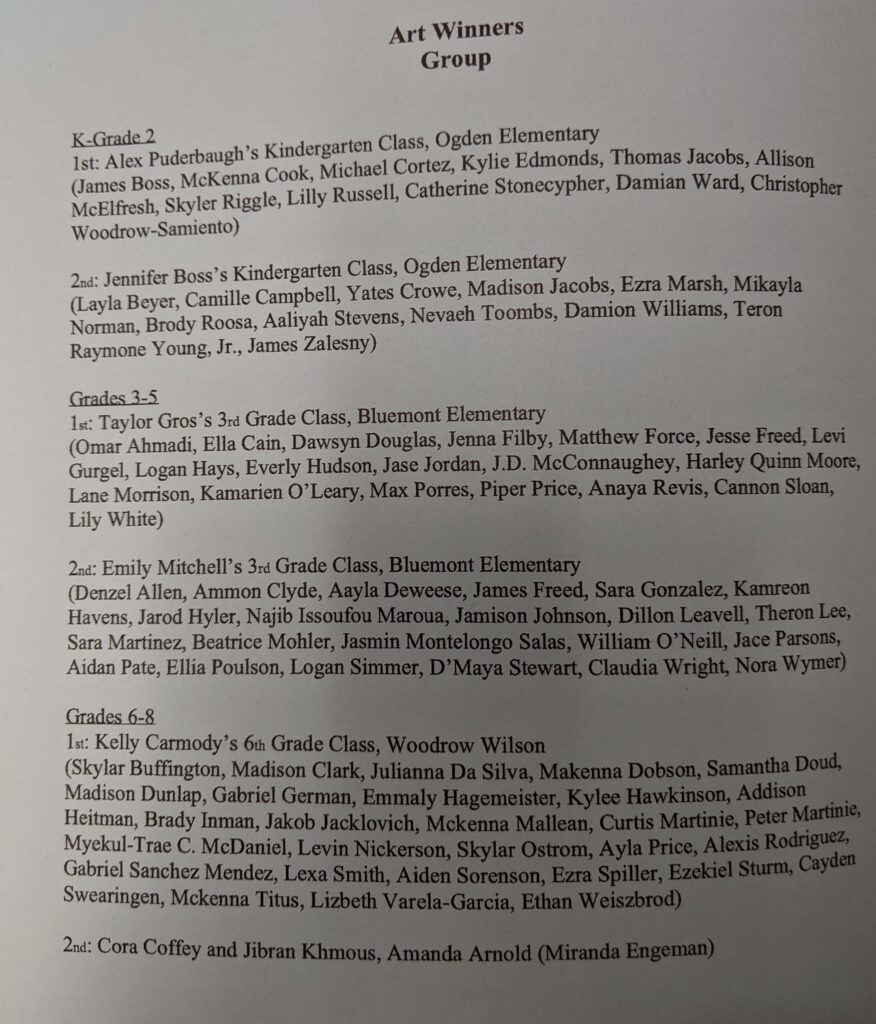 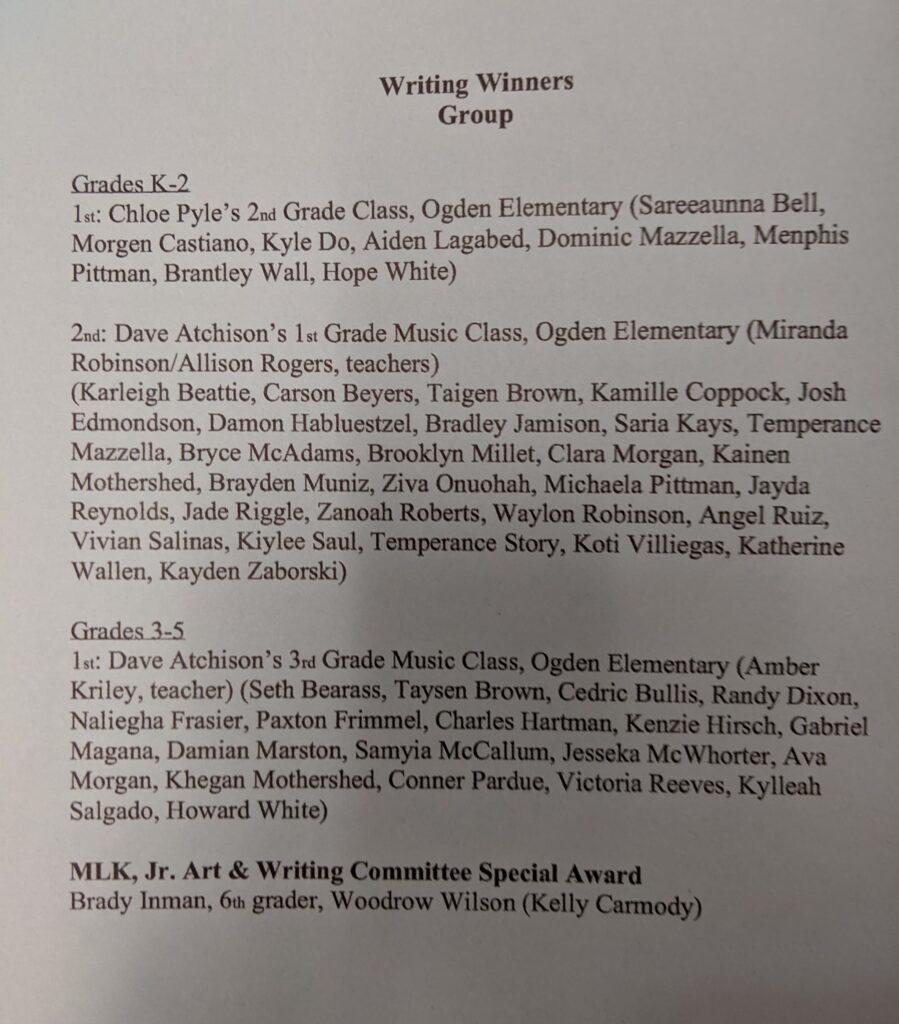 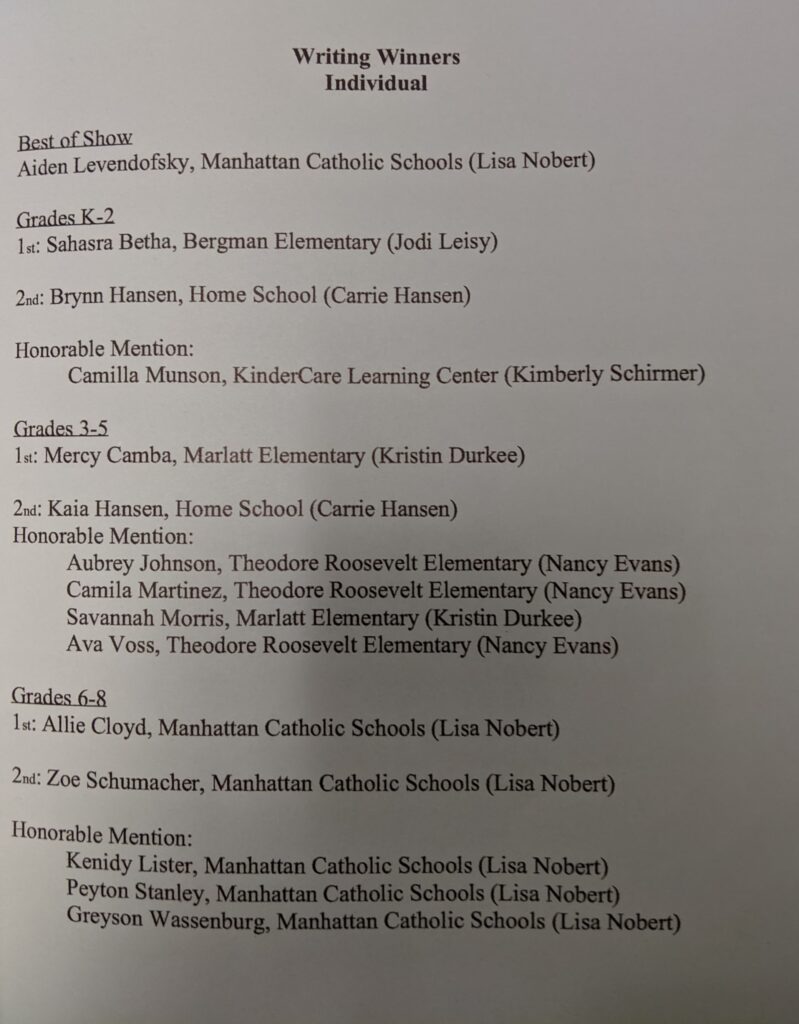 Allie Cloyd of Manhattan Catholic Schools recited the work her classmate Aiden Levendofsky, who was the recipient of the best of show award in the writing contest’s individual category. The work drew parallels between activists and civil rights leaders such as King, Nelson Mandela, Gandhi and Greta Thunberg.

“These people aren’t immaculate,” read Cloyd. “They do not possess a bravery that we cannot obtain or an integrity that we can never endure — rather, they took action. So, what are you doing for others?”

Mercy Camba from Marlatt Elementary received first place in the grades 3 through 5 category, encouraging people to respect one another regardless of the color of one’s skin and the importance of kindness. She says simple acts such as sharing a smile can make someone’s day.

“By making someone’s day, you make them proud and joyful — you also make them want to do something nice for someone else, too,” says Camba. “You can make so many people happy by starting a chain reaction of kindness.”

The celebration concluded after a performance Ogden Elementary music teacher Dave Atchison and the Ogden Elementary School Power Panther Club — a long-lasting component of the annual event. Those in attendance were also encouraged to sign a Martin Luther King Jr. quilt. 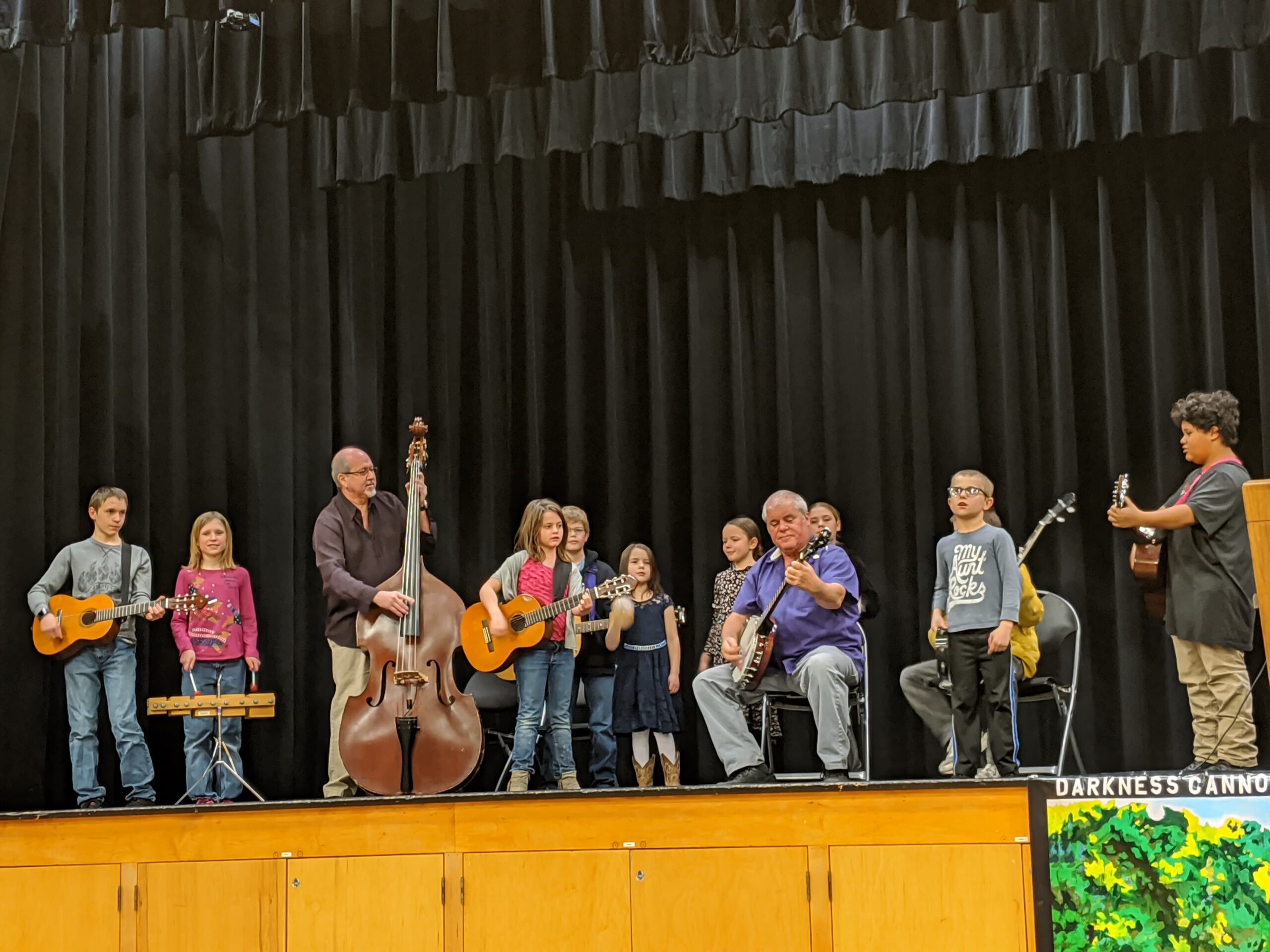 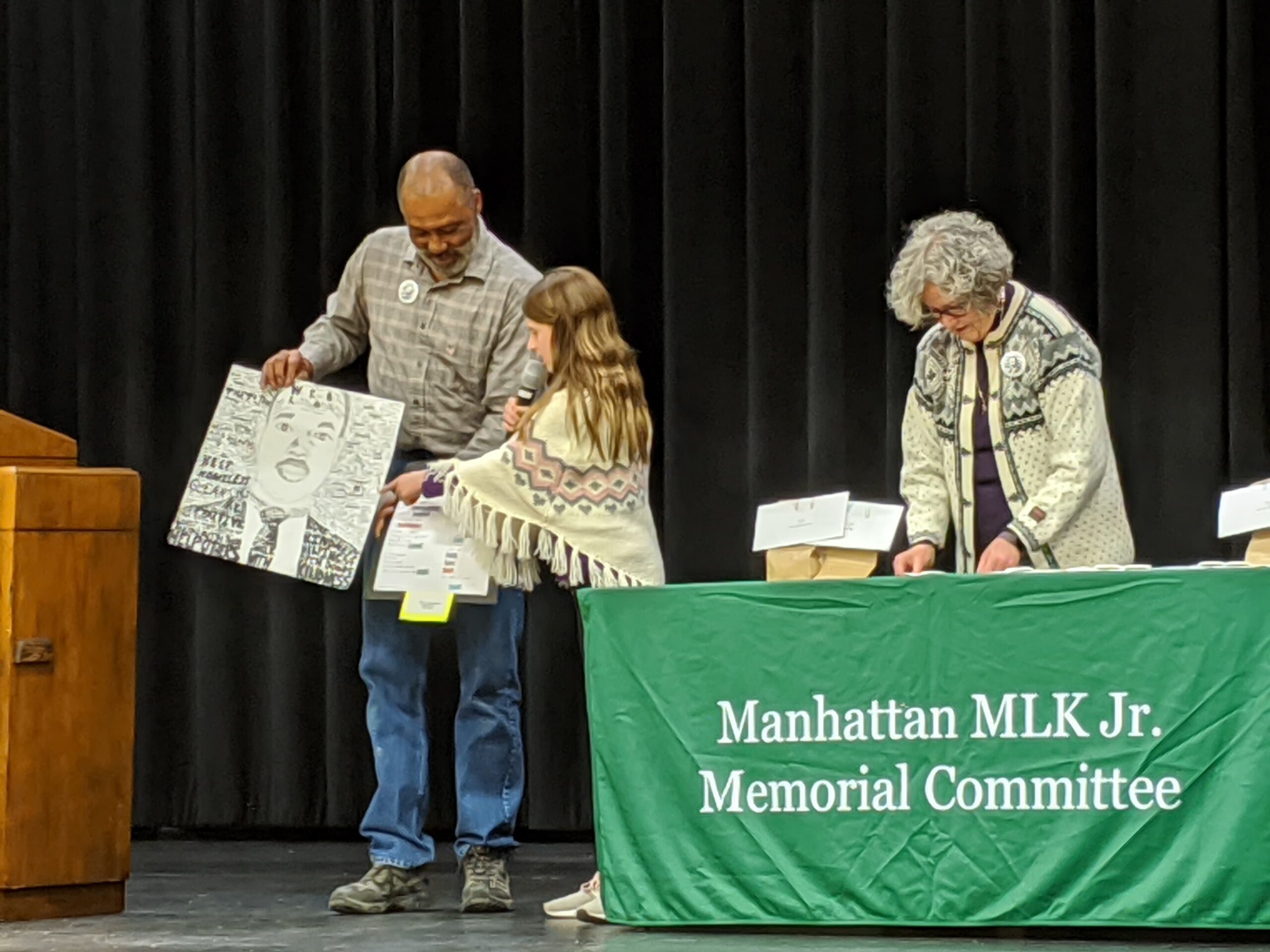 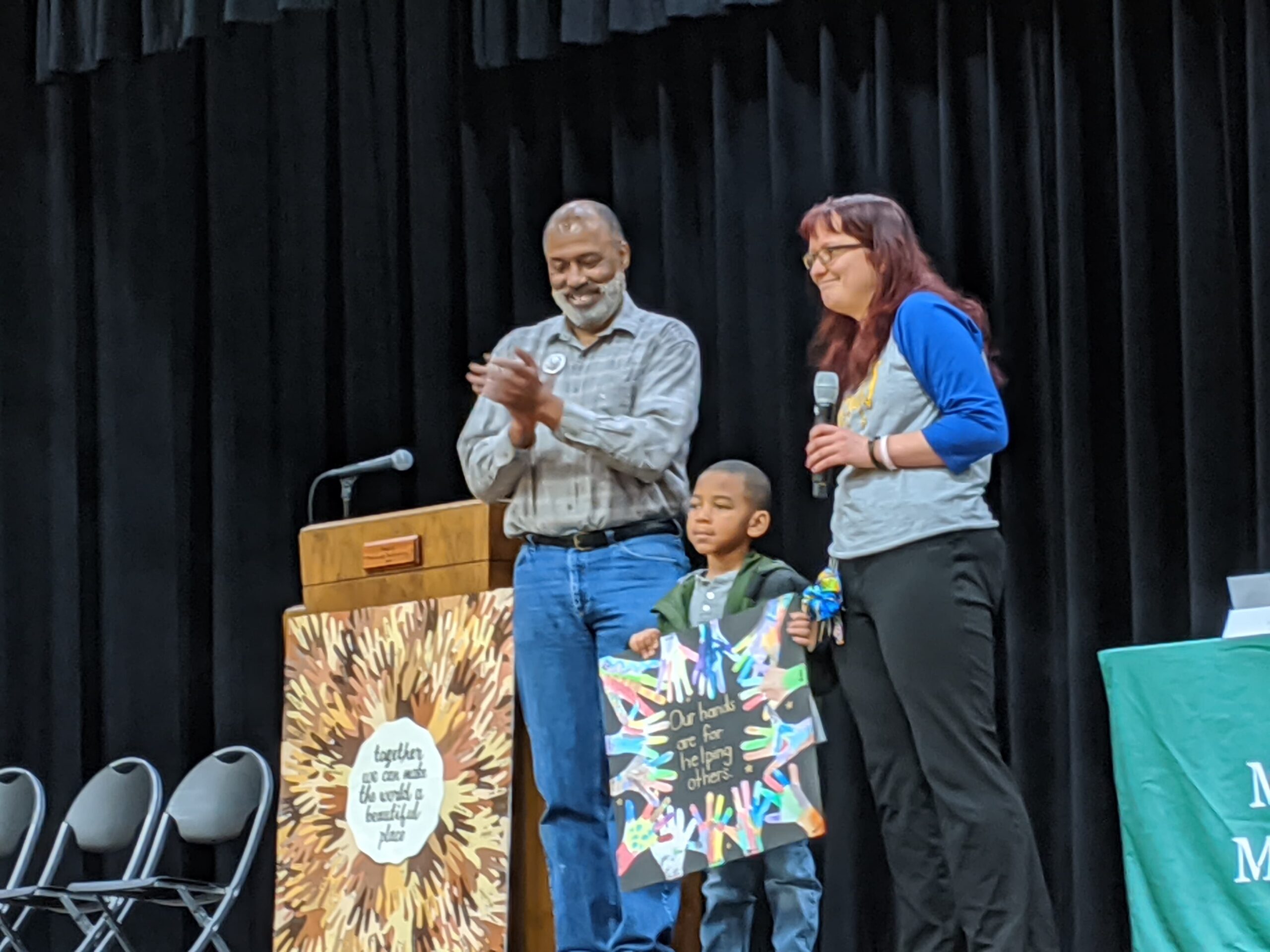 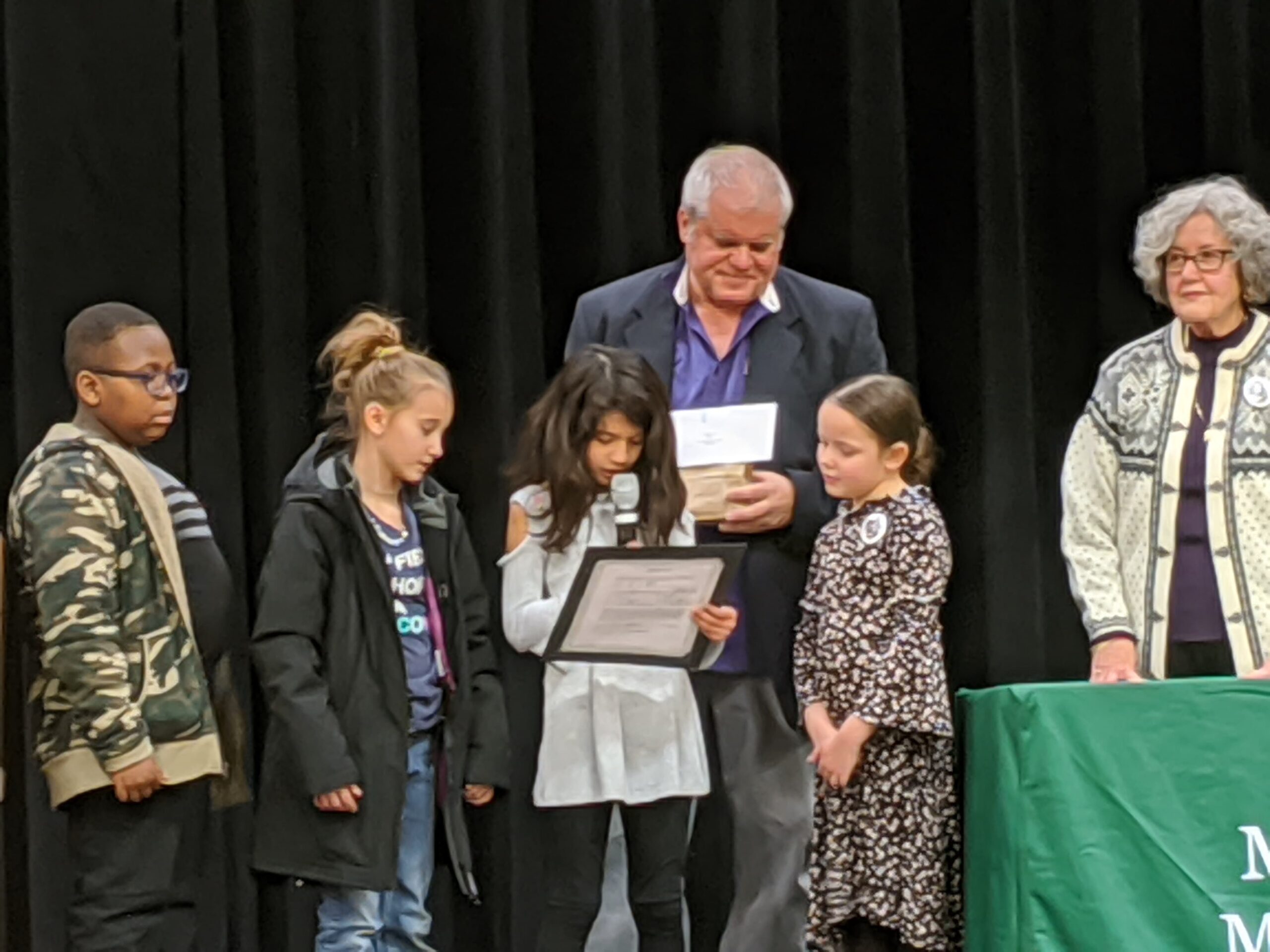 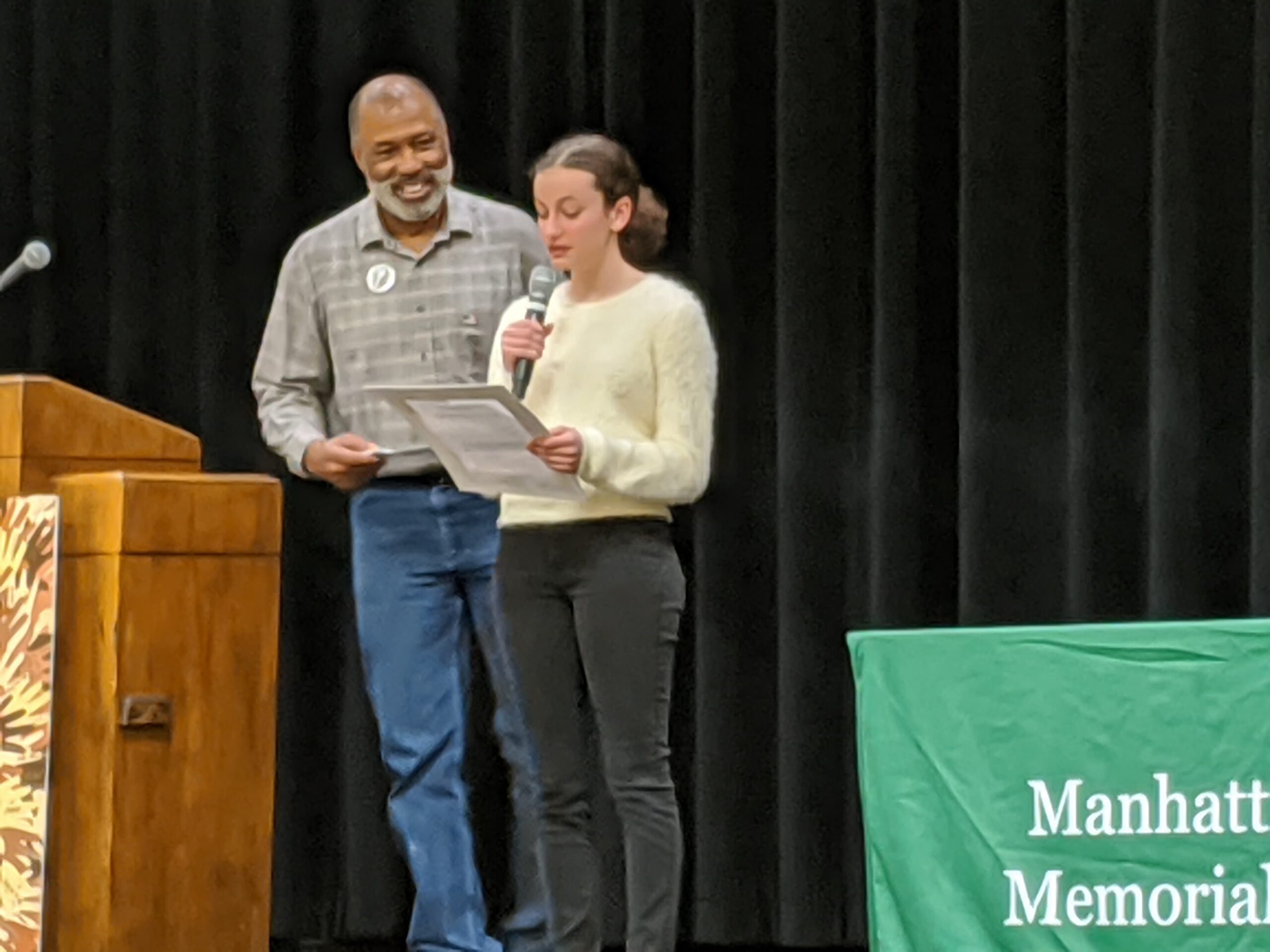 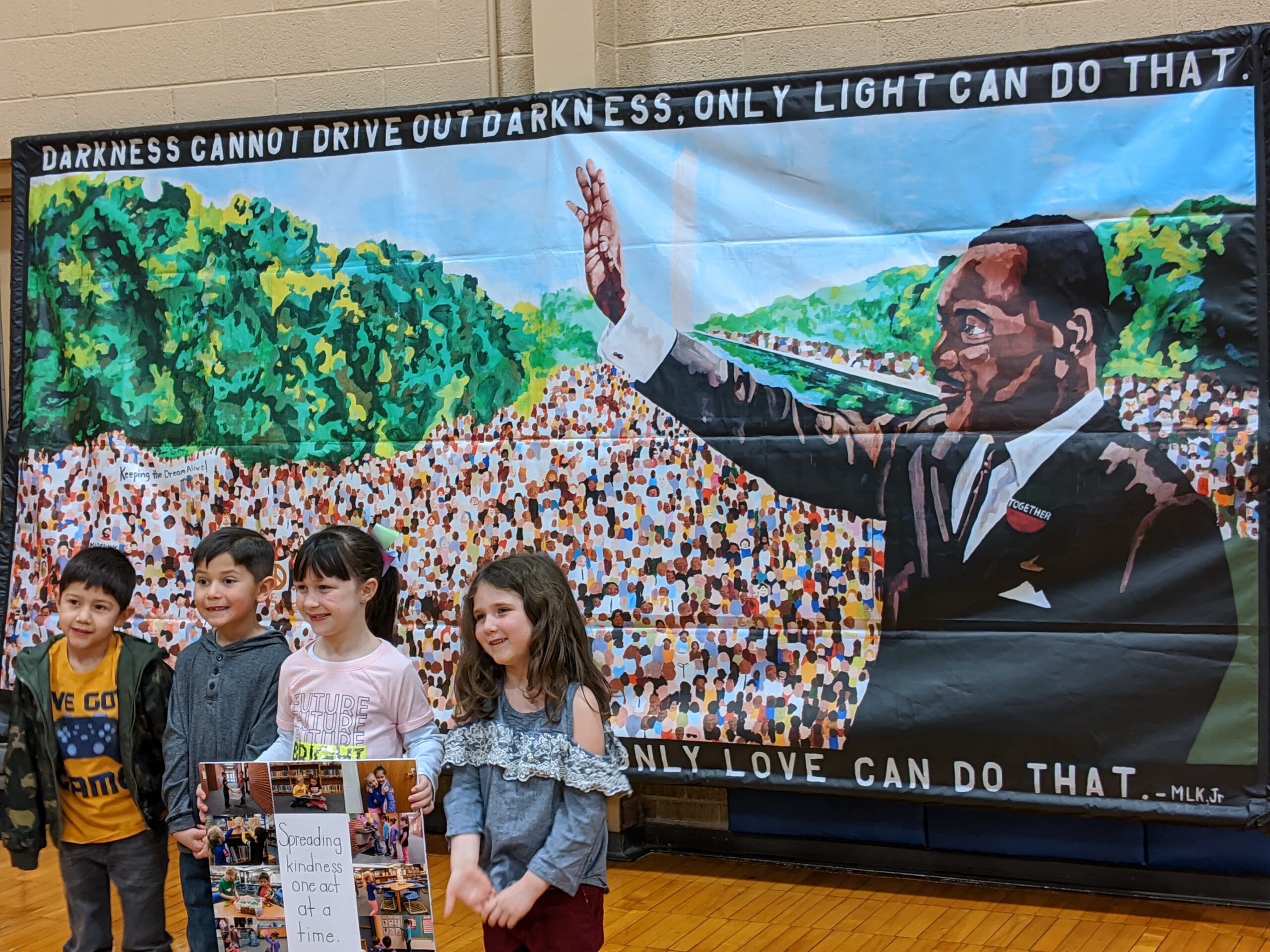 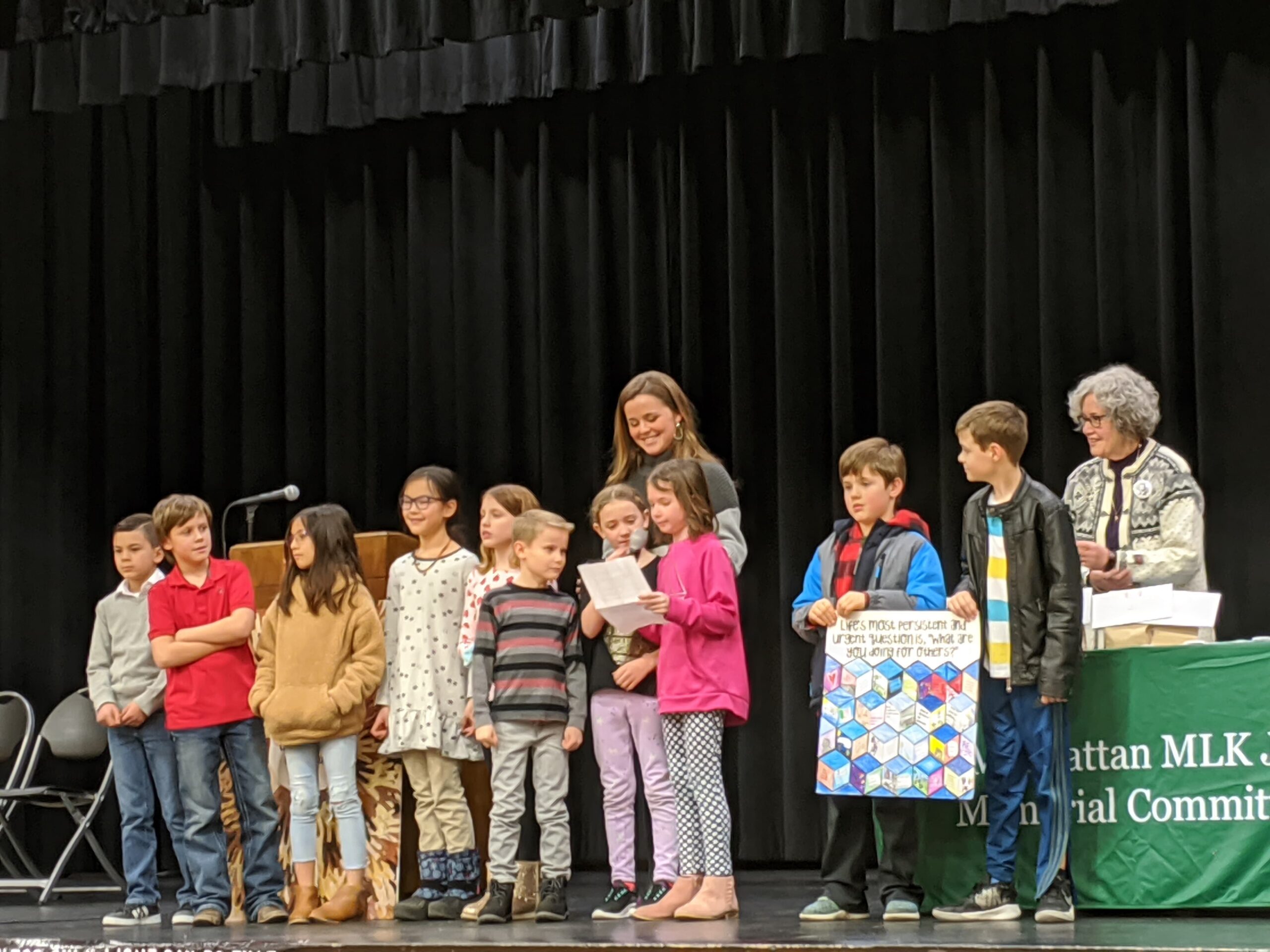 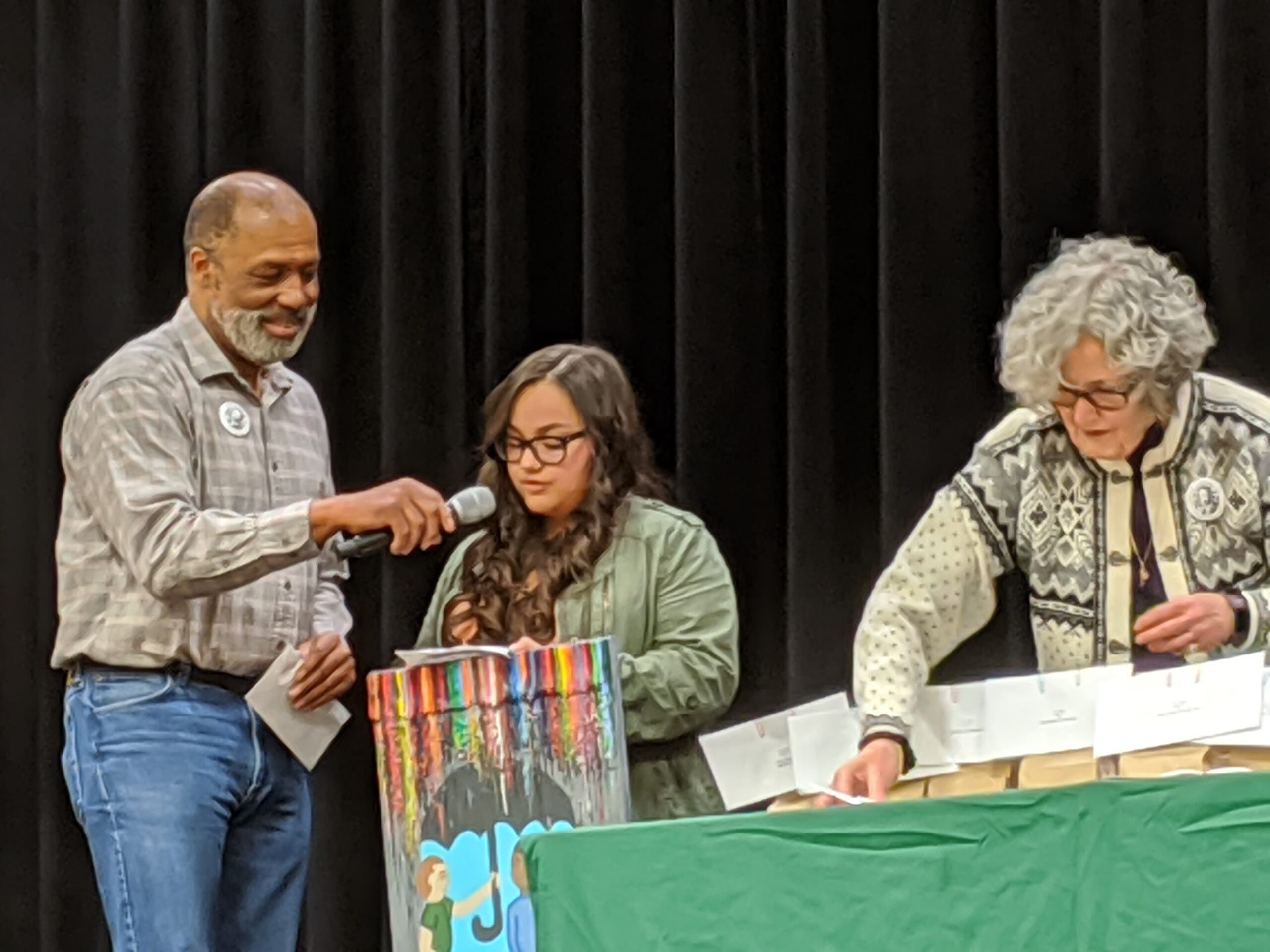 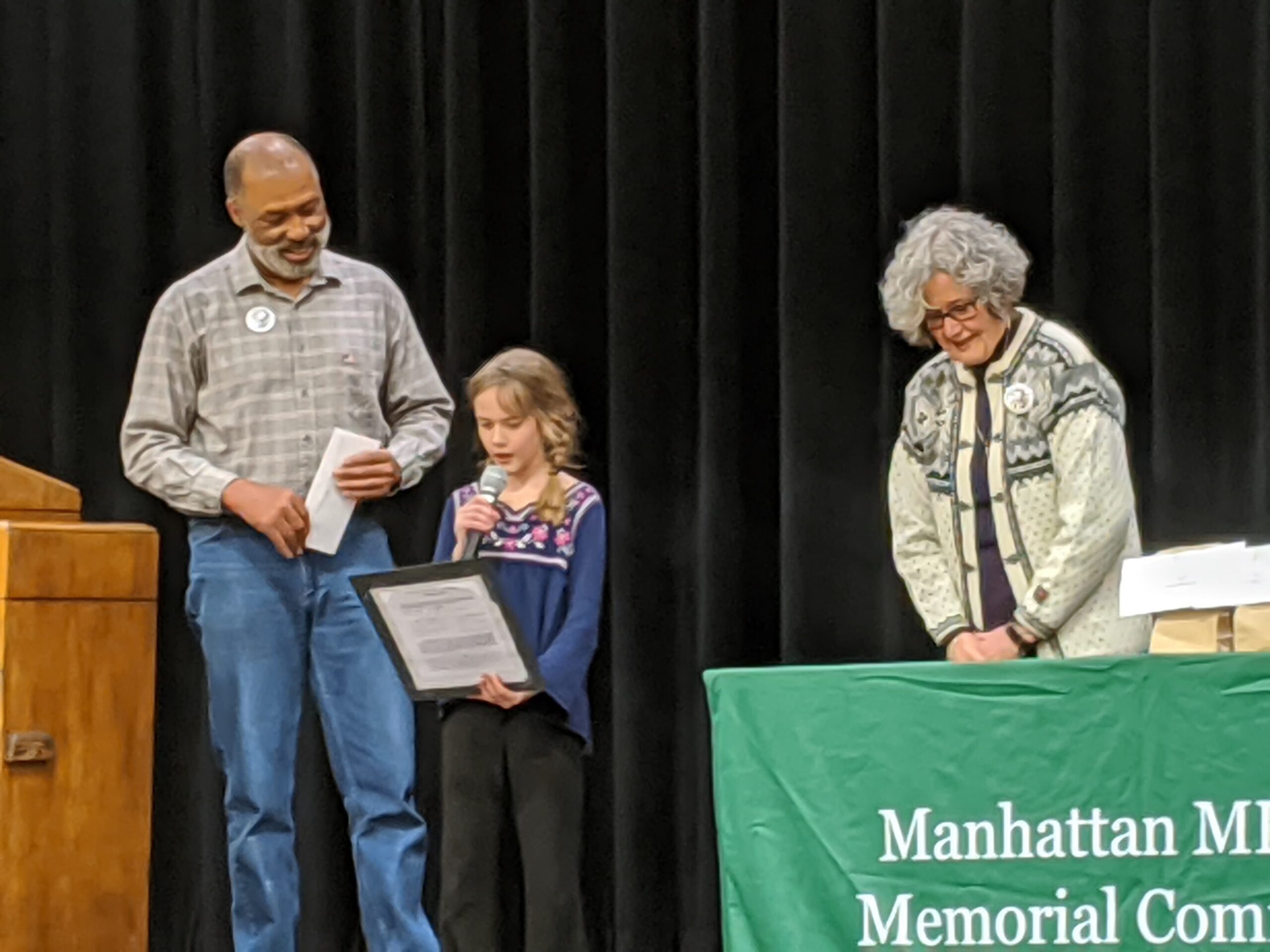