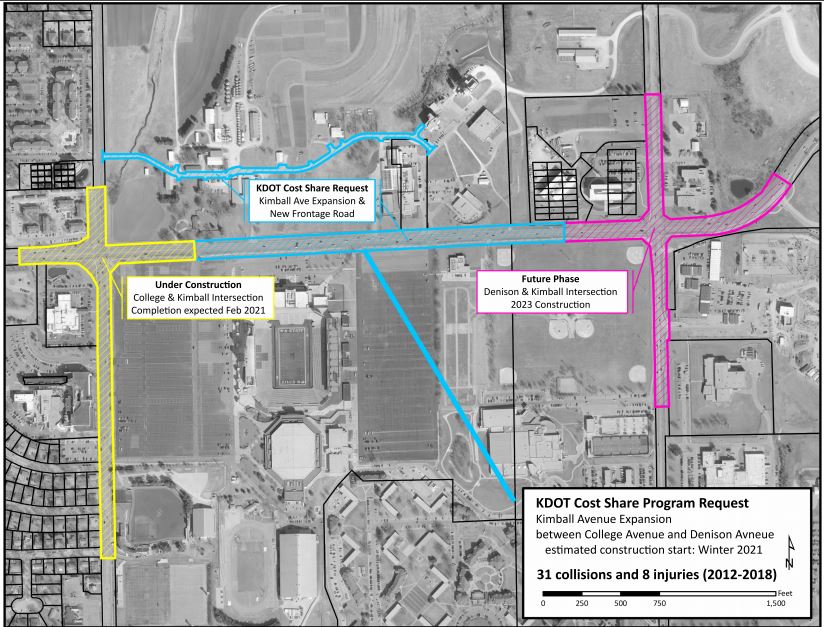 Rendering of upcoming projects along Kimball Ave. as part of the North Campus Corridor reconstruction, now known as The Edge Collaboration District at K-State (Courtesy graphic)

That leaves about $7.1 million that will be covered by city/university, water, stormwater, economic development and bond and interest funds. Mayor Usha Reddi says the city is also in competition to receive BUILD grants, totaling $7.9 million, though considerations are typically given to larger municipalities with higher populations.

“But unfortunately that’s who we’re competing against and sometimes I think the public also needs to understand that’s our competition. That’s why we work so hard at things like the North Campus Corridor and these partnerships. So $7.9 million is not a lot for Wichita, but it’s a whole lot for us,” she said.

Highlights of the plan include additional signals along Kimball near the Wheat Innovation Center and International Grain Science Complex. It also will see overhead Evergy power lines removed and relocated underground as well as a new frontage road with access to College Ave. There will also be a raised median along Kimball between College and Denison Ave.

City Engineer Brian Johnson highlighted safety concerns as the motivating factor behind efforts to remove six driveways along the corridor.

“The vast majority of accidents are left turning off of Kimball, so how do we address that? Multiple driveway entrances, which are a major contributor to that high accident count. There are 214 crashes along that corridor, including three fatalities and 65 injuries,” he said.

Relocation of infrastructure should take about six months to complete with design on track for late this year. Construction is projected to begin on that phase of the project early next year.

The Wichita based company handles processing, canning, labeling and shipping of beverages for national and international clients. Their proposed incentive package will include a 10-year tax abatement on a $900,000 expansion of the former Tallgrass Brewing Company building near the airport. BEV-HUB plans to create 37 new jobs for its facility, paying an average of $16 per hour.

Commissioner Wynn Butler lent support, highlighting that both the economic development funds and industrial revenue bonds would not be negatively impacted, and the wages offered are above the community average.

“This has got three very good elements in it. The lowest paid job here is $16 which is way above the living wage number that a lot of people like to throw out there which is $14. I’m 100 percent in favor of it,” he said.

Deputy City Manager Jason Hilgers says BEV-HUB’s investment goes beyond the expansion and is an asset for the community.

“Their investment of $22 million in equipment in this facility is obviously substantial. This goes well beyond the $900,000 expansion, this is some high end equipment. They’re going to be producing a lot of goods for distribution,” he said.

In other business Tuesday, as part of the consent agenda, $19,000 was approved to be given to the Aggieville Business Association and Downtown Manhattan, Inc. of delayed third and fourth quarter payments due to Transient Guest Tax shortfalls related to the COVID-19 pandemic.

City Manager Ron Fehr says those entities that rely on that tax only received about half of their usual funding.

“It will continue to be a challenge (for those entities) obviously with the finishing touches being put on the Manhattan Conference Center expansion that’s something we’re focused on. I think it will take the country quite a while to get back to the conference attendance component,” he said.

Fehr says these revenue shortfalls will be eligible for SPARK funds being distributed by Riley County.

*Bill Bernard and Brandon Peoples contributed to this story