Looking to shore up future finances, Manhattan is looking at replacing the existing economic development sales tax with one that extends city-wide.

City Commissioners at their Tuesday work session discussed 2021 budget requests from the Manhattan Area Chamber of Commerce and affiliated organizations like the Convention and Visitors Bureau. They further examined Manhattan’s economic development fund and ways to use existing and possible future revenue to support job creation and employee retention, public infrastructure and housing projects as well as debt and property tax reduction initiatives.

Chamber officials requested just over $383,000 in the next fiscal year, a $150,000 drop from its 2020 figures. Part of that is due to Chamber cost savings and delayed hires amid the COVID-19 pandemic which allowed the organization to carry-over funds to offset 2021’s budget. The Chamber also supplements its budget with significant private investment spurred by public funds, officials say.

Economic development funds contributed toward the creation of 1,463 jobs since the city’s first EcoDevo agreement nearly 25 years ago. City Manager Ron Fehr writes in an that is 2 percent higher than the job growth that was projected. Additionally, Fehr writes that “for every $1 invested in economic development initiatives since 1995, approximately $9.36 was leveraged in private sector and other investments” and that 15 infrastructure projects have been funded through the fund.

The Chamber had been approved in December for $350,000 in additional economic development funding through fiscal year 2021. Economic Development Director Daryn Soldan updated commissioners on numerous studies and initiatives targeting the goals identified before the ‘pivot’ in approach to economic development by the Chamber under President and CEO Jason Smith. Some highlights include the roll out of entrepreneurial toolkits, focus on marketing the city’s bio-security presence with NBAF nearing completion and the planned hiring of a workforce development officer to focus on employee attraction and retention.

Additionally, the CVB is asking for close to $925,000, a $400,000 drop from 2020 in anticipation of a 30 percent dip in transient guest tax (TGT) receipts. The CVB contract comes entirely from TGT dollars and funding is dependent on the amount of money available — if revenue falls further than 30 percent, the CVB will receive fewer funds.

“Our goal is to be part of that solution moving forward,” says Soldan. “And with that in mind and with a slightly decreased ask this evening, I want you to know we will continue to maintain our core activities of job creation in 2021. We’ll focus very specifically on those and plan on maintaining very high expectations from all of our partners, our staff and all of our efforts going forward.”

Mayor Usha Reddi also encouraged the creation of a full-time diversity officer, similar to what exists for military relations. She says there are many minority-owned businesses that struggle to set roots in Manhattan and leave or fail without support. Smith says they could look to Topeka as an example in that realm, saying they are looking to work with them through the METL association to better promote diversity in business with Manhattan’s limited funds.

Mayor Pro Tem Wynn Butler also raised the possibility of attracting small businesses looking to relocate after sustaining damages during rebellions against police misconduct and racism across the country.

Commissioners were generally supportive of the requests while stressing that more work needs to be done before a final figure can be settled on.

But city administration noted that dips in TGT have led to funds being insufficient to cover all planned costs from the account. Overall, a $205,000 gap exists, which adds to $2.7 million in revenue gaps facing the city’s 2021 budget. In addition to covering the CVB contract, about one quarter of the 200 grand typically supports select outside agencies while the rest covers various debt service payments. 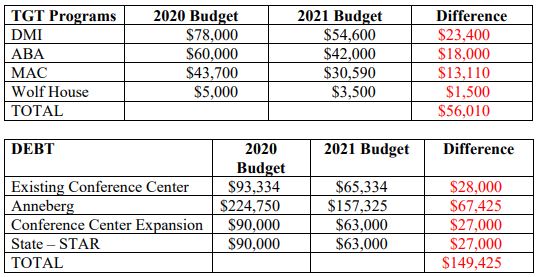 City Manager Ron Fehr says the commission has full discretion to cut TGT funding for outside agencies and could cut the $90,000 for the conference center expansion as that line item was just to buy down the principal and yearly debt service costs. The other debt payments, Fehr says, would need to be funded.

Butler proposed using existing economic development money to fill the gaps in the immediate, though not for all commitments. He reiterated support for funding the Aggieville Business Association and Downtown Manhattan, Inc. while slashing the Manhattan Arts Center and Wolf House budget, especially as the city is implementing hiring freezes, cutting programs and halting employee raises.

“We put them into this transient guest tax simply because we wanted to support them, we didn’t want to raise property taxes to support them, and there was the capability to use the transient guest tax though that’s sort of gone away now,” says Butler. “It’s time to just say sorry, we’re not going to be able to give you that money, and direct people to the Greater Manhattan Community Foundation.

Reddi was open to using the EcoDevo dollars for this purpose in 2021, though did not express support for cutting outside agency funding. She added that she didn’t want the drop in TGT revenue to set the standard if a rebound occurs.

“I also want to be sure that as transient guest tax goes up, that we’re also doing something of that proportion,” says Reddi. “Instead of saying that’s where we did it last year, therefore it’s going to be at that level forever.”

Administration presented figures showing $6.49 million available in the fund this year, though by 2032 that will be halved — not counting in currently unapproved uses of the funds. Officials have noted that the fund could run out if transfers continue and the tax is not renewed or replaced upon expiration at the end of 2022.

That was cause for Butler to advocate bringing the replacement of the existing half cent economic development sales tax with a Manhattan-specific tax to the November ballot. The current tax is a Riley County tax, of which Manhattan receives $3 million per year and the county gets $2 million — some going to smaller cities in the county. Businesses in the Pottawatomie County side of Manhattan are not included in the tax currently. If approved, the tax rate would rise for Pott County businesses while remaining flat for the majority of Manhattan’s land base.

Deputy City Manager Jason Hilgers says the existing tax and its predecessor have been paying for Manhattan’s economic development as well as holding down property taxes by about 2 mills for 20 years.

“This .5 is about Manhattan’s future,” he says. “And to the voter who wants to realize the most for their buck, this is the opportunity to capitalize for the next 12 years.”

Commissioners from both governmental bodies have not been able to come to terms on how to go about replacing the tax. Manhattan wants to take the tax city-wide to raise its annual revenue from $3 million to and estimated $6.5 million and has expressed openness in ensuring Riley County receives the same amount it gets under the existing tax.

Some Riley County officials have expressed concerns about whether that will be true, initially discussing bringing a question to the ballot that would compete with Manhattan’s if they choose to do so. Riley County Commissioners, though, have reconsidered that approach this year. Pottawatomie County officials have also expressed interest in receiving a portion of the funds if Manhattan extends the tax to their county.

Butler, though, says without that revenue yearly — of which around 2 mills per year are committed to the city’s bond and interest fund — long-term planning is not possible and property tax hikes will have to be looked at to support rising debt commitments and the city’s increasing operations costs.

“We’re at the fork in the road,” he says. “Next year we’ll be sitting there trying to do the budget about this same time, and if we don’t have this tax passed then we’re not going to be forward in Manhattan, we’re going to be going backwards.

“We’re going to be talking the same thing — which pools should we close, which services should we cut, which roads should we not plow.”

Deputy City Manager Jason Hilgers says the current state of finances in the city does make future planning difficult and adds hesitation into considering larger projects. Officials also noted they have three years to decide on the tax, though noted this year is a presidential election and will see greater voter turnout compared to following years.

“I do know our unemployment is up and I do know people are struggling,” she says. “I would feel a little insensitive thinking we could put this on the November ballot for this year.”

If brought to the ballot, commissioners would have to decide on how they would want the revenue divided. Often, policy intent for the tax is spelled out via a concurrent resolution on the use of the funds.

No consensus was reached, but options presented included the current 35/65 break down for debt service and EcoDevo/infrastructure projects or a 20/20/60 split between debt service, Chamber EcoDevo initatives and public infrastructure. Commissioners also expressed the need for a robust marketing campaign to inform residents of the planned use of the funds centering on job creation as well as debt and property tax reduction.

This unapproved ballot question was presented as a starting point from which to develop the final submission. (Courtesy of the City of Manhattan)

Commissioner Aaron Estabrook advocated for the inclusion of ‘workforce’ housing initiatives specifically noted in the question. He says quality of life and housing a major part of economic development and employee attraction and retention and should not be overlooked.

“I will not move forward if this sales tax is subsidizing property tax, but it’s not giving the person paying the sales tax that doesn’t own property any benefit for voting for it,” he says, adding the question would be dead on arrival in this environment otherwise.

If included, Estabrook would join Butler and Commissioner Mark Hatesohl in approving bringing the question to the 2020 ballot, swinging the decision. He says it makes sense as economic development in Manhattan does not stop once one hits the county line.

Hatesohl says he wouldn’t support every housing initative, but would be open to those that should work well and simply.

Commissioner Linda Morse also echoed the need for housing inclusion in the question, though held off on explicitly supporting bringing the ballot question forward this year. She saw the conversation as a distraction from immediate budget issues, noting the proposed tax wouldn’t go into effect until January 2023.

“We still have issues to solve, the same issues we started the evening with, whether or whether not we do this.”

Manhattan has a deadline of September 1 to submit a question for this November’s ballot. Officials have three more work sessions planned to work out the 2021 budget.