You are at:Home»Local News»Manhattan exploring E-Scooter regulations with a focus on safety 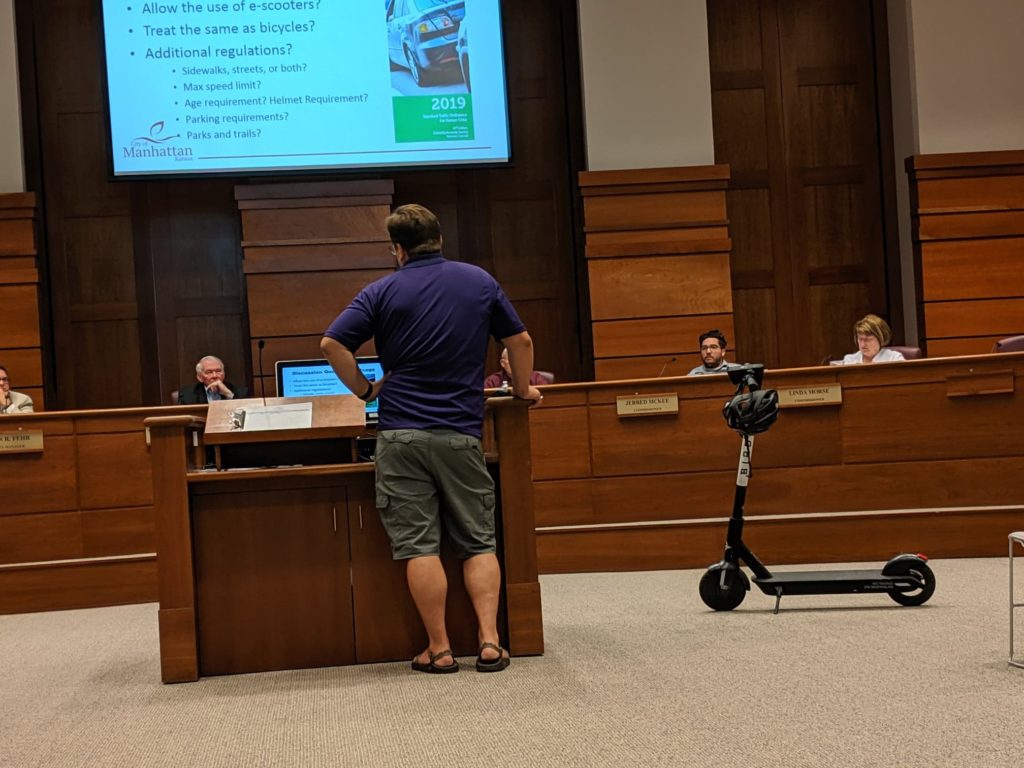 Brandon Savage speaks to the Manhattan City Commission about E-Scooters with a demo of a Bird scooter, Tuesday, July 16, 2019. (Nick McNamara / KMAN)

While still a ways off, Manhattan may see electric scooters become a community fixture in the future.

With cities like Topeka and Wichita joining in the wave of cities with E-Scooter specific regulations — which are cropping up across the U.S. — the City Commission at its Tuesday meeting was open to further exploring allowing them in Manhattan under the right conditions. Much of the discussion was focused on safety, from helmet requirements to speed limits.
The State of Kansas defines an E-Scooter as a “self-propelled vehicle having at least two wheels in contact with the ground, an electric motor, handlebars, a brake, and a deck designed to be stood upon while riding” and regulates them as they do bicycles. Though the state regulates them the same as bikes, they did allow room for municipalities to pass and enforce more strict rules and regulations. Manhattan’s current bicycle rules allow riding of bikes on streets and sidewalks — except on sidewalks Downtown or in Aggieville.
The Bicycle and Pedestrian Advisory Committee and the Parks and Recreation Advisory Board had general consensus that E-Scooters should be allowed in the community, though advised staff look into speed limits on sidewalks.
“They saw the benefit as an alternative mode of transportation,” says Jared Wasinger, assistant to the city manager.
Topeka and Wichita are the first cities in Kansas with their own E-Scooter ordinances. Both allow such scooters on streets with speed limits of 40 miles per hour or lower in Wichita or 35 mph or lower in Topeka — unless there is a bike lane. Topeka allows them on sidewalks with limitations in a certain district like Manhattan does in Aggieville or Downtown while Wichita does not allow E-Scooters on sidewalks at all. Topeka has a 15 mph limit for the scooters while Wichita has a 20 mph limit — which can be programmed into rental E-Scooters by the rental company. Topeka requires riders be 16 or older while Wichita only has an age restriction of 18 or older on rentals in their agreements with the rental companies. Topeka requires riders under 18 to wear a helmet. Both cities have restrictions on where the scooters can be parked.
Brandon Cleaver of Bike Walk MHK was one of a couple residents who encouraged commissioners to approve regulations that allowed for scooter use in the city. He says the geofencing — or software-based prohibitions of where one can end a rental — are extremely accurate.
“In cities or communities where I’ve used these, if you are literally one step out of the box it won’t let you turn it off,” says Cleaver. “So the market disciplines behavior because you’ll just get charged as that scooter is in the bush or unaccounted for.”

Area business representatives had some concerns about the possibility of Electronic scooters on Manhattan road and walkways in the future.

Downtown Manhattan Director Gina Scroggs says they want the district to remain a walking district and don’t want to see scooters ridden or stashed on sidewalks. And while bicycles are prohibited on sidewalks Downtown and in Aggieville, Scroggs says those rules are not always followed and its only realistic to assume the same will happen with scooters.

“I’m not here to just say no, no, no,” says Scroggs. “But really have to have the conversations about safety, have to have the conversations about enforcement.”
Both Scroggs and Aggieville Business Association Director Dennis Cook say they’d like geofencing put in place for their districts if the city ever welcomes E-Scooters.
“Our concern would be that Aggieville would be a destination place and they would just end up everywhere,” Cook says.
Multiple residents also spoke during public comment with concerns for safety. RCPD Director Dennis Butler didn’t weigh in on whether or not they should pass an ordinance or not, but did urge the city to require helmets on E-Scooters.
“My initial concern — and I’m not an expert in E-Scooters and that hasn’t changed throughout tonight’s discussion — is the idea of authorizing a motorized vehicle of some kind to operate on city sidewalks anywhere in the city, not just Aggieville and Downtown.”
Commissioner Linda Morse was in support of working with scooter companies in a pilot program after they passed specific rules and regulations on their use and evaluating if any issues or unforeseen costs arise.
“Whether that’s an E-Scooter rack — I don’t want to pay for that,” says Morse.
Commissioner Wynn Butler echoed that sentiment. Butler also told City Staff they need to craft their ordinance to take into account personally owned scooters rather than just rentals.
“Some of them look like little mini-motorcycles that’ll go 54 miles an hour,” says Butler. “And so private citizens can buy those and the regulations would be the same.”
Commissioner Jerred McKee says he was conflicted on the topic as he saw a mess of scooters in Washington D.C. during their recent trip to the capital in the past 3 months. While he supported looking more into regulations and agreements with scooter companies similar to Wichita, he was adamant that the city require helmets during rides but questioned whether that would impact market penetration.
“I don’t know anybody who goes to Aggieville with a helmet,” McKee says. “I don’t know anybody that rides aTa and says for the last mile of my trip I’m going to carry a helmet.”
Mayor Pro Tempore Usha Reddi says the industry is still in its infancy and would like to work with the local Town/Gown group on the ordinance and also ensure that KSU is onboard and included in the process. KSU Chief of Staff Linda Cook says they are open to working with them on the process. Reddi also proposed they look into limits on the times that scooters can be rented and that once regulations are in place that the city’s pilot program includes more than one rental company.
“So we don’t think that one vendor represents all vendors because all of them might be doing it differently,” says Reddi. “Maybe that’s an option to look at 2 or 3 vendors and see which one works and see where we have to tweak it.”
Mayor Mike Dodson compared the situation to the initial debut of the automobile and drones and the catch up game that governments had to play to regulate the use of that new tech. He echoed previous sentiments on the importance of safety concerns in their ordinance, but also in keeping the regulations simple.
“When you look at the Kansas State driver’s license test, that’s got a lot of piece parts that I’d argue a lot of people don’t understand,” says Dodson. “You have to make this so a user can get on there with some assurance that he’s not breaking the law all the time.”
No ordinance on the regulation of E-Scooters was passed as the item Tuesday was just a discussion item.
Share. Twitter Facebook Google+ Pinterest LinkedIn Tumblr Email