City of Manhattan administration will continue working on a potential ballot question to raise the city’s sales tax rate. Manhattan City Commissioners expressed interest in sending the decision to voters in November at their Tuesday work session.

They’re looking at a 0.3 percent sales tax increase, which would raise the base rate in Manhattan from 8.95 percent to 9.25 percent. Deputy City Manager Jason Hilgers says the intent is to prevent a rise in the city’s property tax rate. Manhattan has seen revenues flatten in years of late in the midst of major community projects like levee and airport runway upgrades, Aggieville and North Campus redevelopment, as well as a new maintenance facility for local crews and a recreation center in the Douglas Park area.

“You’ve already seen a lot of these projects at the point where you’re making decisions,” says Hilgers. “It behooves us to look at how we’re going to pay for them before we go any further.”

Manhattan currently draws 1 percent of the revenue from sales taxes, which would rise to 1.3 percent if the question reaches the ballot and voters approve. Areas with self-imposed tax increases to fund improvements will have varying higher rates, with the Manhattan Town Center holding the highest rate of 10 percent.

Those projects are planned for the next decade with debt service running through 2050, but there’s a $50 million gap in their funding. The city’s estimations show that a 0.3 percent sales tax increase would fill the gap and cover interest as well and could help with some general fund needs as well. To make up the same funds with property taxes would require an increase of 6 mills.

Hilgers also presented analysis on potential impacts of raising sales tax versus property tax enough to cover the funding gap. Based on an average income-earner spending 30 percent of their income on taxable goods and services, those earning $12,500 per year would see an increase of $11 per year in sales tax expenses. Those making $200,000 per year would see a yearly $180 increase. Owners of residential homes valued at $150,000 would see a yearly property tax increase of $121, and a $500,000 home would be charged $403 more per year.

The tax would have no sunset date as those are limited by the state to 10 years and they would need the full 30 years of revenue to cover the upcoming costs. Hilgers also says commissioners can decide that some projects need to be put on the back burner if there is no will to increase either sales or property taxes.

“If we’re not going to do them, we can start taking those off the list,” says Hilgers. 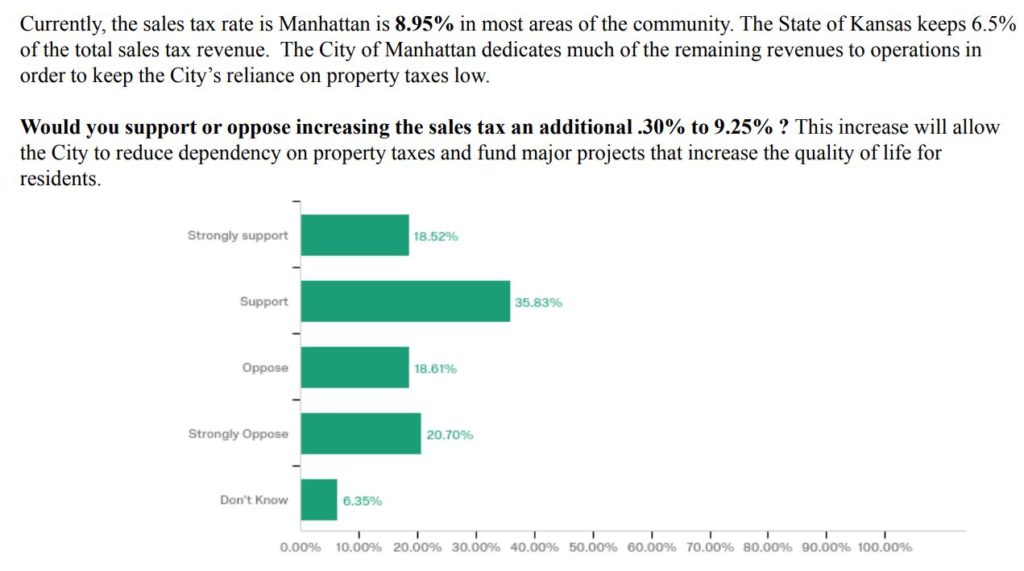 Preliminary responses from the 2019 Community Survey show a majority support a 0.3 percent sales tax increase. (Courtesy of the City of Manhattan)

Commissioners were largely supportive of sending the question to the ballot. Mayor Pro Tempore Usha Reddi was on the fence about a tax increase. She proposed that the question be altered, saying it’s too loosely worded.

“I think all the other questions I’ve seen — whether it was Riley County, [USD 383] or the city — there were more specifics exactly what is that money going towards,” Reddi says. “I think I would feel comfortable if it was dedicated to these projects.”

Commissioner Wynn Butler says he’d prefer no tax increases, but constraints like that aren’t necessary and was supportive of sending it to the voters. He also says if the vote is no and the alternative is a mill increase, they won’t get his vote on the projects.

“That champagne appetite we have, it’s got to be funded somehow,” Butler says. “Otherwise, it’s not going to happen — we’re going to drink some bad beer, I guess.”

“I don’t think it is my intention to limit [the funds]by name to these 10 projects,” Morse says. “But there’s a lot of difference between totally no control and listing them [by name].”

Commissioner Jerred McKee says if its too focused, future commissions will get wrapped up debating the details and original intent.

“I would rather keep it flexible for future commissions with the understanding through these minutes that that was our focus,” says McKee.

A majority including Mayor Mike Dodson wanted its wording refined so it informed voters what projects the tax would fund.

“I think we need to be fairly — if we can — specific about where this is going,” says Dodson.

Multiple on the commission said that if the sales tax increase is intended to hold down the mill levy, they don’t want to see significant increases to property taxes in the future. Dodson and other commissioners also emphasized the importance of educating the public on the intent and goals behind the increase.