You are at:Home»Local News»Manhattan eyeing Arts in the Park venue upgrades with private funding

Phil Howe, founder of KS State Bank, approached the city about improving the Arts in the Park venue’s seating and accessibility in 2018 and funded initial designs through Anderson Knight Architects based on ideas gathered from a K-State design contest. Concepts currently feature a sloped seating area accommodating 989 people as well as artificial-turf lawn seating, 108 parking spots, four family-style restrooms and a 12,000 square foot plaza area behind the seats. Many of the elements address concerns identified during the creation of the 2018 City Park Master Plan. 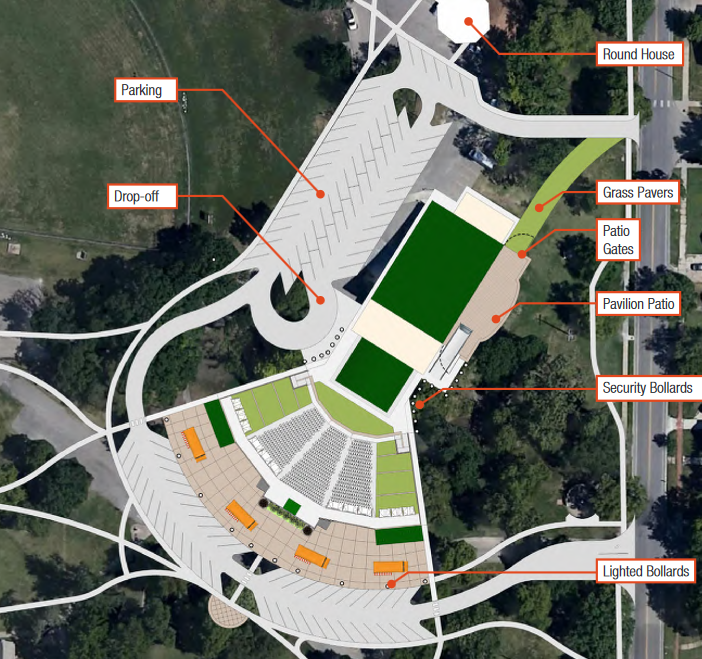 Concepts of the revamped seating and parking layout near Wefald Pavilion.

According to staff, Howe has expressed interest in further supporting the project as well. Parks and Recreation Advisory Board Chair Ed Klimek says with Howe’s interest, they have the financial base in place for further fundraising.

“We’re going to try to keep it at a grassroots, community type project,” says Klimek. “After all, that’s what Arts in the Park is.” 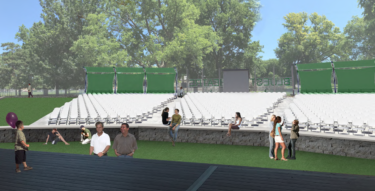 Concepts of potential seating upgrades at the Arts in the Park venue.

Rough estimates for the project are in the $1.5 million range. Klimek says that will make them take a different approach than the privately-funded Johnny Kaw Plaza, but was confident they could raise the funds successfully.

Due to the scope of the project, Parks and Recreation Director Eddie Eastes says he’d like to see the project to go through a design-build process. In a design-build agreement, one party is responsible for both design and construction and often requires them to present a guaranteed maximum price for the total project.

“So we have a known, understood and agreed upon number before we go to final design and to actual construction,” says Eastes. “That helps that fundraising effort as well.”

The City Commission provided feedback on concept designs Tuesday. Multiple commissioners commended the private funding effort including Linda Morse, saying it will be a needed “freshening” for the venue.

I’m so pleased that there’s someone interested in initiating a fundraising process like this,” says Morse. “That […] takes the total burden off of the city.”

Commissioner Wynn Butler offered a word of caution, saying he didn’t want the situation to turn out like Peace Memorial Auditorium.

“I think the city ended up putting in half a million dollars on that if my memory serves me correct,” says Butler. “And I don’t want to see that happen with this, where all of a sudden the city’s picking up parking lots and things of that nature.”

Butler also questioned whether the plans removed too many trees and green space, noting the City Park Master Plan did not account for more parking. Mayor Pro Tempore Usha Reddi echoed those concerns, especially in regards to plans for artificial turf.

“I’m kind of hesitant towards that — mainly because of the heat, but also because it’s artificial,” says Reddi. “If we can keep it as natural as possible that would be critical, too.”

Mayor Mike Dodson says the commission needs to look at the issue of increasing parking “more holistically,” saying they need to consider how far they expect people to walk to get to the bandshell.

“Particularly those with handicaps,” says Dodson. “You’ve got to have some kind of compromise so you can get to the venue.”

Eastes noted that while impervious surfaces may be introduced in some areas, overall the 2018 City Park Master Plan includes projects that will remove them as well. Eastes says that drainage issues will also be examined as the design process continues.

Going further than enhancing facilities, Klimek said that enhancing the entertainment offerings could make the venue an attraction for visitors and residents alike and that there’s an assortment of local and regional talent that can be tapped. He also added the city upping its support for the program from around $45,000 could provide lasting assistance for the effort.

“If we can double that or even get it to $100,000, we can bring in some really nice talent and have that as a community fund,” says Klimek, noting it could be an endowed fund into the future.

Klimek additionally encouraged exploring the creation of a “Friends of the Arts in the Park” to help with fundraising as well.

Architects will take the commission’s feedback as they continue with concepts and bring the discussion back to the body at a later date.