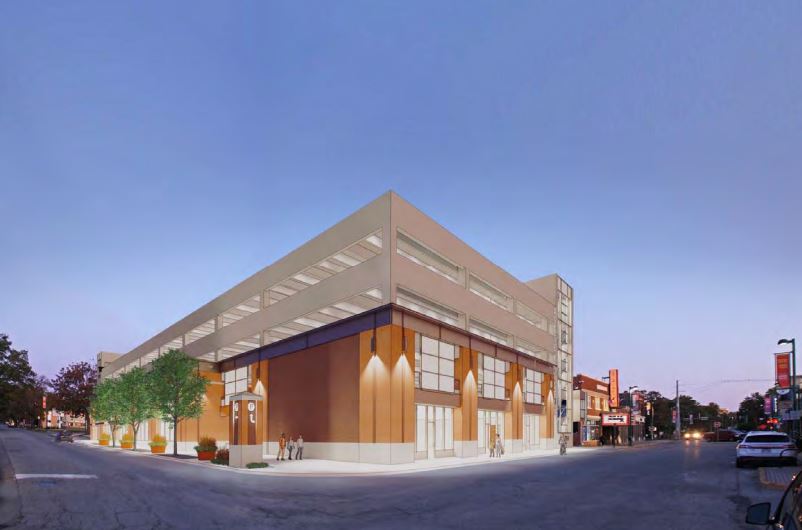 Manhattan City Commissioners preferred an open design for the upper floors of a planned parking garage in Aggieville. (Courtesy of the City of Manhattan)

As Manhattan continues work to begin construction on an Aggieville parking garage, city commissioners Tuesday voiced support for the cheapest option presented for the garage’s exterior.

The parking garage in Aggieville along with street and utility improvements along Laramie and 12th Streets are the first of an estimated $30 million in public projects identified in the Aggieville Redevelopment Plan. On city officials radar for years, they see it addressing inadequate parking in the business district and serving as a catalyst for new investment.

“I’ve heard from multiple development opportunities that are waiting for that [guaranteed maximum price]to be approved, which basically moves this project forward,” says Deputy City Manager Jason Hilgers. “As soon as we start construction, there are other dominoes waiting to follow for additional redevelopment, reinvestment in Aggieville.”

That’s important, Hilgers says, as increased property tax revenue generated as a result of increased property valuation over the 20-year life of the tax increment finance district will be earmarked for public infrastructure improvements in the district. The more valuation increases, the greater the funds Manhattan has to put into redevelopment in Aggieville.

The five-floor garage is planned to feature brick, stone and glass work in line with Aggieville design on the lower two floors and display open, stylized concrete on the upper levels to offer a visual break. Commissioners cut approximately $373,000 off the overall budget, currently estimated around $16.3 million pending the commission’s final approval, by choosing design options free of decorative metal facade work on floors three through five. Other options included a kinetic wall made up of metal cards that wave with the wind or perforated, corrugated metal or bar grating.

Officials presented commissioners with 4 garage design composites and the net reductions in the overall budget for each option. (Courtesy of the City of Manhattan)

“I am not a fan of the metal,” says Commissioner Linda Morse. “It doesn’t fit in with anything else in Aggieville.”

Morse and Commissioner Aaron Estabrook both expressed a preference for looking into coloring the concrete on the building instead, with Morse adding there is also the possibility to stamp a pattern into the material. Reddi says she wasn’t committed to any particular exterior, but opted to support an open facade on the upper levels of the garage.

Commissioner Mark Hatesohl opted to support the kinetic wall option, saying the design could be an attraction of sorts on its own. Mayor Pro Tempore Wynn Butler supported the bar grating option, about $100,000 more expensive than an open facade, to save the money for other construction and development costs.

The “Alley in the Ville” is envisioned as a photo destination, entryway into the district and potential hangout during events. (Courtesy of the City of Manhattan)

Commissioners also weighed in on design possibilities to make an alley way that will crop up between the new garage and existing Rally House building into a destination and gateway into the district. Officials presented options for the alley including a timeline of Aggieville on the wall, colorful overhead covering, decorative paving and minimal plants and seating. The cost for that project is estimated at $805,000. 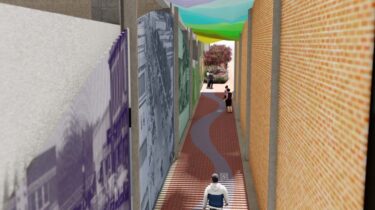 A proposed timeline of Aggieville history is proposed to adorn the walls of the “Alley in the Ville.” (Courtesy of the City of Manhattan)

“The vision for that is to have a lot more people walking through there, becoming a place where you want to take pictures and make it more memorable than what it is,” says Reddi.

Hilgers says there was some interest among stakeholders to make the alley less Kansas State University centric, though says with a year of construction still ahead there is a lot of time to collect input on the alley’s features. He also says the bridge planned to link to the second floor of Rally House — being eyed for redevelopment as office space — could serve as a judge’s booth to judge parades or even a performance area for bands. 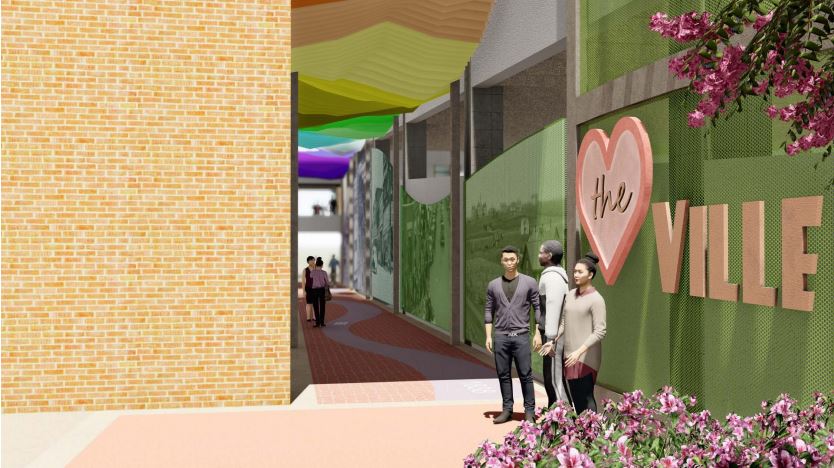 The “Alley in the Ville” might also include branded signage for photo opportunities. (Courtesy of the City of Manhattan)

Construction Manager At Risk McCownGordon anticipates piecing out the project and returning with multiple guaranteed maximum prices for the work — one for the pre-construction site work and material procurement and a second GMP for the actual building. Work is slated to begin by early November and last a year.

Hilgers says the TIF district is estimated to generate $12 million, though could outperform that if growth continues in the district. He further identifies a possible $6 million in funding between new market tax credits and CARES Act grants through the Economic Development Association. Adding in $1.2 million in water and stormwater funds due to planned utility projects, the $800,000 sale of the parking lot that is becoming the new Courtyard by Marriott Hotel and a potential $700,000 sale of the lot behind Kites, Hilgers says they currently have a possible $20.7 million in funding identified for Aggieville redevelopment.

Hilgers says there have been conversations with the K-State Institute for Commercialization about establishing a presence in the garage, as there are multiple potential retail or office spaces planned for the first floor. He says that, as well as the possibility of a new Riley County police substation in the building are enticing to potential investors as well. Hilgers says they can leave those shell spaces unfinished until tenants are solidified.

“We need to commit to the 2,000 square feet for the RCPD substation even if that means us finishing out the space for that,” says Mayor Pro Tempore Butler. “Now, that’s not supporting the training area, but for the substation that’s vital.”

“If the county can’t fund it, we can save a quarter of a million dollars on the facade — we can use part of that money to build the substation or perhaps you can build it into some of the grant applications.”

A majority of commissioners echoed Butler’s call to commit space for RCPD, though specifics on the deal and whether they will also provide 3,000 to 4,000 additional square feet in meeting and training space in the garage to the department still needs to be worked out.

RCPD Director Dennis Butler says a passing comment by Riley County Chairman Marvin Rodriguez indicated they may not be able to afford the move this year due to the pandemic. He says he will re-approach the board now that the city is resolute in their commitment, also noting that the pandemic highlighted the department’s difficulty finding adequate space to conduct meetings and training while physical distancing.

Hilgers says GMPs on the project will start to come back for approval by October, when they’ll have a better idea what the final budget for construction will look like.