You are at:Home»Local News»Manhattan looks at ‘bone-deep’ cuts to fill FY’21 funding gap
Manhattan is considering 5 to 10 percent cuts in city departments for the 2021 budget as officials look to fill a $2.7 million gap in revenues and expenditures.
City Commissioners Tuesday heard from department heads in a session that was extended past the midnight stop time implemented in 2018 by 4 to 1 vote, with Mayor Pro Tem Wynn Butler opposing.
Commissioners were also unanimous in authorizing sending the budget to publication in order to approve it by the state-required August deadline. It features no increase in the mill levy, though about half a million dollars in additional property tax revenue is anticipated due to new buildings and renovations. Overall, a $166 million budget will be published, $3 million over 2020’s figures largely due to sales tax revenue earmarked for project costs related to the new middle school recreation centers. Once published, the budget can only be further decreased. Publication is planned for Friday, with a public budget hearing planned for August 4th, the first in-person meeting for the commission since April.
Administrative staff had previously presented a budget option highlighted by $1.2 million in possible fund transfers in addition to $1.5 million in targeted cuts to fill the hole, but those cuts were targeted at part-time and seasonal staff and programs largely in the Parks and Recreation Department. Finding the proposal unpalatable — which would have closed CiCo and Northview pools for another year — commissioners instead asked each department to highlight how they would go about implementing across the board cuts. City Manager Ron Fehr says some of them are ‘bone deep.’
“Many of them are already operating on cuts with open vacancies,” says Fehr. “We put a selective hiring freeze on most departments so most of those vacancies continue into next year and the proposed cuts only add to those.”

Proposed fund transfer breakdown, courtesy of the City of Manhattan

Department heads painted a tough picture for the commission. Amid multiple years of plateauing revenue, they say they’ve been asked annually to make internal cuts to training opportunities, equipment and software upgrades and have held positions vacant with similar or increased workloads. Employees in various departments are also wearing multiple hats and working beyond the traditional scope of their jobs as a result, department heads told commissioners Tuesday. 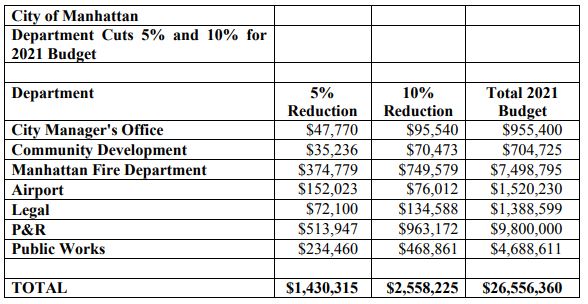 Multiple departments spend most of their budgets on personnel, with heads saying cuts would require cuts in full time employees or replacing positions with part-time roles and likely reduction in service availability and speed. Multiple Parks and Rec. programs also would still be eliminated as well.
At the 5 percent level, the cuts in the City Manager’s Office would cut summer K-State internship for student government officials and reduce the travel budget. At 10 percent, all travel for employees and commissioners would be cut and would reduce hours for an administrative assistant that assists in numerous departments and with commissioners.
Community Development would cut 2,080 work hours at 5 percent, cutting a planner job that works with the housing and zoning appeals boards. Ten percent would further cut another 1,191 hours of internship work, many of whom serve as primary liaisons to various citizen committees.
Fire Chief Scott French requested they leave his budget untouched in 2021, saying further reductions in their training budget would result in more difficulty recruiting and retaining firefighters. He also said cuts would reduce code services capacity to do proactive code enforcement and could reduce their capacity to adequately inspect development.

Reductions in airport budgets could not occur in some areas due to the need to keep up with certain federal requirements and functions, but 5 percent reductions would reduce the budget from $1.5 to $1.44 million and 10 percent to $1.37 million. That would reduce marketing, pavement and building maintenance, travel including for training and their ability to purchase ice and snow treatment supplies. The airport, though, did receive an FAA grant that helped out in 2020 and remaining funds are projected to cover around one third of its ’21 budget.
Legal is one of the departments highlighted during a conversation about the Organizational Excellence Initiative in January as being chronically understaffed. The department has four full-time employees, below the national average of 6 for similarly sized organizations. Prior to any additional cuts, the assistant city attorney position has already been cut for ’21. City Attorney Katie Jackson says the department’s not grown since its formation in 2012 and any cuts will reduce services for those in the court system — possibly resulting in more cases going to collections and more warrants being issued — as well as to city departments. 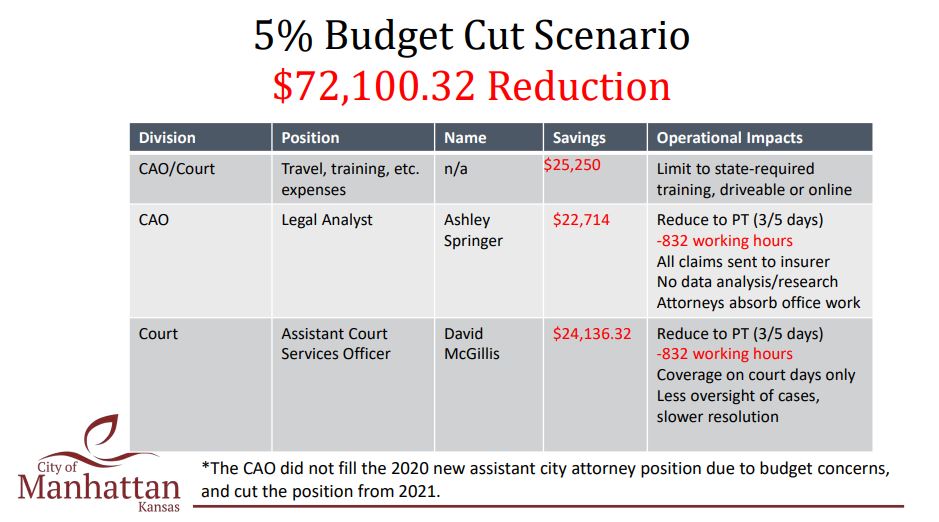 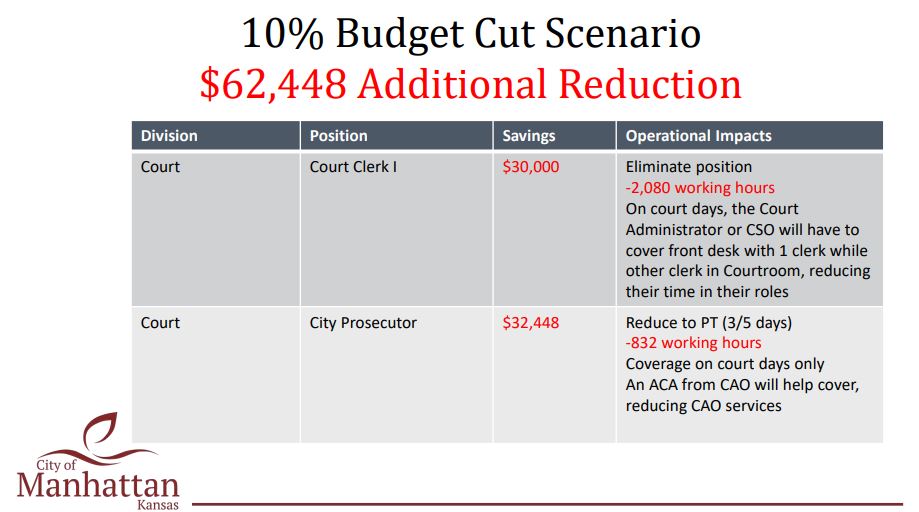