You are at:Home»Local News»Manhattan officials talk 2020 legislative hopes with legislators

Manhattan officials are hoping the legislature will explore new ways to generate money for bioscience districts.

The city proposed the legislature expand tax increment financing laws to allow cities to receive a portion of income tax money from the state from newly created bioscience jobs within designated bioscience districts. The idea is to create a revenue stream for cities in order to incentivize private lab development and improve public or private infrastructure in such districts. Manhattan City Manager Ron Fehr says the legislation is on the books already in the Economic Growth Act of 2004, which led to the creation of the Kansas Bioscience Authority. 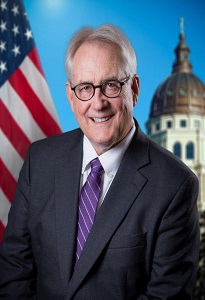 Hawk says it’s a great idea and one that will pay off big dividends down the road.

“In a way, it doesn’t really cost the state anything,” says Hawk. “You could say if that job was here, the state would get the money — but if the job doesn’t come here, we wouldn’t get the money.”

Phillips, on the other hand, says the state would lose out on potential revenue and wants to hear the cons of the plan. Even so, he says it could be a great way to stimulate local economies through job growth.

“We need to figure out ways to stimulate job creation and growth of our workforce,” says Phillips. “And if this can do it, without creating too many adverse impacts, I’m positive on the reaction to it.”

Also in the city’s top action items: restoring revenue sharing and property tax reduction transfers from Kansas to local governments. Statute requires that the state fund the Local Ad Valorem Property Tax Reduction Fund and City County Revenue Sharing Fund, but allocations haven’t been made at all since 2004. Local governments have missed out on receiving billions, as a result. In Manhattan and Riley County’s situation, that amounts to multiple million dollars per year.

Carlin says Gov. Laura Kelly’s tax council was in favor of funding the transfers once again, but the details aren’t fully set. 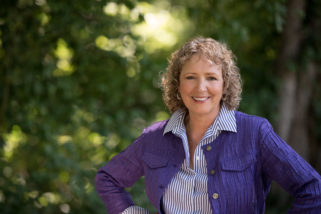 “I don’t know if we’ll look at that and adjust any funding,” says Carlin. “Or if we’ll just try to start funding it maybe on an annual basis to see how that works.”

Phillips says he’s had the opportunity to look over one of the governor’s budget profiles and says the plan he’s seen would partially restore LAVTR and CCRS funds.

“I could support that,” says Phillips. “It’s all going to be about how much money can we really afford to spend and what do we rank as our priorities.”

Phillips said even though the state has a healthy ending balance, Kansas has a high debt load and they have to be careful about raising spending and maintain financial prudence. 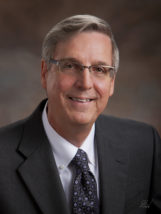 “We know in the out years that ending balances will be depleted — and the same’s on the tax policy,” says Phillips. “We shouldn’t be overly aggressive about cutting taxes and putting ourselves back into negative revenue projections.”

Manhattan also reiterated its opposition to the use of what has been called the “dark store theory” or “alternative property valuation,” advocating for the addition of one sentence into an existing ordinance that would prohibit its use.

The dark store theory is often employed in appraisal appeals by big box retailer tax reps. They argue that their properties should be appraised as though they were vacant and not account for current commercial use, conflicting with standard appraisal practice. Companies often seek a 50 percent reduction of their property appraisal and thus their property tax bill.

Two recent Board of Tax Appeal cases in Johnson County resulted in wins for retailers, which Carlin says sets a bad precedent.

“I think that is a really bad sign for the rest of the state,” says Carlin. “Owners of those properties have options.”

She says those options aren’t necessarily available to smaller retailers, who Manhattan officials say are left to shoulder the burden in these cases.

The City of Manhattan further advocated repealing the property tax lid or to add the employee benefit fund as an exemption, similar to police and fire funding. Additionally, they would prefer to remove the special election process to raise taxes over the lid and instead replace that with a protest petition. Manhattan officials would also like to see increased funding for Manhattan Area Technical College and Kansas State University, increased infrastructure assistance for local governments, Medicaid expansion, and for the legislature to fully fund KPERS — which Gov. Kelly is advocating to re-amortize which would cut costs in the immediate but increase the debt load in the future, according to Phillips.

View the full summary below: 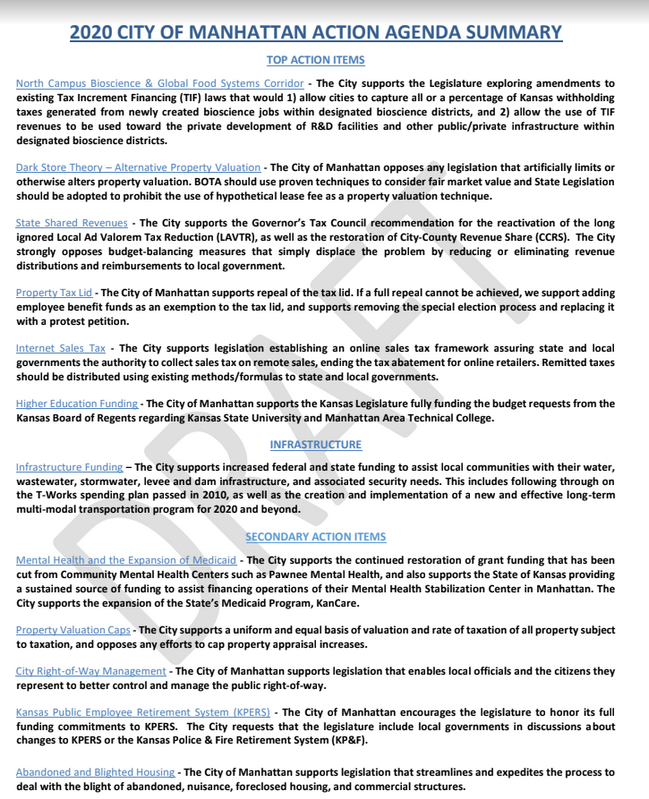