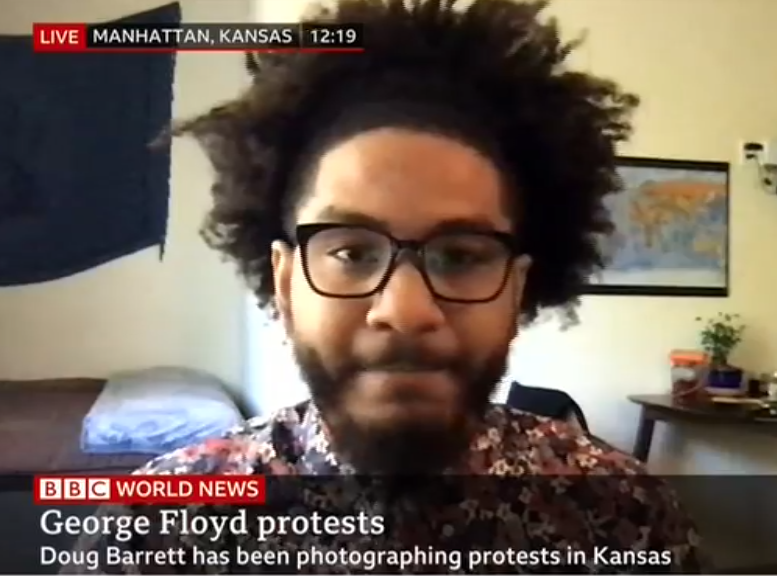 As anti-discrimination and police misconduct protests continue across the country, the voices of those who can speak from the perspectives of both police officers and African Americans offer a noteworthy insight on racism and injustice.

Douglas Barrett, a military veteran and former police officer who is now working in Manhattan as a photographer, recently appeared on BBC World News where he spoke about his experiences as an African American and his efforts to bring certain issues to light through his photography.

“When you’re behind the camera and you’re trying to make your photographs, having an understanding of where you’ve come from being on the other side of the law, it gives perspective into what it’s like to be a black male, a black female or person of color living in America, dealing with these racial injustices that are going on,” Barrett said. “So being able to capture these moments peacefully in Kansas is what I’m trying to do.”

Barrett also shared one of his own personal experiences with discrimination; one in which he was falsely accused of stealing from a local store. Following the accusation, Barrett says he decided to stick around and wait for the police to show up so he could plead his case, knowing full well that he was innocent.

In doing so, Barrett was able to leave without further incident, but was also well aware of the discrimination he had just gone through.

“For me, the police were not the issue,” Barrett said. “It, to me, was the hate, the upbringing, the personal motivations that this individual had against me. It’s the every day life for us. It’s not anything special. This happens to millions and millions of black Americans every single day.”

As he seeks to communicate his message to the world through his photographs, Barrett is attempting to also make it a better place for his children so they don’t have to experience the same problems as him.

“Some of the comments that were made out at the protest were ‘my son’s almost eight, nine-years old and this is his second protest,'” Barrett said. “It struck me because no child should have to continue protesting for black lives being killed on the side of roads or on corners. It’s…it’s just deplorable.”

Prior to his interview with BBC World News, Barrett wrote a Facebook post that was eventually published by Time magazine that stated: “I asked myself every day, do I look like a threat? Does my camera look like a gun? Is my
iPhone charged in case I need it while being pulled over to say my last words to my children? Will I make
it home?”

Having lived in America as a person of color and worked as a police officer, Barrett believes it is now time that things change.

“I’ve lived like this all my life,” Barrett said. “I know many others live the same way and I think it’s time for a change and time for a conversation, to address these matters that are at hand.”