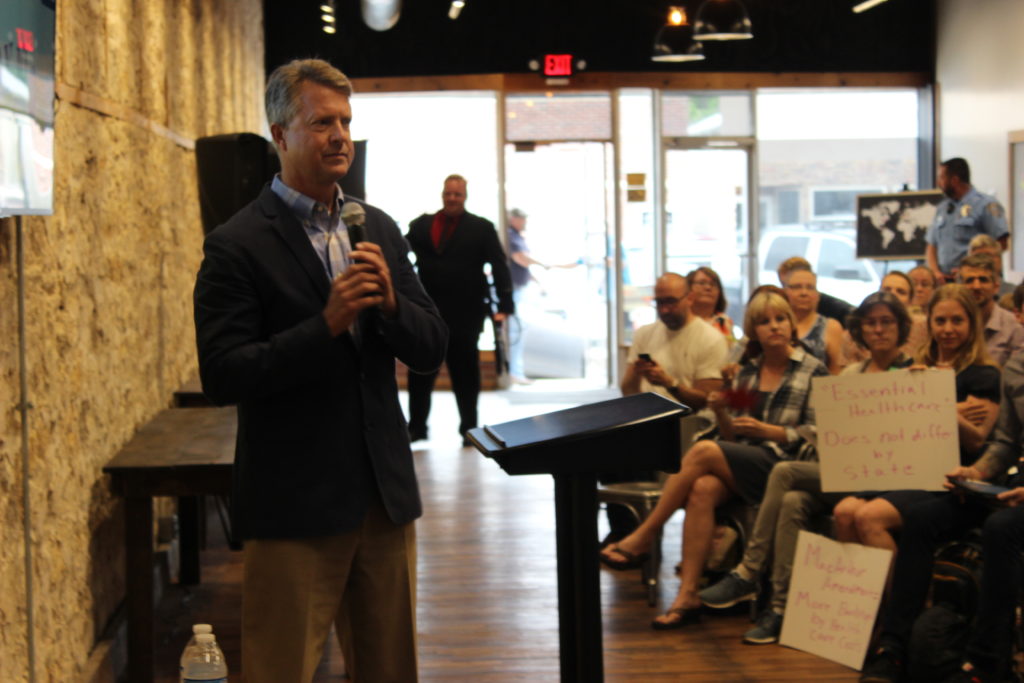 WAMEGO — When U.S. Congressman Roger Marshall hosts a town hall meeting, he usually leads off with the Pledge of Allegiance and a prayer. Something went awry on Wednesday evening at the Ironclad, because the former obstetrician from Great Bend appeared in front of a crowd to boos and jeers. There was no Pledge or prayer heard on the far eastern edge of Kansas’ first congressional district.

The feisty meeting in Wamego follows a trend of incendiary town halls across the country since the beginning of the 2017 term. That did not stop Marshall from criticizing the crowd’s behavior just one minute into his event.

“You know, I’ve done twenty-two of these [town halls],” said Marshall. “This is the rudest audience I’ve had to talk in front of.”

Marshall sat front and center in a chair as his constituents lined up to speak. His vote in favor of the Affordable Health Care Act was the focus of the evening as more than 20 people made their disapproval clear.

“I know you’ve said you don’t like the CBO, but you’re a doctor – you believe in evidence,” stated Jon Herington, a professor of philosophy at Kansas State University.

“What is the precise piece of evidence you have that would show premiums will not increase under the AHCA?” 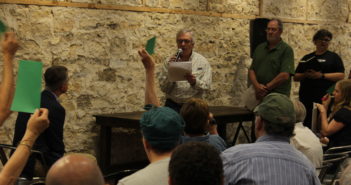 Marshall listened to comments from area residents for just over an hour on Wednesday evening. Earlier that day, the congressman had been in Marysville.           (Staff photo by Andrew Shores)

Marshall doubled down on his criticisms of the Congressional Budget Office, which did not have the opportunity to review the AHCA before 217 republicans voted in favor of it last Thursday. The CBO has forecast “Trumpcare” could leave as many as 24 million people uninsured.

“What we do know is the current system is broken,” Marshall said. He went on to add the six-billion dollar cost of Medicaid is prohibitive to small business growth. Healthcare is like an investment or stocks, Marshall said.

“This bill could be five times as deadly as the 9/11 terror attacks,” said Mike Hankins, a K-State history professor. Hankin cited a 2004 study from Health Affairs journal, which concluded 13,000 people would die as an immediate result of losing health care.

Chants in support of single payer health care echoed throughout the room, as the congressman appeared to be unable to quench his electorate’s thirst for clarity on the contentious new law.

“What are you going to do to protect women’s healthcare just because men don’t have it?” asked Mary Kohn, an assistant professor of English at K-State.

“My specific concern is letting states define what is essential,” said Kohn, who voiced her concerns about a part of the law allowing states to set their own premiums for those with pre-existing conditions. 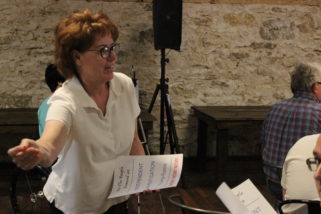 A woman passes out fliers before the meeting calling for an independent investigation into President Trump’s possible ties with Russian operatives. (Staff photo by Andrew Shores)

Just before the halfway mark into the congressman’s one-hour session, a man was escorted out of the building by Wamego police officers. He had been warned by Marshall to watch his language and lower his voice. Marshall fielded questions from a range of topics, including his opinion on President Trump’s proposed tax policy. One woman compared the President’s corporate tax cuts to the 2012 tax policy passed in Kansas. Marshall did not seem to agree.

“It’s my opinion we are comparing apples to oranges. If you want better paying jobs, we’re gonna have to cut corporate taxes,” he said.

In an interview with KMAN after the town hall, Marshall placed blame on Topeka, Washington D.C., and Hillary Clinton for the divisiveness and unrest throughout the Big First.

“I think people are in denial Donald Trump is our President. People woke up to the news on November 9 after being told for years Hillary Clinton would be our next president,” Marshall said.

During the town hall, Marshall fielded questions on the Environmental Protection Agency, White House nepotism, and even net neutrality. Afterward, Marshall commented on a few matters the self-described “rookie freshman” has a better grip on.

“They [the USDA]cut us about six-hundred million dollars,” said Marshall, who serves on the House Agriculture Committee. The latest budget proposal gouged the department of agriculture.

Marshall said secretary of agriculture Sonny Perdue is doing his best to guide the President into good trade agreements, and also keep him in check on the North American Free Trade Agreement, which Marshall said is crucial to his district.

In a time of slumping markets and inclement weather damaging crops, he said maintaining good crop insurance programs is high on his list of priorities.

Marshall also clarified his position on the AHCA, noting he is advocating for disproportionate share payments to be reinstated. The payments, better referred to as DISH payments, were removed under the Affordable Care and replaced by Medicaid expansion funds. Marshall said states such as Kansas, which opted out of the expansion, lost their DISH payments and did not receive Medicaid.