A big change is coming for the Manhattan Mercury.

Ned Seaton, Mercury publisher and editor in-chief, says the newspaper will be switching from five days a week print schedule to three days a week. Seaton says the Mercury will be utilizing their digital platform more and only printing the paper on Tuesday, Thursday, and Saturday each week. He adds that it is tough, but it might actually have an upside for the readers.

“First and foremost we are still publishing in print, and we are doing so three days a week,” Seaton says. “We anticipate that those versions of the newspaper will have a much higher percentage content that is local compared to what we have been putting out. We are going to do our best to serve those readers with the type of newspaper that they will want. We think they’ll like it.”

Seaton talks more about the decision to switch.

“To put it simply we have to cut expenses and this is one way to do it. We didn’t want to cut expenses in a way that cut into our news gathering capabilities. It’s a sign of the times in the sense that we decided to cut back on the print,” he says. 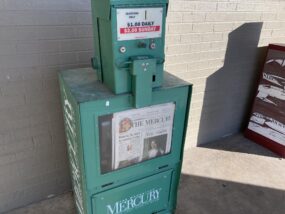 Seaton says that the economics of a print-edition newspaper have taken a change for the worse and it is a trend they have been watching for a while now.

Seaton tells KMAN why now was the right time to make the change.

“We did not want to cut back in the middle of the pandemic, frankly. We made it through the year 2020 with that schedule, but the first quarter of the year is generally pretty weak in terms of advertising volume, so we decided this was the time to move forward with this change,” he says.

He says that the change in the print schedule will also constitute a change to the delivery method. Seaton says they will now be delivering the newspaper in the mail. He adds that the decision to do so was tough because it is leaving several mail route carriers without a job.

“A lot of these folks have been independent contractors with us for many years and have done great work. It’s a hard job, it keeps coming at you everyday, especially on Sunday morning when it’s freezing cold outside,” Seaton says.

Overall, Seaton says that they will take a slightly different approach; using their website for more breaking news while filling the newspaper with more in-depth stories. He reassures that they will still be producing great content with both mediums.