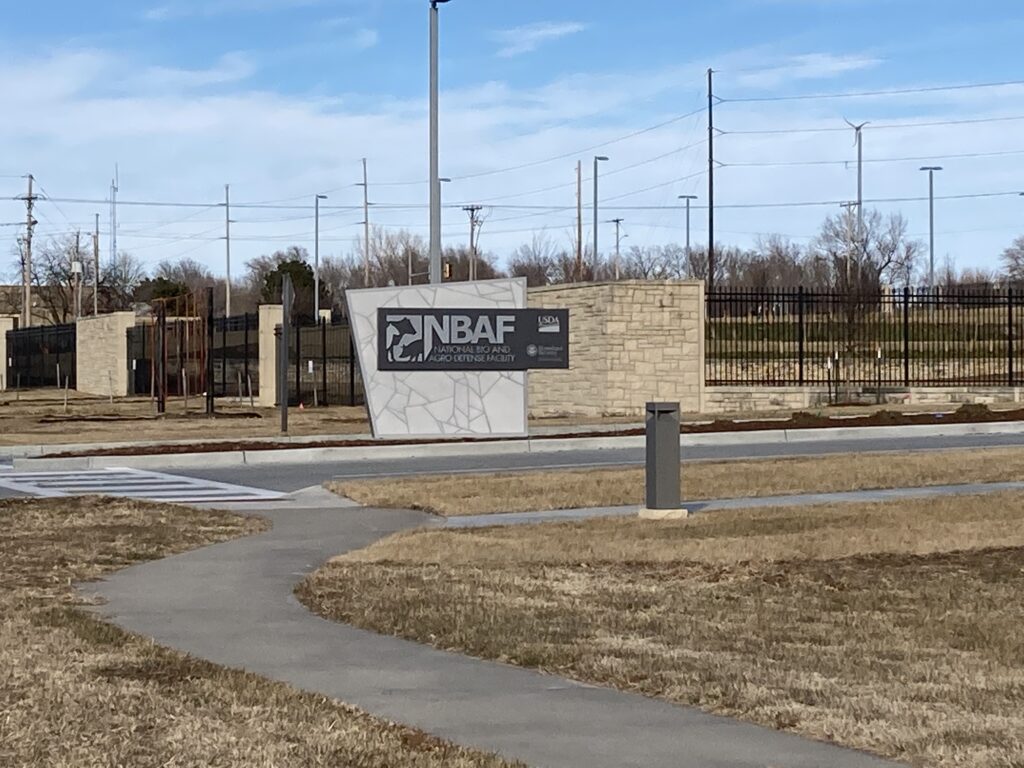 The National Bio and Agro Defense Facility (NBAF) in Manhattan will house several different animal research sectors when it fully opens in the near future.

Dr. Jamie Barnabei, manager of the National Animal Vaccine and Veterinary Countermeasures Bank (NAVVCB), is one of many who are moving jobs from Plum Creek to Manhattan. She says her role falls into two categories: the prevention of animal disease outbreaks and the emergency response. She adds that the vaccination bank she manages exists to prepare for and mitigate the introduction of a high consequence animal disease. Dr. Barnabei says the move to Manhattan is a step forward.

“By moving to NBAF we actually expand our ability to provide protection for our national animal agriculture.”

She says NBAF being built in Manhattan has several other benefits such as a cheaper cost than New York and being in the center of the country, which, in itself, brings several advantages.

“Being in the center of the country, logistically it is easier for us to travel to engage with partners across the country on either coast, and it puts us right smack-dab in that animal health corridor,” Dr. Barnabei says. “That’s a really beautiful opportunity, to be in agriculture country and to engage with those partners and those stakeholders.”

Most of all, though, the move into a state-of-the-art facility, that, quite frankly, the Plum Creek facility couldn’t offer. Dr. Barnabei says that facility is reaching the end of its lifespan, and only offered a level 3 biocontainment instead of the level four containment that NBAF in Manhattan offers.

Last year, the US Department of Agriculture’s Animal and Plant Health Inspection Service (APHIS) announced a $27.1 million purchase of foot-and-mouth disease vaccine for the NAVVCB. It would be used to protect animals in the event of an outbreak and help slow the spread of disease.

With a bio-containment level of four, research at the facility will be one of a kind, but will also require the highest levels of safety protocols and equipment. NBAF Coordinator, Dr. Ken Burton, says the facility was built with that safety in mind though, including the defense against severe weather in the area.

“The facility now is designed so that all pathogens are stored and handled within a secure containment envelope and in an emergency. that containment core, literally locks down like a bolt to ensure that any pathogens remain inside, should there be a risk from a tornado event or other high wind event,” Dr. Burton says.

While a level four bio-containment means more safety protocols and precautions, it also means a higher level of research is possible. Dr. Ken Burton says with the research capabilities of the NBAF facilities, they will have a much larger role than just the health of animals and agriculture.

“The ability of NBAF to be able to research some of these diseases that are considered zoonotic, or can be spread from animals to humans, is critical,” Dr. Burton adds. “Over the last ten years about 70% of the emerging diseases that affect humans have some type of animal component. So, a significant potential role, I think, for NBAF.”

Dr. Barnabei, says the ongoing pandemic is a perfect example of how they NBAF and organizations alike have a much wider focus than just animal health.

“For this vaccination campaign, FEMA has been called in support in their vaccination efforts, and APHIS (Animal and Plant Inspection Service) was requested to provide some assistance to that, and has actually deployed, maybe, over 500 employees across the board, so they aren’t all veterinarians, but a lot of them were,” Dr. Barnabei adds.

She says human, animal, and environmental health all go hand-in-hand, and the pandemic mitigation efforts have really shown a true one-health effort.

During Thursday’s monthly appearance on KMAN’s In Focus, Communications Director Katie Pawlosky also addressed some of the misinformation spreading on social media recently about the facility and says NBAF strives for transparency, with opportunities like the monthly feature on KMAN.

“If anything it’s made it clear how truly important it is to make sure that accurate information is available to the public,” said Katie Pawlosky, NBAF’s Communications Director.

Pawlosky and Dr. Burton appear on KMAN’s In Focus the first Thursday of every month at 9:06 a.m. Their next appearance is June 3. If you missed any of Thursday’s program, it’s available here.

Kelsey Bigelow and Brandon Peoples contributed to this article.