Newly-elected Manhattan City Commissioners were sworn in and a new mayor was chosen during Tuesday’s legislative session.

Linda Morse, Mark Hatesohl and Aaron Estabrook took their oaths alongside an assortment of loved ones. Morse was re-elected to a four-year term after receiving the highest number of votes, Hatesohl returns to the commission for a four-year term after coming in second for most votes, and Estabrook will serve for two years as the recipient of the third most votes in November. 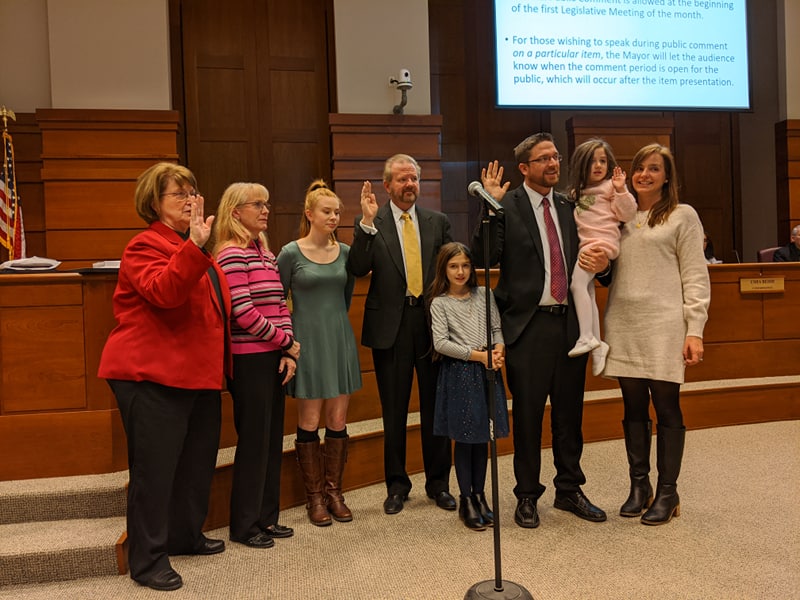 New and re-elected Manhattan City Commissioners are joined by family as they take their oaths of office, January 7, 2020. (Nick McNamara/ KMAN)

Outgoing commissioners took time during the meeting to give their final remarks in office to the Manhattan community. Now-former Mayor and Commissioner Mike Dodson, ending a four-year term, said that the city has a lot of potential and has a lot that “other communities across Kansas and maybe even across the nation” would envy, pointing to things like the under-construction National Bio and Agro-Defense Facility, continued airport enplanement growth and their position in the animal health corridor. Even so, he notes there are some challenges ahead. 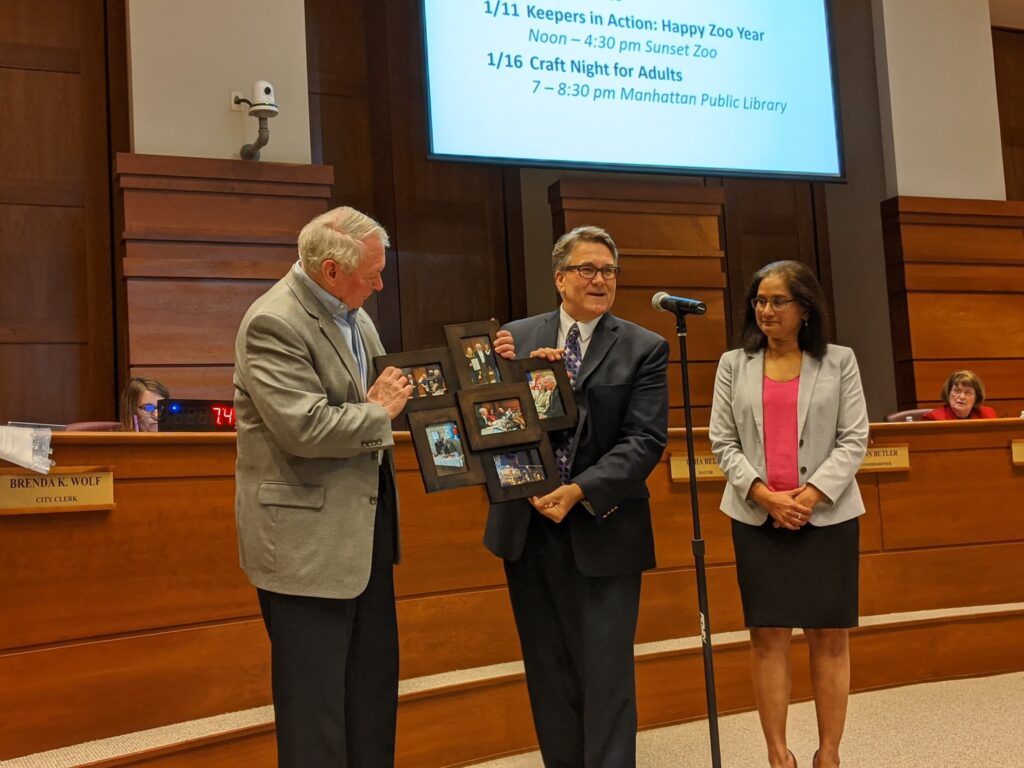 Former Manhattan Mayor and Commissioner Mike Dodson is recognized for his service to the city with a plaque and a photo collage, January 7, 2020. (Nick McNamara/ KMAN)

Dodson says he thinks the investments the city has made in his tenure will pay off down the line. Additionally, the 37-year Army veteran and former commanding general of Fort Riley said serving the city was a great experience — one inspired by the model of his parents — and is looking forward to serving in other capacities in the future.

In his outgoing comments Tuesday, former Manhattan City Commissioner Jerred McKee urged the city to actively encourage and recruit younger people and people of color for city boards and committees. 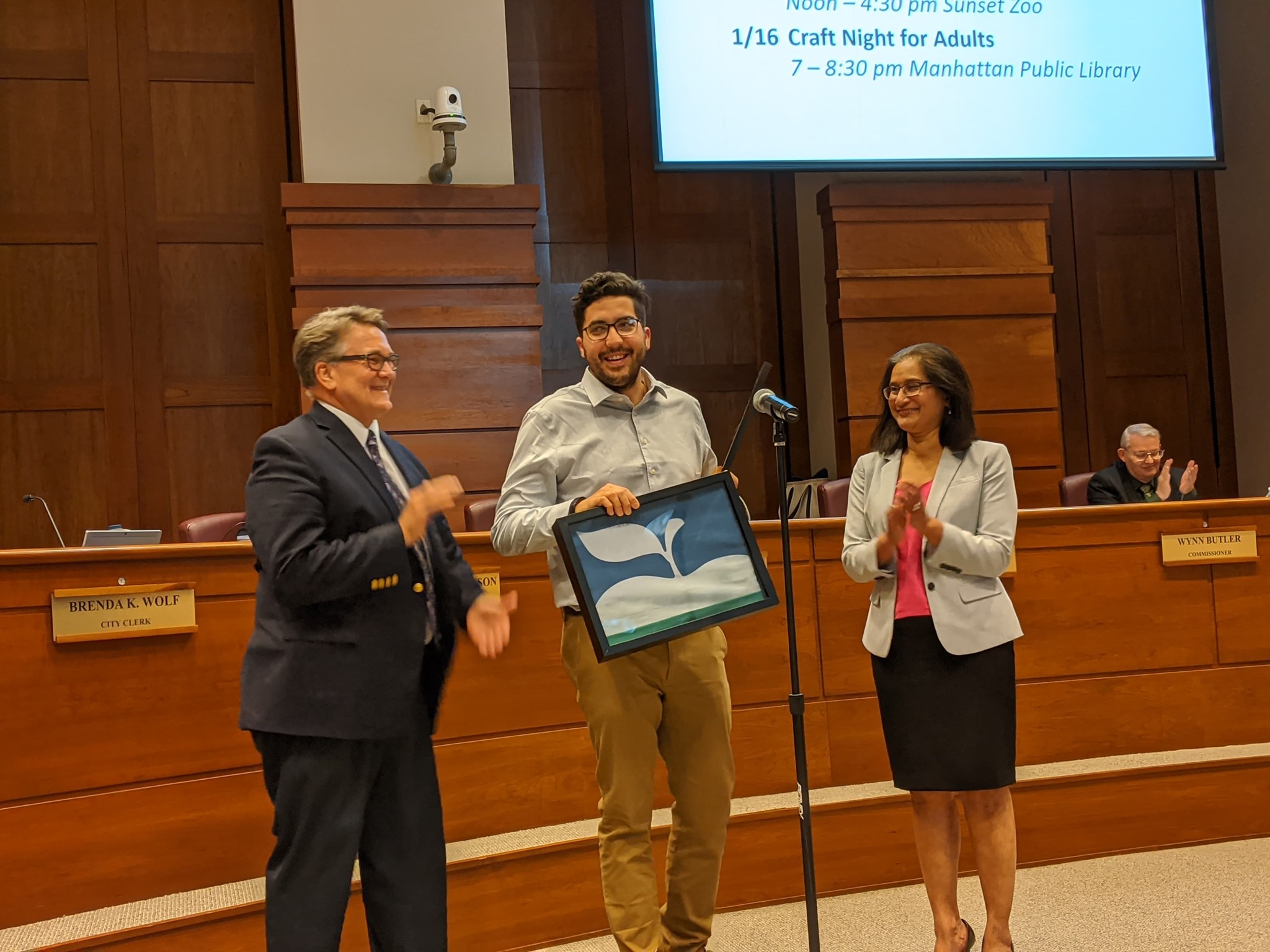 Former Manhattan City Commissioner Jerred McKee is recognized for his service to the city with a plaque, a photo collage, as well as a commemorative flag, January 7, 2020. (Nick McNamara/ KMAN)

McKee, the first openly gay Manhattan City Commissioner, served in the role for a two-year term beginning in 2017. He says “20-somethings” power the city and that if the city hopes to retain KSU grads and young residents they have to include them in community conversations and organizations.

“Don’t think of me as special, because I’m not special,” says McKee. “Find more people who are like me, because they are out there and they’re willing to engage on these issues and be a part of this community.”

McKee says serving alongside his fellow commissioners was a pleasure and closed by expressing his gratitude to the community.

“It’s been amazing and I’m a better human being because I was a part of this,” says McKee. “So, thank you.”

The next step for McKee — Army Officer Candidate School at Fort Benning. He starts Monday. Both he and Dodson were recognized for their service with plaques, photo collages and even a commemorative flag for McKee — who first raised the idea of creating a new city flag. 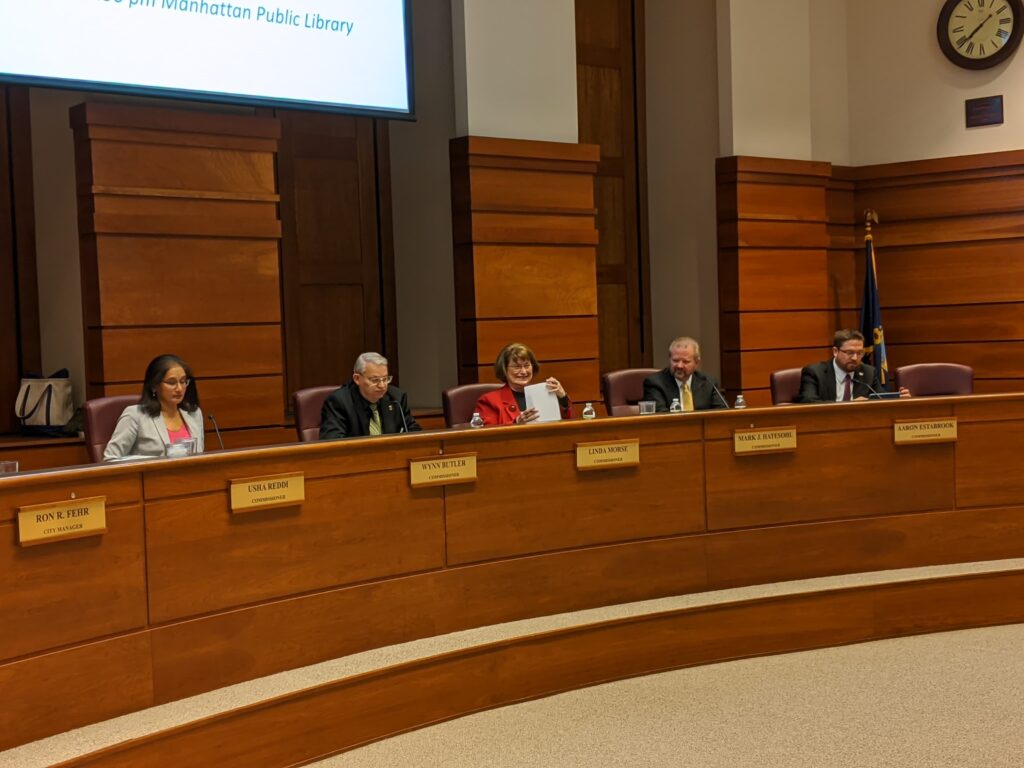 Now two-time Mayor Usha Reddi, following the re-organization, gave her opening remarks. She spoke about the future of Manhattan, saying they have tough choices looming regarding numerous planned projects.

“We’re going to work on timelines and figuring out a way to fund some of these initiatives — but we’re not done,” says Reddi. “We’re not done asking the community’s input, we’re not done with the conversation. Everything is not complete just because we have signed a few contracts and we have made some movement in some areas.”

She also spoke about some of her top priorities, saying mental health services remains on the list and is still a need in the community.

“That means working closely with USD383, Kansas State University, and our businesses to figure out solutions and preventative measures so that we are addressing the invisible scars and pains our children and families are feeling.”

Reddi closed by thanking the community and saying she is looking for people from diverse backgrounds and all age groups to serve on boards and committees that advise the city commission.