You are at:Home»State News»Overland Park councilman charged with misdemeanor battery 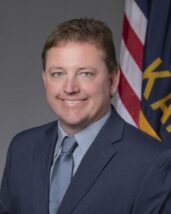 OVERLAND PARK, Kan. — An Overland Park City Council member who is charged with misdemeanor domestic battery has been removed from the city’s public safety committee, which oversees police procedures.

Scott Hamblin was charged after police were called to his home on July 21. No one was injured. Six fellow council members on Monday called for Hamblin to resign but he says he will not do so. Mayor Carl Gerlach said Thursday he removed Hamblin from the committee because it would be a conflict of interest to serve while being investigated by police.

Hamblin’s wife, Curstin, issued a statement defending her husband and accusing the council of trying to score political points from a personal matter.