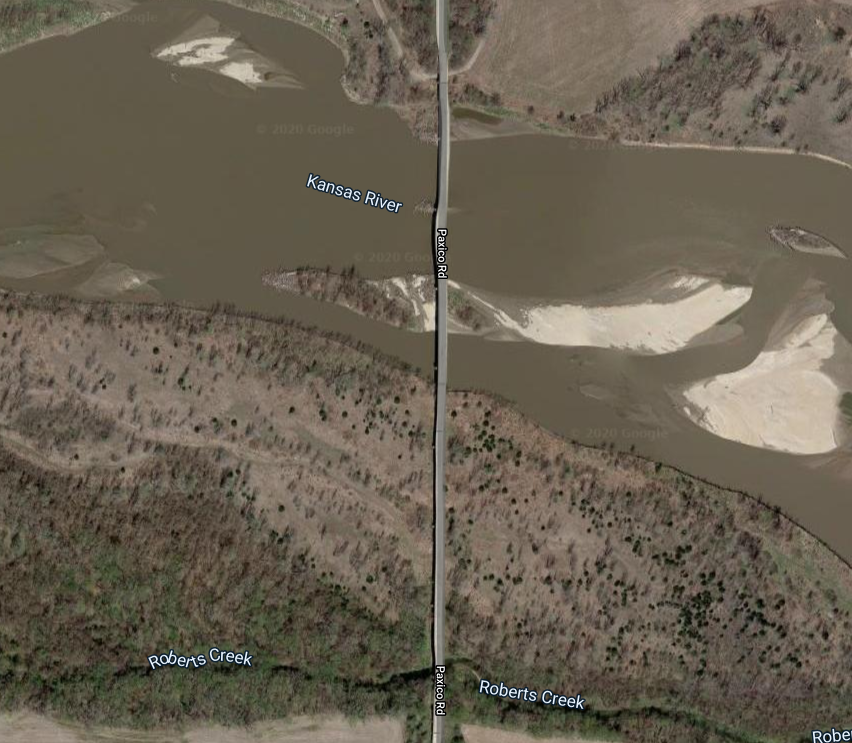 The Belvue Bridge spans the Kansas River southeast of Belvue between Pottawatomie County and Wabaunsee County and has been in place since 1955. (Photo courtesy of Google Maps.)

Belvue Bridge
The Pottawatomie and Wabaunsee County Commissions have narrowed their options for repairing the deck of the Belvue Bridge down to two options.
“One of those was putting a new concrete deck onto the existing steel and rehabilitating the steel,” Peter Clark, Pottawatomie County public works director, said. “It’s service life is only about 40 years. The second option they really were leaning forward on and looking at was the option of removing all the steel that’s there and the existing deck and putting on three new girders and a new concrete deck.”
Option one has a cost of about $7.5 million. Option two costs about $11.4 million but has a life span of about 100 years.
Clark says crews will patch the potholes on the bridge deck with asphalt until more permanent work begins.
“Doing so is a temporary fix and will actually exacerbate some of the problems with the existing deck,” Clark said. “But we’re doing that knowing that we’re moving toward a solution for replacing the deck in some way.”

He also says deterioration of the bridge could eventually lead to a closure until long-term work is done.

Long-term construction and rehabilitation on the bridge likely will not start any sooner than late 2021.

In the meantime, the two commissions are exploring an 83-17 cost share with Pottawatomie County paying for the larger portion. However, these percentages could change.
Pottawatomie County is also looking at a Kansas Department of Transportation cost-share program that could cover up to $900,000 in project costs.
Potential resuming of jury trials
The Pottawatomie County Attorney’s Office is hoping to resume jury trials following delays brought on by the coronavirus pandemic.
Sherri Schuck, county attorney, says a plan for resuming trials that will soon be submitted to the Kansas Supreme Court includes making PPE available, regulating entrances and limiting courthouse accessibility on certain days.
“We do intend to basically close the courthouse down to nonessential business on the days we pick the jury because that’s when we will have the most people at the courthouse and that’ll be on one day,” Schuck said. “So we will pick them that whole day and then we’ll actually start the trial the next day.”
She says Attorney’s Office staff will also need to be trained on handling case evidence.
“What we will have to do is change how we present evidence in court because we are trying to keep it from being physically handled, which means our staff will now have to learn how to powerpoint, how to be a lot more involved in our trials and set up,” Schuck said.
The Pottawatomie County Justice Center in Westmoreland has two courtrooms that can be used for jury trials.
Only one will be used for such trials until normal operations resume.
Highway 24/Crown C Circle project
The Pottawatomie County Commission Monday accepted a roughly $1.31 million bid for the Hwy. 24/Crown C Circle project.
The vote was 2-0 with commissioners Dee McKee and Greg Riat supporting. Commissioner Pat Weixelman abstained, but said he was interested in delaying any acceptance of bids to see if KDOT would be willing to provide additional funding. KDOT is currently chipping in about 1.1 million dollars, leaving the county on the hook for about 170 thousand dollars in construction costs.
Commissioner Greg Riat voted to accept the bid, basing his decision on input from Clark that requesting more funding for just this project could negatively impact ongoing negotiations to obtain more KDOT funding for another Hwy. 24 project at Green Valley Rd..
Weixelman abstained from the vote due to a conflict of interest.
The commission recently rejected bids for the Hwy. 24/Green Valley Rd. project because the low bid came in about 22 percent above the estimated cost.
Share. Twitter Facebook Google+ Pinterest LinkedIn Tumblr Email