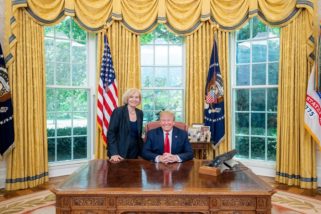 On a recent trip to speak to the president’s cabinet, a Pottawatomie County commissioner was able to meet with President Donald Trump.

Commissioner Dee McKee was in DC last week to talk to the president’s cabinet on how local issue are impacted by rules and regulations from the federal government. She met with members of the Department of Agriculture, Transportation, and the EPA.  After their meetings, McKee and seven others were led to the oval office to meet President Donald Trump.

McKee says the experience was humbling as she was able to stand in the oval office where so much has been done. Trump then shook their hands and ask them questions about their concerns.

“I really think [Trump] is looking in the business world to find out the kinds of things that can be more more effective or efficient in terms of programs,” says McKee.

McKee says while their conversations were quick, the president did ask them questions about their concerns. He then got them in contact with the appropriate department heads.  Her biggest concerns she shared with the president involved transportation and the agricultural embargo.

McKee added she still gets goosebumps thinking about the meeting.