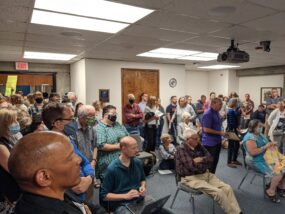 A packed crowd during Wednesday’s USD 383 meeting for public comment in regards to culturally responsive teaching and learning training.

More people spoke either for or against a recently approved and later withdrawn purchase of educator training sessions at Wednesday’s USD 383 school board meeting.

The public outcry is largely influenced by the Riley County Republicans who strongly oppose culturally responsive teaching and learning training, which they said would lead teachers to instructing Critical Race Theory (CRT).
The board heard from members on both sides of the aisle, including Manhattan High School Students. Junior Class President Ava Reese said she wanted to address comments made during the previous meeting.
Ava Reese

Another student, Sam Delong, says he has been studying CRT for his debate team.

Delong urged the board to recognize that staff in the district do not have the resources to properly address racial issues.  He cited incidents where teachers either let students say something racist or were racist towards students themselves.

The board also heard some personal experiences from people of color in the audience. MHS American Literature Teacher Mac Phrommany started off by stating he is from Manhattan because people ask him “if he is from here.”

Phrommany says the application of a critical lens to shared but differing histories will allow us to understand each other.

K-State Assistant Professor in Social Work Dr. Lorenza Lockett also shared his experience of being black in America. He told the story of a little girl in Oklahoma calling him the N-Word.

Lockett says white students in his class have felt betrayed because they were not being told the black side of history.

Resident Kim Zito, who is of Asian descent, spoke about her own experience with a teacher who scolded her for wearing a hat in the hallway, speaking down to her as if though she couldn’t understand English.

On the opposing side, Manhattan City Commission candidate John Matta spoke about the responses the board made after the previous meeting’s public comments.  Matta also spoken during that time as well.

The other book stated the only remedy to previous discrimination is future discrimination. Matta says concerns would be eased if the board disagreed with these ideas and being taught as fact.

On its website Better Lesson says it believes that in order to establish a culturally responsive classroom, teachers must ensure that students have both the historical context and appreciation for different perspectives to empathize and engage respectfully with those from other cultures.

Christine Weixelman, who is running for a seat on the school board, says there are already multiple methods and programs implemented in the district that address diversity issues.

Weixelman says some of the resources in the training reduce cultural differences to the color of a person’s skin.

After hearing from 22 community members, the board was able to respond to the comments. Board Member Katrina Lewison addressed the first email sent by the Riley County Republicans that started this discussion, titled “District School Board Votes to Teach Students How to be Racist.”

Lewison says she was sad to hear members of the community state that systemic racism and implicit bias are not real.

Board President Jurdene Coleman, while fighting through tears, says it was hard to sit there and hear community members negate her experiences of being black.

Coleman says she is grateful for those wanting to have this conversation, but it is very exhausting and unfair for her having to validate her experiences.

You can hear all 22 public comments here.