The Riley County Police Department is looking at using unspent personnel funds in the budget for multiple end-of-year expenses.

As of the most recent payroll period, RCPD reported 18 unfilled positions which explains the left-over dollars. Currently, the department is down four police officers, 12 corrections workers, as well as a communications and civilian employee to round out the 18 open jobs. The figures were presented at November’s Riley County Law Board meeting.

This has resulted in a ‘conservative’ estimate of $500,000 anticipated to be left over at the end of the year.

“We think it’s more prudent to use those unused personnel funds on legitimate purchases, keep our carry-over at a minimum,” says Director Dennis Butler. “That way, future budget discussions are more predictable and the tax liability is less extreme.”

Cpt. Josh Kyle says if the funds continue to go unused, they get classified in the budget as carry-over funds. Due to the relatively unique governing and funding status of the RCPD through the Riley County Law Enforcement Agency board, funds dedicated to the police agency must be used on police matters.

Allowing the unspent funds to carry over to the next budget year “reduces the tax obligation for the taxpayer the following year — not this next year, not 2022, but 2023” according to Kyle. This means those funds would be deducted from budget allocations by Riley County and Manhattan to the board, resulting in a budget decrease that could put the department in a financial bind should they manage to fill the vacant jobs unless granted greater funding.

“I would rather fill my positions, because when they’re not and overtime and scheduling occurs suddenly to make sure we can cover things it creates stress on the employees, burnout starts to occur, we lose more employees,” Butler says.

“This is almost as extreme as it was in communications when I first arrived here. We are starting to see some of those signs because of the short staffing. That division is authorized 50 positions and there’s 12 vacancies so I’ll let you do the math.”

RCPD is hoping to keep the carry-over to between $80,000 to $120,000 and keep on track with carry-over amounts seen in prior years. As such, they detailed plans to use unspent personnel funds to bolster the department’s health and worker compensation fund, purchase software to assist in finance department upgrades, as well as to purchase a pair of trucks for maintenance and towing purposes.

“I think this is going to be a complication, an issue, for probably the next couple of fiscal years,” says Law Board member and Riley County Commissioner John Ford. 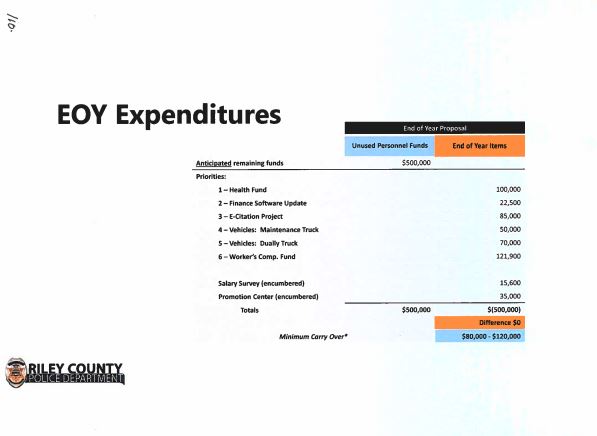 In other business, an audit of the department’s 2020 finances found no material issues though a few deficiencies have persisted.

“We have noted that the Law Board and RCPD want a new full-time accountant,” says Jacob Kujath of Sink, Gordon & Associates. “[Their] payroll accountant started recently and [RCPD] also hired a part-time accountant, so there’s a possibility that we could possibly lower this finding in future years.”

The other deficiency was related to tracking accounting records, which is done on multiple different systems. The department was authorized in 2019 to update the system and streamline the accounting process, but that was delayed by the COVID-19 pandemic.

“Hopefully by fiscal year 2022 everything should be implemented and hopefully be able to get removed completely.” 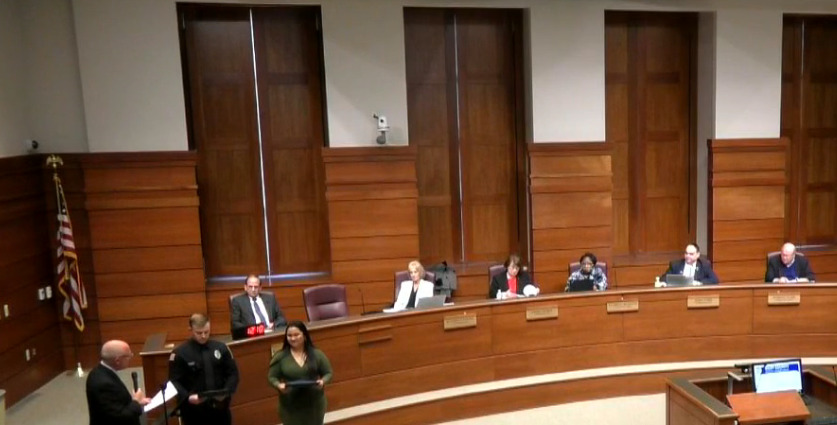 Dispatcher Teresa Taitano and Police Officer Jake Shailer were also recognized for their role in saving the life of a woman experiencing cardiac distress on July 9, 2021. They were presented the RCPD’s Life Saving Award at the Monday meeting.

“Dispatcher Taitano stayed on the phone with the family members who were present and over the next several minutes provided crucial, step-by-step instructions on how to perform CPR,” says Butler. “Dispatcher Taitano was able to do all of this while remaining calm and clearly counted out loud with the family members to help gauge the proper pace for chest compressions.

Not breathing and with a weak pulse, the woman was brought to Topeka for care — ultimately recovering and returning home. She and her family then reached out to the department to express gratitude for the actions of Shailer and Taitano. The two declined to speak at the meeting.

“I think it’s important that we have those outstanding staff members, officers, who were involved in such life-saving things be recognized with this board,” says Chair Linda Morse. “We need to call attention to such just really important events in our lives.”