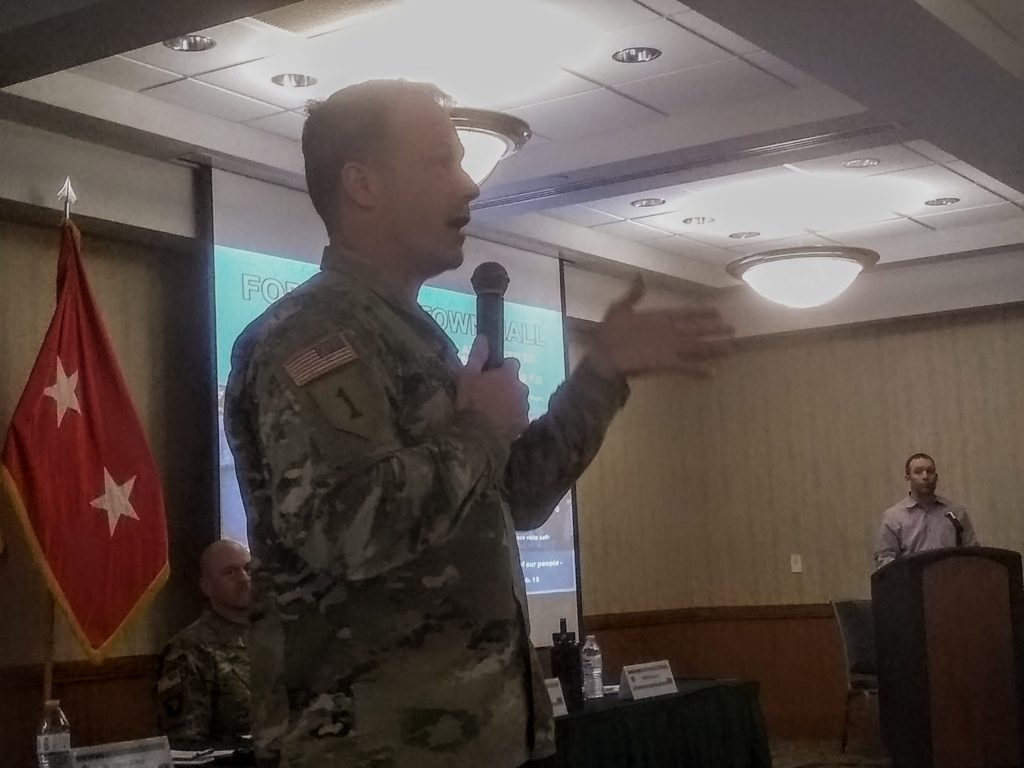 Housing policy, fee structures and unattended maintenance issues were among topics discussed at a town hall on housing conditions at Fort Riley on Wednesday, Feb. 26.

Leaders of Fort Riley and its housing services were at town hall meetings in Riley’s Conference Center on Feb. 26 and 27, part of an Army-wide effort to review conditions in Army family housing and ensure the post is meeting safety standards. Poor housing conditions across multiple branches were highlighted in a hearing by the Senate Armed Services Committee earlier in February. The Department of the Army Inspector General will be holding an additional three town halls in Riley’s Conference Center between Monday and Tuesday, March 4 and 5, to hear residents perspectives on housing and administer resident satisfaction surveys and no Fort Riley leadership will be present.

Army Secretary Dr. Mark Esper has said he’s troubled by the reports of conditions in some family housing units.

“It is unacceptable for our families who sacrifice so much to have to endure these hardships in their own homes,” Esper says. “Our most sacred obligation as Army leaders is to take care of our people — our soldiers and our family members.”

“There are instances across the army across installations where we are not delivering safe and high quality housing to our soldiers and our family members,” says 1st Infantry Division Commanding General Maj. Gen. John Kolasheski.

To assess the state of housing at Fort Riley, Kolasheski and Garrison Commander Col. Stephen Shrader have tasked housing assistance teams to reach out to all residents of family housing to address any quality concerns. By the end of February, they had assessed 44 percent of the 3,500 occupied homes on post. They’ll also be looking at all barracks as well. Shrader says they’ve received spectacular feedback and doesn’t want anyone to feel like they can’t come forward with a housing issue for any reason.

“That’s the purpose of these town halls is to hear from the residents and the soldiers and the families and the community on the housing that you have and the maintenance capacity of those houses,” Shrader says.

While the majority of comments were regarding policies, some spoke up about deferred maintenance, heating issues and poor customer service. One resident says her home had ducts that hadn’t had necessary cleaning done in 15 years, appeared to have mold that wouldn’t come off and wouldn’t stay warm.

“My baby’s cold, I’m sick constantly,” she told the panel Wednesday. “I’ve had this same cold for a month and a half now.”

All leaders expressed concern and Shrader directed garrison staff to get her contact information to begin addressing her concerns that night. Fort Riley reports that a review of work order requests showed no ongoing issues affecting life, health or safety.

Another resident on her third duty station says she can understand why some have fear about coming forward.

“The last two [posts I was stationed at]there were repercussions [for speaking out]and it’s scary — I mean, we’re one of how many? Our voice is about that big,” she told the panel, gesturing with her fingers.

Shrader says to take record of the name of anyone giving out false information or trying to make residents feel as though they can’t come forward to resolve an issue after trying to go through official channels and bring their concern directly to the Garrison Office or to Housing Services. Director of Housing Services Steve Milton says he wants to proactively solve issues and be advocates for residents, but he can’t help if they don’t know about it.

“Not only on post, but also the landlords who live off the installations,” Milton says. “So give us a call and we can be your advocates and ensure you’re getting what you should be getting legally, morally and ethically.”

Corvias Director of Operations Angela Watson says she wants to try to rebuild trust with the community that they serve after hearing a wide range of feedback that included specific criticisms of her.

“It’s hard to hear sometimes, but also it makes me excited because there’s so many easy ways that we can make things better,” says Watson.

The next town halls will take place Monday, March 4 at 2 and 6 p.m. as well as Tuesday, March 5 at 10 a.m. Fort Riley and housing leadership will not be present. They will also perform a Resident Satisfaction Survey there.