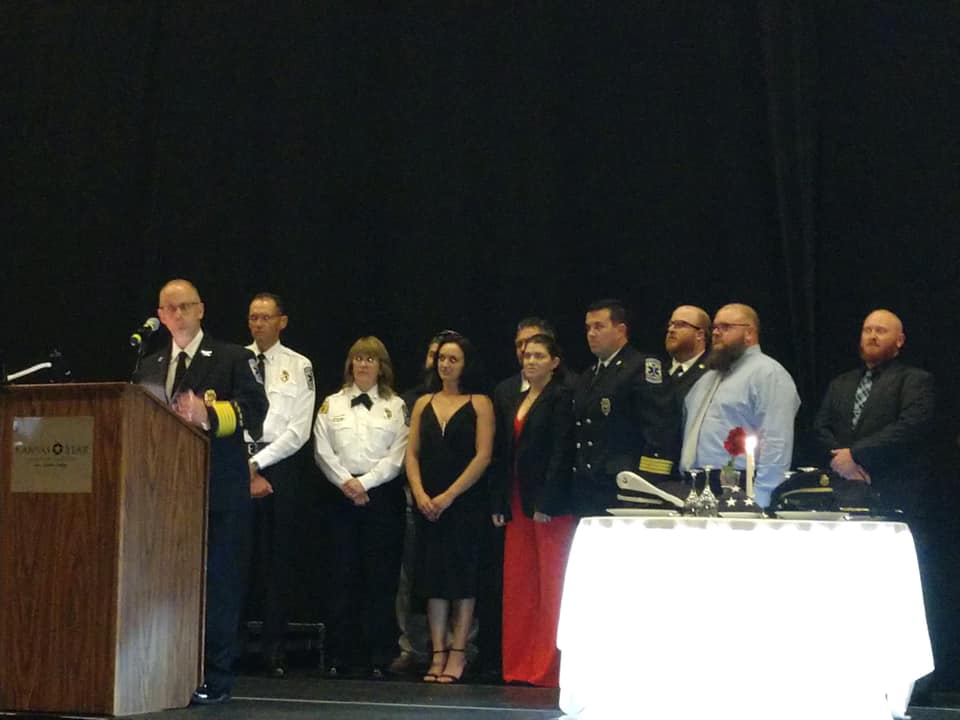 Riley County EMS was recently awarded the 2019 career EMS service of the year from the Kansas EMS Services Association.

Assistant EMS Director Josh Gering recently spoke on KMAN’s In Focus about their award saying this isn’t the first major award they have received.

“In 2018, we actually received the KAMZA community outreach of the year award so this year we kind of graduated on up to the career service of the year award. It’s nice to be recognized by the state of Kansas,” Gering said.

Gering says they try to be involved with the community as much as possible with different programs such as stuff the bus and fill the truck during the holiday season.

Gering also spoke Tuesday about how construction around Manhattan has impacted ambulance response times, noting they are staying on top of construction through a heads up display program inside the ambulance.

“We routinely update that with any road construction and with pre-planned alternate routes. That’s immediately visible by our responders while en route to a call,” Gering said.

Gering says paramedics have had training on the routes throughout town to know which detours they can take and get to their destination as quickly as possible. He also spoke about how they measure  response times.

“We have two performance metrics. The first one is the shoot time, the time when tones go off to when you’re in the truck and en route. Our goal from 7 a.m. to 7 p.m. is 60 seconds and 90 seconds from 7 p.m. to 7 a.m. The other is response time and that is from time you go en route on truck to the time you arrive on scene,” he said.

The industry standard is to maintain a six minute or less response time in 90% of their jurisdiction, which Gering says they are able to maintain.

Another factor to improve response times is the ongoing emergency radio system upgrades in Riley County. Gering says the current system presents a challenge to their department when responding to a call, depending where they are at geographically. He says it’s a phenomenal step to undergo this upgrade. Final tower location approval was given recently with construction expected to begin by summer 2020.

Two upcoming local consult meetings from the Kansas Department of Transportation will be looking at potential major projects eligible for funding.

At least one Pottawatomie County Commissioner is hopeful to get a regional partner to pitch the idea of gaining funds for a future bridge across the Big Blue River connecting Junietta Road in Pottawatomie County and Marlatt Ave. in Riley County. Any such project would likely need a regional partner. Riley County Commissioner Marvin Rodriguez says it’s not a benefit to his constituents and it’s too costly.

“Most of those projects are 50-50 or 25-75 type of donations. With the mood of the county and commission on where we’re at with the latest mill levy increase, I don’t see it working. Mostly it’s a convenience for Pottawatomie County,” he said.

The idea for a bridge has long been advocated for by Pottawatomie County Commissioner Dee McKee, who sees benefit due to the growing area of Blue Township and the desire for an alternative to Hwy 24 into Manhattan. In order to advocate for KDOT funding the two entities would need to enter into an regional partnership. Two local consult meetings are planned Aug. 19 in Salina and Aug. 26 in Topeka. Rodriguez says such a project presents a lot of challenges.

“The (proposed) road goes back through a bunch of residential area and then it has to go south onto Highway 24, so I don’t know if that would be a big advantage for anybody. It doesn’t go into an industrial area of commercial area,” Rodriguez said.

Two local consult meetings for KDOT funding are planned Aug. 19 in Salina and Aug. 26 in Topeka where counties can submit requests for funding on potential major projects. Other potential projects that may be eligible for KDOT funding assistance in Pottawatomie County may include expansion of Hwy 24 to six lanes or possibly Hwy 99 improvements from Hwy 24 north to Marshall County.

McKee said Monday she plans to reintroduce her desire for a Junietta Road bridge during Thursday’s joint meeting between the two counties and the City of Manhattan.